Vladimir Putin is ready for anything for "his" Great Russia ("Geopolis", France) 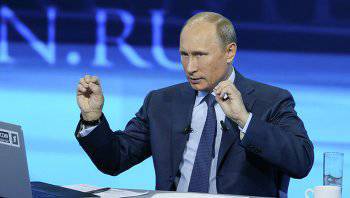 After the Kremlin adopted the anti-homosexuality laws Putin’s policies again came under fire in both Russia and the international arena. Vladimir Putin has been running the country with an iron hand for 15 for years and doesn’t shy away from human rights violations, hoping to return Russia to its former greatness.


One of Putin’s tasks is to recreate the great Russia and become the one who will rule it. This goal justifies any means. So the leader of the democratic party "Yabloko" Grigory Yavlinsky describes Vladimir Putin, who has led the country for the past fifteen years. Such a description says a lot about how the president of the Russian Federation perceives his goals.

Putin is gripped by nostalgia for the great past of Russia and wants to regain her leading position in the international arena. According to him, such greatness is impossible without national unity. A few days before being re-elected as President of Russia in 2012, he spoke about unity in a speech before members of the lower house of parliament. “Russia is one, and its modern, advanced development must become a goal uniting all the political forces of the country who want to work for creation,” the president said. In addition, in 2012, the “spiritual unity of the Russian people” was given a prominent place in the election program of the United Russia party, which was then headed by Putin.

Vladimir Putin is ready to do anything to preserve unity, so dear to him. Any political oppositionist, any journalist who gets out of this jet seems to him as an obstacle.

The last victim of the policy of eliminating all those who disagree was lawyer and political activist Alexei Navalny, who became famous for criticizing Russian corruption in his blog. In July of this year he was given five years in prison for plundering funds. The European Union and the United States promptly dubbed this process political.

The government does not tolerate the slightest disagreement and criticism, and therefore has made the media its priority goal. According to Reporters Without Borders, from 2000 to 2011, 26 journalists died in Russia in a year.

Putin on the path of war with Islamism and "decline"

French writer of Russian origin Vladimir Fedorovsky says that Putin considers Obama and most of the world leaders "mediocrity, who are not able to see the most serious problems of Islamism and decline."

Putin’s war on Islam quickly found the battlefield: Chechnya. In this Russian republic with a predominantly Muslim population, at the suggestion of the Kremlin, abductions and disappearances of people are becoming more frequent. Most of them expect torture, and they will never be able to return home.

Vladimir Putin seeks to prevent the spread of "vicious" Western mores in order to prevent a "decline" in the country. As part of the campaign to protect traditional values, the authorities adopted two laws that created opportunities to condemn homosexual relationships. Homosexuality was considered a crime in the country up to the 1993 year, was considered as a mental illness up to the 1999 year, and is still perceived very negatively.

Ctrl Enter
Noticed oshЫbku Highlight text and press. Ctrl + Enter
We are
Yavlinsky is dreaming of victory over Putin, or Yabloko on a sliceResults of the week. "The apple from the apple tree falls much further than you think."
Military Reviewin Yandex News
Military Reviewin Google News
114 comments
Information
Dear reader, to leave comments on the publication, you must to register.