Suvorov and Nakhimov schools overcome the era of timelessness

August 26 2013
31
21 August 1943 year. In the Soviet Union, a landmark decision. It is connected with the need to take urgent measures to restore economic activity in those areas of the country that were completely liberated from the occupation of the German fascist troops. The resolution is adopted by the Council of People's Commissars of the USSR, and the responsible persons proceed immediately to implement it.


One of the segments of the decree is the creation of new educational institutions in which mainly children of fighters will be trained, whose fathers have not returned from the Great Patriotic War fronts. From the decision of the Council of People's Commissars of the USSR 21 August 1943 year:

For the device, training and education of children of the soldiers of the Red Army, the partisans of the Patriotic War, as well as children of Soviet and party workers, workers and collective farmers who died at the hands of the German occupiers, organize nine Suvorov military schools, such as old cadet corps, 500 people in each total 4500 people with years of study 7, with a closed boarding house for pupils. 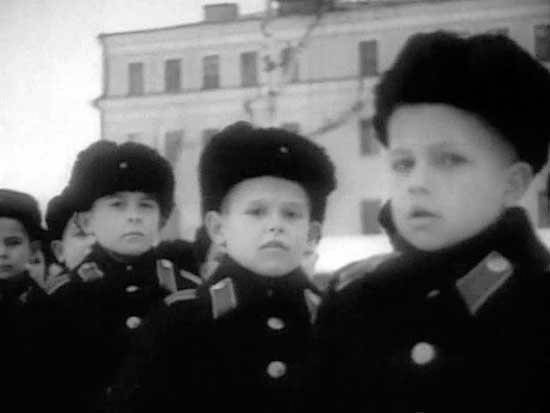 The resolution itself says that the Soviet leadership of that time set itself the task of creating military schools, principles of teaching young people that would be similar to the principles of teaching young people in pre-revolutionary Russia cadet corps. This is a question about the connection between the times and statements about the fact that the Soviet authorities at one or another historical stage did not take into account the positive experience of the Russian Empire.

In the shortest possible time, the People's Commissariat of Defense (it is worth recalling: in the conditions of a continuing war!) Realizes the task set, opening military educational institutions in nine cities of the Union, named after the great Russian commander-winner. By November 1943, the Suvorov schools appeared in Astrakhan, Voronezh, Yelets, Kalinin (now Tver), Kursk, Maikop, Novocherkassk, Stavropol and Chuguev (Kharkiv region).

In addition to these educational institutions, five more schools were opened as soon as possible for the children of the dead soldiers and officers, three of which became Nakhimov’s (in Leningrad, Riga and Tbilisi), and two were military schools for children of border guards (in Kutaisi and Tashkent).

Literally, teachers for the Suvorov schools were searched all over the Soviet Union, because in this case, the future military elite of the country needed not just civic educators to train and educate, but people who, as they say, know firsthand the smell of gunpowder. The main personnel department of the People's Commissariat of Defense, considering that experienced officers are needed at the front, carried out truly jewelery work, having carried out a full-fledged personnel selection from among those military personnel who had both pedagogical experience and participation in combat operations. On the shoulders of these people had the mission to teach children of war the tricks of military affairs, the basics of dealing with various types weapons and increase their overall literacy.

It is noteworthy that in order to attract officers-teachers to the Suvorov military schools, he raised the salary on 10-15% in relation to the salary of teachers who worked in ordinary military schools. The management team received about a quarter more for their work than colleagues in high military schools. This material incentive played a significant role in the development of the first IEDs and staffing them with truly professional personnel. And the students often turned out to be a match for their teachers.

At the desks of several IEDs, there were truly heroic guys, many of whom once served in partisan detachments, fought on the streets of Stalingrad and Voronezh, helped to transport the wounded to evacuation hospitals, to deliver correspondence to the front-line. One of these heroic pupils of the VCA opened in 1944 in Kazan was quite young Ivan Pakhomov. He was a young soldier of the reconnaissance squadron of the 115 Cavalry Division. During the execution of the reconnaissance operation, he was seriously wounded, but after treatment at the hospital, he returned to the front. For the courage shown in the performance of operations, young Ivan was awarded a medal for bravery and received the title of corporal. After that, he was sent to the Suvorov Military School.

To raise the spirit of young Suvorov people, the People's Commissariat of Defense decides, let's say, in advance to award these educational institutions - to hand them to the leaders of the Red Martial Banners.

From the time of the first academic year, we have reached unique data on the performance of pupils in Suvorov schools. The best performance was demonstrated by cadets of the Stavropol Suvorov School. All 507 students in the 1943-1944 school year passed certification without having unsatisfactory grades. General performance indicators for IEDs were as follows:

4537 cadets were trained at the first ITS, of which 4509 people received certified status.

By 1945, the positive experience of the Suvorov schools was decided to take into account when working with the allied armies. Thus, the children of the dead Yugoslav army fighters were sent to the preparatory classes of the existing SVU, which gave educational institutions the status of international (international). During the first years of IED work, the issue of increasing the number of Suvorov schools in the Soviet Union was repeatedly raised, as the number of people willing to study in them grew at an incredible pace.

In the same year, 1945, the decision was made to open a special Military Pedagogical Institute in Moscow, cadets from one of the faculties of which were to become mentors of Suvorov and Nakhimov students in the future.

Over the years of its existence, the Suvorov and Nakhimov schools managed to acquire their own glorious traditions. Schools opened and closed, reorganized and transferred from one city to another, but this did not interfere with preparing qualified replenishment for the army and fleet. Tens of thousands of graduates left schools, many of whom in the future became career officers, generals, and even political figures. Cosmonaut Vladimir Dzhanibekov, ex-Minister of Foreign Affairs Igor Ivanov, head of the main personnel department of the Russian Defense Ministry Mikhail Vozhakin, ex-commander of the North Caucasus Military District Viktor Skokov, chief of the General Staff of the Russian Federation Valery Gerasimov, Olympian Vadim Emelyanov. This list goes on for a very, very long time.

Surprisingly, even after the collapse of the Soviet Union, the Suvorov schools were able to survive. Recruitment in many of them was reduced, but in general the education system did not suffer serious damage. The most sad times for the SVU came at the first stage of the realization of the new military reform (2009-2010 years) into reality. The reformatory machine “walked” through Suvorov as an asphalt road on the grass. The results of the reform were truly crushing: lessons on military etiquette and military training were withdrawn from the training process, Suvorov students were excluded from participation in military parades on Red Square, the solemn ritual of accepting young people to Suvorov and Nakhimov was disappeared. The road for admission to military schools on special grounds for graduates of IEDs was closed. In fact, the schools turned into ordinary secondary schools, and their military status was finally dispelled.

Famous graduates of the SVU repeatedly appealed to the then Defense Minister Anatoly Serdyukov and President Dmitry Medvedev, calling for measures that would stop the degradation of military schools that forged the real Soviet and Russian elite for decades. Heads of schools addressed high state officials, frankly calling the course of reforming Suvorov and Nakhimov educational institutions a lawlessness. Officials pretended that appeals were something like spam, and did not bother to respond to them. Like, what to take with the "green men", let them write ...

Today, when Suvorov schools celebrate their 70 anniversary, a sober decision has finally been made to return elements of military training to these educational institutions. In addition, several months earlier Suvorov was allowed to take part in a military parade on Red Square again.

The representative of the main personnel department of the Ministry of Defense Igor Muravlyannikov stated:

We return to the system of education and training of Suvorov, Nakhimov and Cadet attributes of army and naval life, the fulfillment by them of those elements that are provided for by general military regulations. Military etiquette, a platoon system and the assignment of cadet military ranks will return to the daily life of the pupils. They, as before, will participate in parades and military rituals of garrisons.

I want to believe that three years of no-time for IEDs did not become that pit in which glorious traditions are buried. I would also like to believe that Suvorov, Nakhimov schools and cadet corps will continue to release people from their walls who are capable in the future to bring invaluable benefits to the country in which they studied and were brought up. 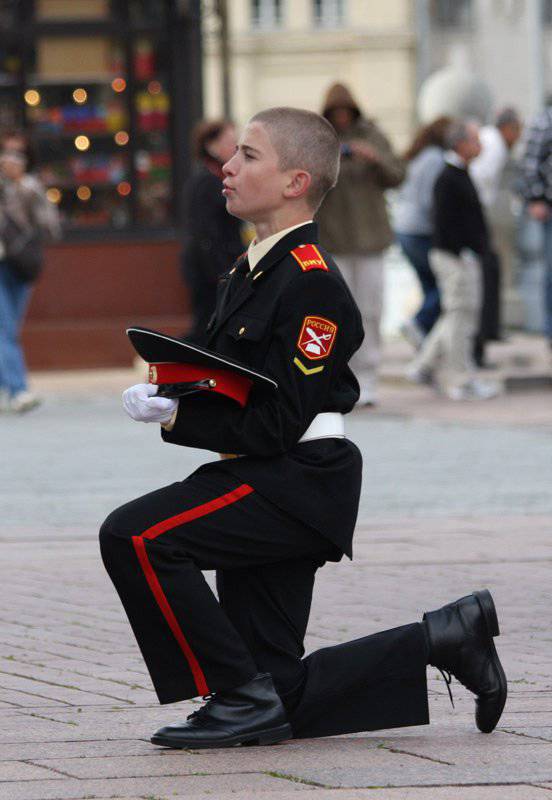 14 - September 15 The 2013 of the year in Voronezh will be the solemn celebration of the 70 anniversary of the founding of the Suvorov and Nakhimov schools. All graduates of these schools are invited, regardless of their place of residence and year of graduation.