Russia - without chemical weapons. Our country has destroyed about 76 percent of all declared reserves of toxic substances 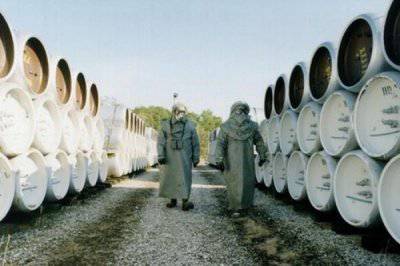 A statement that the Russian Federation destroyed more than 30 thousand tons of toxic substances - this is 76 percent - recently made by the Minister of Industry and Trade Denis Manturov. It is the ministry headed by him that provides finance and determines the implementation of work on the safe storage of chemical stocks. weapons.

The International Convention on the Prohibition of Chemical Weapons entered into force in 1997, it was signed by 188 countries, including Russia and the United States. Over the past decade, a new industry has been created in Russia to destroy chemical munitions. A fundamental decision was made: to build factories for the elimination of bombs and shells directly next to the arsenals in order to exclude the transit of deadly cargo through the country’s territory. After all, destroying chemical weapons is much more difficult than producing them, and fatigue accumulates in ammunition, fraught with an unexpected release.

In the same Mining, mustard was stored in rail tank cars removed from the wheels, and ultrasound diagnostics showed that the walls of the tanks were gradually becoming thinner. We had time, the arsenal is empty.

In 2006, a facility was commissioned in the village of Maradykovskiy, Kirov Region, where more than 91 percent of stored chemical warfare agents have been destroyed by now. In 2008, the Leonidovka facility in the Penza Region, which already eliminated more than 96 percent of the local arsenal, began to destroy. In 2009, the Shchuchye facility was launched in the Kurgan Region - more than 71 percent of stocks were destroyed. The Pochep facility in the Bryansk region joined the practical implementation of the program in 2010, and by now more than half of the chemical weapons stocks have been destroyed there. The construction of the seventh object is being completed - in the village of Kizner of the Udmurt Republic, it is planned to be put into operation at the end of this year.

But the rehabilitation and subsequent environmental rehabilitation of places of former chemical weapons storage facilities will be implemented under a separate federal targeted program, “Eliminating Accumulated Environmental Damage”. Relevant activities are planned in Udmurtia, Chuvashia, Nizhny Novgorod, Penza and Saratov regions. In general, it is planned to allocate 2017 million rubles in 550,7 for the rehabilitation of the territories of the pre-conventional treatment of chemical weapons, in 2018 and 2019 for 500 million rubles. However, the Penza region already in the 2014 year should receive from the federal budget 15 millions to study the possible consequences of the influence of pre-event activity with chemical weapons, and in 2015 – 2016 years more for 30 million rubles.

After the completion of the destruction of chemical weapons and the elimination of the consequences of working with hazardous substances, the plants will be reoriented to produce civilian products. On the instructions of the President, an interdepartmental working group has been established, which is starting to explore possible options for the subsequent use of facilities. Time is enough: the final life of the facility is not the completion of the destruction of ammunition, but its decommissioning and liquidation of the consequences of hazardous chemical production, which is designed for another three to five years after the completion of the elimination of chemical weapons.

For example, the leaders of the Shchuchansky district regularly hold a “hot line” with the population. Previously, residents were most interested in the safety of the enterprise and its impact on the environment. Today, interests have shifted in a different direction: they ask what will happen to the enterprise after the complete destruction of chemical weapons, how the plant will be redeveloped. So far there is no concrete solution, but it is already known: in the future, the plant will produce peaceful innovative products. The administration guaranteed residents that there would not be mass layoffs at the plant, where more than a thousand people work, moreover, all jobs will remain. In the Kirov region have already decided: on the basis of the plant for the destruction of chemical munitions planned to create a pulp and paper mill. An enterprise in Gorniy may become one of the objects of the chemical industry.

Moscow’s fulfillment of the obligations of the provisions of the Chemical Weapons Convention causes a negative reaction from Washington.

The US is trying to blame Russia, in particular, for not having got rid of its stockpiles of chemical weapons to this day. Given that overseas extend their program for the destruction of such arsenals to 2023 year.

Moreover, recently there have been reports that this process in the United States has actually been suspended. In our country, the remaining stocks of these weapons - about 12 thousand tons - should be eliminated already in the 2015 year. Do we have to “slow down” or work according to plan? The question seems strange, since even the assumption of the use of chemical weapons looks unthinkable today.

Of course, the current, particularly keen interest in chemical warfare agents is caused by recent events in Syria. The rebels unfoundedly accused government forces of using chemical weapons - without giving any evidence. In turn, the authorities strongly emphasize that it was the “democratic opposition” forces that the authorities were using.

The overall picture in the field of ridding the world of OB arsenals does not look very rosy. First of all, eight countries did not join the international convention: Angola, Egypt, Israel, Democratic People’s Republic of Korea, Myanmar, Syrian Arab Republic, Somalia and South Sudan. It is believed that four of them may possess chemical weapons: Egypt, Syria, Israel and the DPRK, and these countries have no data on the possible reserves of agents, according to approximate forecasts, they are about 5 thousand tons. Is it a lot or a little?

For example, one kilogram of the combat substance “V-ex” is enough to kill two and a half million people.
And no one knows what types of chemical weapons can be stored in the arsenals of these states.

At the same time there is another "but." Experts do not exclude that in the future some states will be able to develop new types of ammunition. Those that are not subject to the convention, because it regulates specific types of chemical weapons and their properties, known on the day of its conclusion ...

Ctrl Enter
Noticed oshЫbku Highlight text and press. Ctrl + Enter
We are
Remove gas masks
23 comments
Information
Dear reader, to leave comments on the publication, you must to register.