August 26 2013
49
Five years ago, Russia recognized the independence of Abkhazia and South Ossetia. During this time, power has changed in Sukhum, Tskhinval and Tbilisi, and there have been changes in relations with the Russian Federation. The Kommersant correspondents OLGA KHALENOVA and LANA KARATASTAEVA found out whether the tension in the conflict zone has decreased today and what gave Russian recognition to Abkhazia and South Ossetia.

In Sukhum five years after the Russian recognition, there is much less talk about military threats from Tbilisi - the border with Georgia is guarded jointly by border guards of the Russian Federation and Abkhazia. "The key problem of the physical security of the Abkhaz people has been resolved," the Deputy Foreign Minister of Abkhazia Irakli Khintba told Kommersant. The leader of the public movement "Aarua" Daur Achugba also calls the Russian-Abkhaz treaty on the joint protection of the border with Georgia "a major achievement." And he considers not the security, but the financial interaction with Russia, to be the main topic of concern for the Abkhaz today.

Since 2010, the Russian Federation has been channeling funds to Abkhazia for the implementation of a comprehensive plan to promote the social and economic development of the republic. In two years, more than 16 billion rubles were allocated, and in 2012, the implementation of the plan should have been completed. However, in spring, the Accounts Chamber of the Russian Federation carried out an inspection and came to the conclusion: the plan was completed only by half. The Abkhazian opposition states: it is failed because of corruption.

15 August Abkhaz President Alexander Ankvab met with his Russian counterpart Vladimir Putin - in Abkhazia, they are convinced that it was about allocating funds to complete construction in Abkhazia. However, no money has yet been received in the republic, which creates a tense atmosphere there. “The budget has been exhausted, huge debts to the builders, debts to state employees appeared, all because the construction was inefficient,” said United Abkhazia’s opposition member Nadir Bitiev. “Schools and kindergartens are beautiful, but they are very expensive for Abkhazia. No wonder the money ran out quickly. " 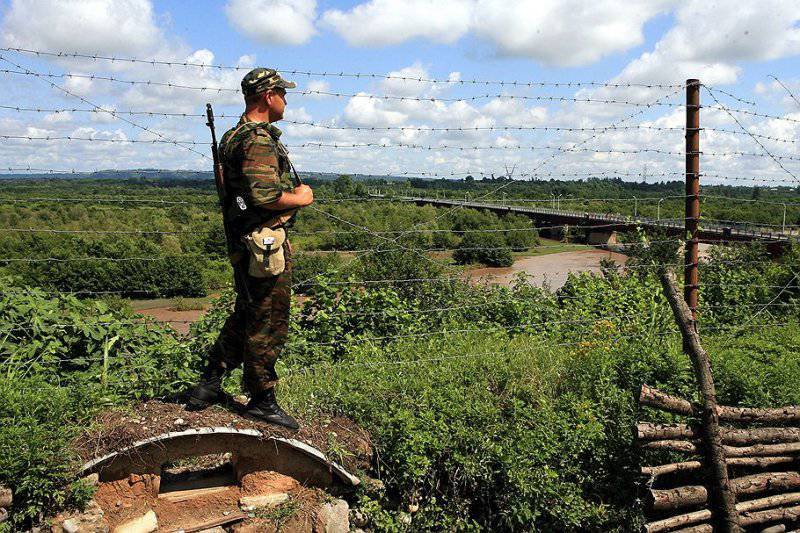 The main achievement of the last five years, the Abkhaz believe that the border with Georgia is now guarded by Russian border guards.

The lack of funding from Moscow put the Abkhaz authorities in a difficult situation and exacerbated the internal political contradictions that were laid down in the 2011 presidential elections of the year. Then the former power official Alexander Ankvab came to power, although there were rumors that Moscow would prefer to see Foreign Minister Sergei Shamba in this post. However, the Kremlin did not intervene in the election.

The fact that relations between Moscow and Sukhum were tense started talking in May when Russian Defense Minister Sergei Shoigu visited Abkhazia, but did not meet with its leadership. This could be explained by the situation with the military sanatoriums in Sukhum - last year the Ministry of Defense of the Russian Federation was forced to abandon them because of a conflict with the authorities of Abkhazia. But the Abkhaz opposition made its findings, announcing a cooling between Moscow and Sukhum. In June, the pro-government United Abkhazia went into opposition, depriving the executive branch of party support. The political council of the party called the actions of the current leadership of the republic "threatening national security", and foreign policy - "inert and ineffective." “Since 2011, no state has recognized us,” complains Nadir Bitiev. “The authorities have ceased to pay attention to the image of Abkhazia, they are only engaged in construction. In relations with the Russian Federation, there has been a marked cooling. Financing has stopped.”

In July, four opposition parties and five public organizations united in the Coordinating Council of the Opposition (CSR). On August 16, at a rally in Gudauta, CSR adopted a programmatic statement in which it announced a crisis in the republic. In essence, the enslaving of the Abkhazian government puts enslaving dependence on the Russian budget. The opposition says it would not want a revolution. The authorities hint that the opposition has rallied for a coup and that its main goal is to force the republic’s leadership to leave. But they both admit that Abkhazia was in a serious political and economic crisis.

"We have a national depression"

There is no money in South Ossetia today either - Moscow did not transfer the promised tranche. Construction work, like in Abkhazia, is carried out in debt - at the expense of contractors. In Tskhinval much reminds of the war we have experienced - destroyed houses, streets, roads. Here, too, they talk about security as a key achievement of recent years. But they immediately make a reservation: for five years they got used to safety, but they are tired of devastation. 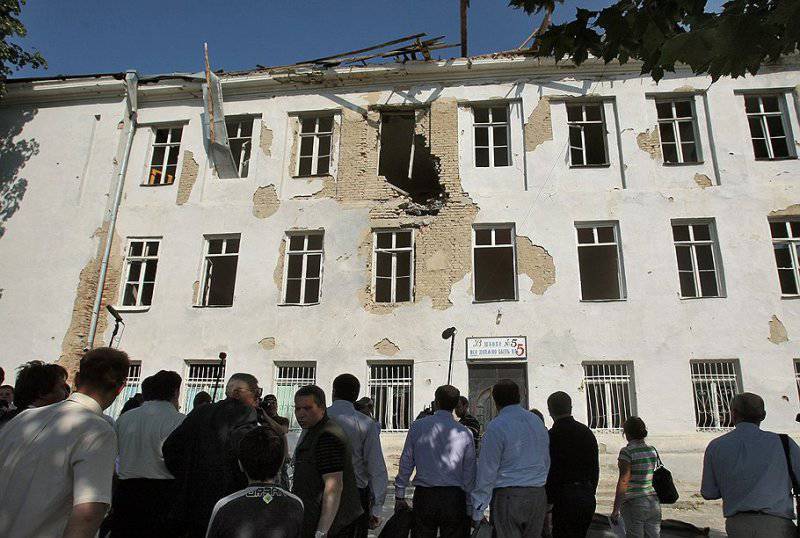 In Tskhinval much reminds of the war

“Today we have a national depression,” says Irina Gagloeva, head of the Ir media center. “People don’t believe in themselves or in leadership or external forces. There is no activity, the republic lives by inertia. We don’t actually have an economy. And this is another problem we are not developing a civil society. "

According to many experts and politicians, the lack of economic activity is associated with financial dependence on the Russian Federation - Moscow gives money for construction and rehabilitation, but stimulating the economy is not included in these plans. And South Ossetia has not yet learned how to make money on its own - many years of devastation and a dead-end geopolitical situation affect, when trade is possible only with the Russian Federation, which has not yet introduced incentives for the transport of goods for local entrepreneurs.

All this intensifies the split in society. “In the face of the threat from Georgia, the society was more united, and now, when security is guaranteed by the Russian Federation, the society is divided,” says the head of the parliamentary committee on youth policy, Sergei Zaseev. “A huge number of political parties contribute to this. Their programs are similar. People they just use parties as a means to get into power. " Parliamentary elections in South Ossetia will be held in 2014, but already today 15 parties are registered in the republic.

Since the beginning of summer, a difficult situation has developed on the border with Georgia - from South Ossetia, it has been demarcated: border guards install border posts, and according to the Georgian side, barbed wire. “The separation takes place in the settlements in which Georgians live,” complains Paata Zakareishvili, Georgia’s reintegration minister. “After installing barbed-wire poles, residents of one village often find themselves on both sides of the so-called border.” According to Mr. Zakareishvili, the Russian side is building border fortifications to prevent the "inevitable integration of South Ossetia and Georgia." 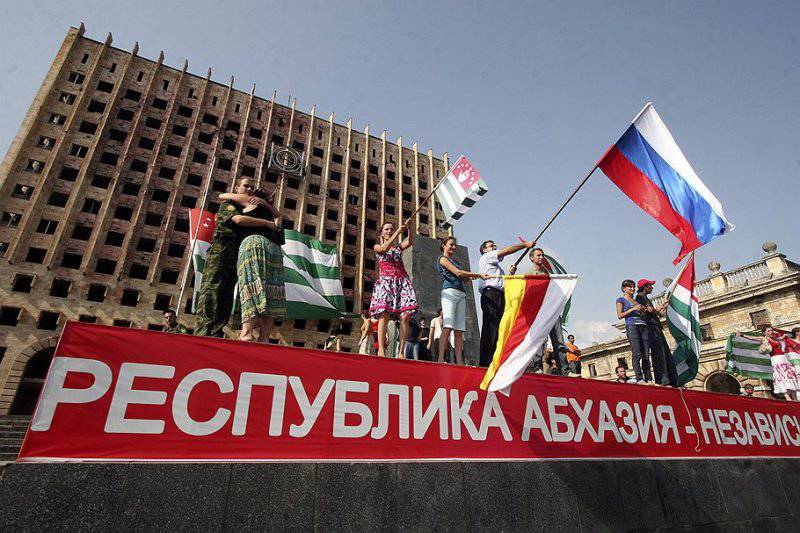 On the day of recognition of the Russian Federation of Abkhazia and South Ossetia 26 August 2008, the residents of these republics had high expectations

“We have repeatedly appealed to the Georgian side in order to create a commission for the delimitation and demarcation of the border, but the Georgian authorities do not react to our appeals,” says Foreign Minister of South Ossetia, David Sanakoev, saying to Kommersant. “We don’t go beyond a meter the border with Georgia. The Russian border guards do not make any unauthorized transfers. We have no information that the border is divided by some Georgian villages. Barbed wire passes through the territory of our republic. "

“The actions of the Russian Federation in the Tskhinvali region are incomprehensible for us,” Georgian Defense Minister Irakli Alasania said in his turn to Kommersant. “But we understand that reacting by force means further complicating the situation. This policy damages Russia's image, and Georgia gives us the opportunity to show once again that we are politically ripe. "

In Georgia, where, five years after the war, they are still convinced that Russia planned it, and Mikhail Saakashvili "succumbed to provocation," nevertheless they believe that now with the change of power (President Saakashvili leaves his post in October) , Tbilisi will have a chance to negotiate with the Abkhaz and Ossetians. However, Foreign Minister of South Ossetia David Sanakoev and Deputy Foreign Minister of Abkhazia Irakli Khintba assured “Kommersant”: the chances of normal relations with Georgia can appear only after Tbilisi recognizes the independence of these republics (see the details in the new issue of Vlast magazine).

Ctrl Enter
Noticed oshЫbku Highlight text and press. Ctrl + Enter
We are
Nikolay Silaev, Andrei Sushentsov: Georgia after the elections and prospects for Russian-Georgian relationsAlexander Roslyakov. Abkhazia: from love to hate
49 comments
Information
Dear reader, to leave comments on the publication, you must to register.