CAR: the concept of a "failed state" as a cover for international crime 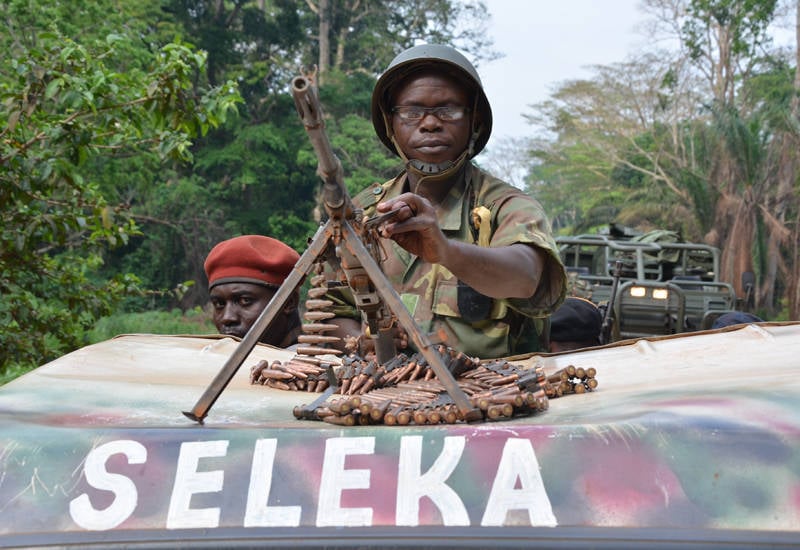 The situation after the coup d'état in the Central African Republic (CAR), which occurred at the end of March of this year, continues to develop in the most tragic way. From the very beginning it was clear that the coup was the result of the active intervention of external forces. (1) Now his goals and perspectives are becoming clearer.


On the one hand, attempts to legitimize a military coup began, on the other, attempts are being made to restore state power. In mid-July, the Transitional Charter was promulgated, according to which the formation of government bodies of the Central African Republic for a transitional period, stipulated for a period of one and a half to two years, begins. However, the new authorities are preparing for the elections, they say mass destruction of archives and civil registration, which makes it impossible to compile voter lists in the foreseeable future. (2) To a certain extent, this can be compared with what happened in Western Sahara, when mass resettlement of people from Morocco (supposedly Western Saharan) blocked the process of identifying those eligible to vote in the independence referendum, which is planned for several decades. 16 August was sworn in by members of the CAR Transitional Constitutional Court, which in turn 18 August swore in as president of the country leader of the military coup Michel Jotodia.

All this is happening against the background of a complete and comprehensive catastrophe of statehood. According to the Special Representative of the UN Secretary-General for the CAR Gen. B. Gaya, the impact of the crisis affected the entire population of the country with a population of 4,6 million people. Of these, 1,6 million are in dire need of food and water. More than 200 thousands of people became internally displaced persons and about 60 thousands fled outside the country. Children cannot attend schools, as they are either destroyed or occupied by armed units. (3)

The fact that the Central African Republic "has not yet become, but may soon become" a failed state has already been said in the UN Security Council. (4) If the central government still exists (albeit in the hands of insurgents who illegally seized it), then the state has been completely destroyed on the ground: there is no police, no prosecutor’s office, no courts. Destroyed industry and agriculture. It is already clear that next year there will be no harvest and famine will come (the peasants were able to sow only a small part of the seed). Thus, the continuation of a humanitarian catastrophe and the need for intervention by the “international community” are provided practically and informationally.

Among the important reasons for what is happening in the CAR, another aspect is ignored - the religious one. The Seleka group that took power in the Central African Republic was raised in the north of the country, where almost the entire Muslim population (adjacent to predominantly Muslim Chad) lives. Despite the fact that Muslims constitute only 15% among the population of the CARs, they constitute the majority in the composition of the “Séléka”. Chad’s active participation in the March coup in the CARs is no accident.

All this suggests that the creation of a “failed state” in the CARs is not an accidental consequence of the recent coup d’état, but one of its goals. The situation is similar to some forms of gastric ulcers: with surgical stitching, the ulcer immediately opens in another place. When Islamists were forced out of Algeria in 1990, they appeared in Mali. If al Qaeda was squeezed out of Mali, it should appear elsewhere.

In June, it became known about a letter written by the leader of the military junta to the Organization of Islamic Cooperation (5), which calls for assistance in creating an Islamic state in the CAR. Despite the fact that M. Jotodia himself refused to author this letter, everything is happening against the background of attacks on Christian churches and their plunder. (6) Al-Qaida is not limited to this, because the region is teeming with other terrorist organizations, both Islamist and other areas, including "Christian" sectarian organizations. These include, for example, the “Lord’s Resistance Army” under the direction of John Koni. (7) This organization was gradually ousted from Uganda, but today it finds refuge in the Central African Republic. Of course, it has nothing to do with the Lord, but it has to do with diamonds - it’s not by chance that the place of its new location is located in Upper Cotto, in the region of Central African diamonds.

Since 1 in August, the African Union’s peacekeeping mission, the International Mission of Support in the CAR, has begun its deployment in the CAR. This is the second attempt by African states to conduct a peacekeeping operation under African command. The AU Mission included three and a half thousand troops. The mission’s mission is to protect civilians and restore security and public order; stabilization of the country and the restoration of central government; reform and reorganization of the defense and security sectors; and, finally, creating an enabling environment for the provision of humanitarian assistance to populations in need. (8) However, according to the UN Charter, now the African Union must receive the approval of its mission by the UN Security Council. The last meeting of the Security Council on the CAR ended with the announcement of the transfer of members of the Council to the adjacent premises for “informal consultations”. At the same time, it is impossible not to draw attention to the statement of I. Shimonovich, Assistant Secretary-General of the United Nations for Human Rights, who stated the need to deploy "international forces with a strong mandate." He stated that the mission of the African Union is good, but “much more” is needed. (9)

However, there is no unity in the African Union with respect to the new authorities in the CAR. For example, despite the fact that the union imposed sanctions and a travel ban on the leaders of the military junta, M. Jotodia has already been accepted in a number of states (Burkina Faso, Benin, Gabon, Sudan, Chad, Equatorial Guinea). In addition, the junta leader was invited to the summit of the heads of states of the Central African Economic and Monetary Community.

Against the background of mass crimes against the civilian population, a statement was made by the chief prosecutor of the International Criminal Court, in which she stated that there are grounds to believe that international crimes occur in the CAR, primarily murder, rape and recruitment of child soldiers. (This should take into account the specificity of the population structure in the countries of Tropical Africa in general and the Central African Republic in particular: children, moreover, under the age of 14 years old, make up half of the country's population). (10) However, it is surprising that the prosecutor of the ICC has called on the international community to help the CAR government in providing security. It turns out that the prosecutor of the ICC is not aware of the fact that it is those who call themselves now the “government” and commit crimes that she allegedly investigates. From this it can be expected that they are preparing to accuse of committing these crimes not to “Seleka” and its leaders, but to someone else. There are many options, including South African authorities, whose soldiers were in the CAR at the request of the ousted government led by F. Bozizé and who allegedly killed several civilians. Or (more likely), those who try to resist the complete destruction of the country or the creation of an Islamic state can be accused of committing crimes ...

Proving the jurisdiction of the ICC requires proof of the “inability or inability” of local authorities to investigate these crimes and punish those responsible. This situation in the UN Security Council is already hinted. The fact is that in May the new authorities of the CAR established a national joint commission to investigate human rights violations and crimes committed since 2004. However, according to the estimates of the UN leadership, this investigation does not meet the standards of independence and impartiality; therefore, an international investigation commission is needed.

It is impossible not to notice that the ongoing investigation of the situation in the Central African Republic by the Prosecutor’s Office of the International Criminal Court is taking place against the background of the recently resumed trial of Jean-Pierre Bemba, the former Vice-President of the Democratic Republic of Congo, who is being tried for crimes allegedly committed then-president of the Central African Republic A.-F.Patasse. New defense witnesses testify that the crimes accused by Bemba were actually committed by the rebels of General Bozizé (the one who, despite the help of Bemba, overthrew Patassa, but who in turn was overthrown by the current rebels who captured the capital in March this year).

Recently, the concept of a “failed state” has received a new development, but in general it has been adopted as a new form of external governance in Africa. Somalia, Democratic Republic of Congo, Guinea-Bissau, Mali, now the Central African Republic - all these are examples of the creation of political offshores to accommodate international criminal, including terrorist, organizations. The coup in the CAR occurred almost immediately after the completion of the main al-Qaida sweep operation in Mali. From now on, the elimination of one of the political offshores will inevitably lead to the creation of a new one.

Ctrl Enter
Noticed oshЫbku Highlight text and press. Ctrl + Enter
We are
About Stalin and KhrushchevMilitary reform as an integral part of the security concept of the Russian Federation: Systematic dynamic assessment
Military Reviewin Yandex News
Military Reviewin Google News
4 comments
Information
Dear reader, to leave comments on the publication, you must sign in.