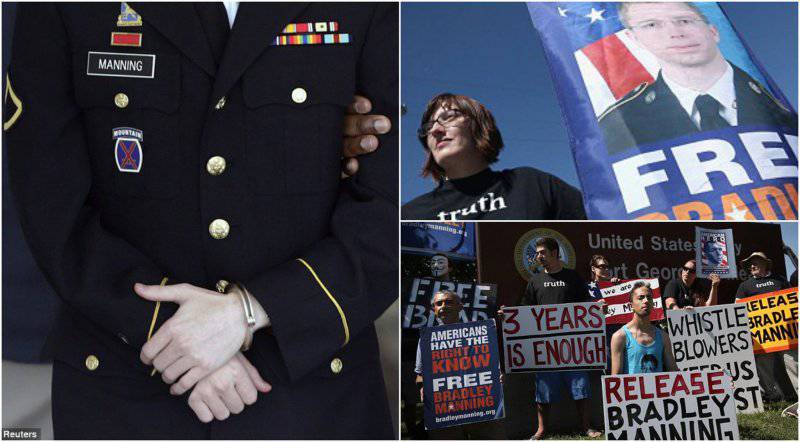 A US court showed double standards in relation to the rule of law and human rights, sentencing the main informant of WikiLeaks Bradley Manning to 35 years of imprisonment. Thus, Konstantin Dolgov, an authorized representative of the Russian Ministry of Foreign Affairs for Human Rights, Democracy and the Rule of Law, commented on the outcome of the scandalous legal process:


"If we leave out the very serious charges against the ordinary US Army B.Manning and the degree of his real guilt towards the US state (this is the prerogative of the US court), the following is noteworthy. According to many reports, including American human rights organizations, information released by B. Manning revealed numerous abuses by the US Army during operations in Iraq and Afghanistan, including the death of civilians and civilians, torture as well as other gross violations of international human rights law. In short, everything that the US authorities are so baked and so enthusiastically seeking to promote around the world. As far as we know, despite the vigorous demands of international rights control mechanisms rights, in particular, the special procedures of the UN Human Rights Council, as well as the human rights community, no one in the United States has incurred any punishment for these offenses.

In addition, from the mouths of US officials, one can often hear criticism of various court decisions taken in other countries for alleged infringement of freedom of speech, assembly, and other civil rights. However, when the interests of the United States themselves are affected, the American judicial system, as in the case of B. Manning, makes unreasonably tough decisions on the principle of “others not being discouraged” without any regard for human rights aspects.

Such a manifestation of double standards in relation to the rule of law and human rights once again shows the unfoundedness of the claims of the United States for "leadership" in these important areas ", - noted in the comment of K. Dolgov.

21 August Court sentenced 25-year-old US Army soldier Bradley Manning to 35 years in prison. The preliminary hearings on the Manning case began in 2012, and the process has been going on since June 2013. During the trial, Manning acknowledged the transfer of secret documents to Wikileaks, stating that in this way he wanted to tell the world about the disdainful attitude of the US military to the lives of civilians in a conflict zone.

In particular, the resource WikiLeaks has published documents of the US Department of Defense, which set out the rules for the treatment of prisoners in Iraq, as well as those suspected of terrorism in a special prison at the American base in Guantanamo (Cuba).

WikiLeaks talks about how evidence is obtained from prisoners in prisons using emotional pressure and intimidation. So the investigators are asked to “play” on the prisoner's love for his family and homeland, or, on the contrary, shout at him and throw threats, so that the only way out seems to be cooperation.

The “Prisoners' Contents” document shows the anatomy of the beast, which is the US prison system created after 9 / 11. This is a piece from that dark zone where law and rights do not apply, where a person can sit without any trace, which is very convenient for the US Department of Defense. It shows the costs of the early days of the war with an unknown "enemy" and how these methods matured and evolved. In the end, it all developed into a permanent system of exceptions that exists today, "said Wikileaks founder Julian Assange.