August 23 2013
50
Last Tuesday a working meeting of the Russian-Chinese commission on the preparation of regular meetings of heads of government was held in Harbin. The Russian delegation, headed by Deputy Prime Minister D. Rogozin, included representatives of several ministries. From the Chinese side, government officials also attended the meeting, and Vice Premier Wang Yang headed the Chinese delegation. During the meeting, some issues of international cooperation in the economic and industrial fields were discussed. 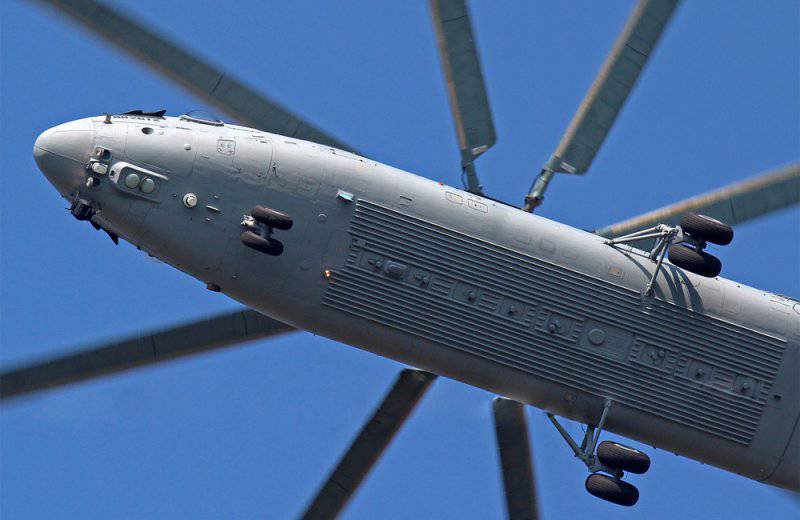 After the meeting was over, Russian Deputy Prime Minister D. Rogozin read out some interesting facts. According to him, China is actively interested in Russian developments in the field of heavy helicopter and asks for some information. At the same time, the requested data is significantly different from the characteristics of the largest in Russia and the world transport helicopter Mi-26. From this fact, Rogozin draws the appropriate conclusions. According to a senior official, in this case we are talking about the creation of a new super-heavy transport helicopter. The capacity of this helicopter, according to the deputy prime minister, should be about twice as large as the Mi-26.

Rogozin believes that such a promising project has a great future and does not agree with the opinion that there is no demand for such equipment in the modern aviation market. Currently, there is only a discussion of the very possibility of a joint project. However, Chinese aircraft manufacturers, according to the Deputy Prime Minister, are ready to begin the first consultations in the framework of a joint project. Thus, in the near future, the signing of relevant agreements and the start of a project to create a super-heavy transport helicopter can be announced.

For obvious reasons, very little is currently known about this possible project. Firstly, there is still no exact data on whether such a project will be launched or not, and secondly, the technical appearance of the future helicopter now looks extremely vague. In fact, in addition to the approximate capacity, nothing is known. Therefore, in discussions news most often considered the need for such technology. Indeed, the creation of such a helicopter with a record-carrying capacity is too difficult to take on it, without sufficient reason.

In the context of a possible joint project of a super-heavy helicopter, it is worth recalling the Soviet project B-12, also known as Mi-12. Helicopter В-12, created in the design bureau ML. Mile made its first flight 45 years ago - in July 1968. During the tests, the unique twin-screw cross-circuit machine set several capacity records. The maximum load that the first of the B-12 prototypes could lift was equal to 44205 kilograms. This record set by 6 August 1969 of the year has not been beaten by anyone yet. However, despite the unique capabilities, the B-12 helicopter remained at the testing stage. Both prototypes currently serve as museum exhibits; one of them stands on the territory of the Moscow ML helicopter plant. Mile, the other - in the Air Force Museum in Monino. 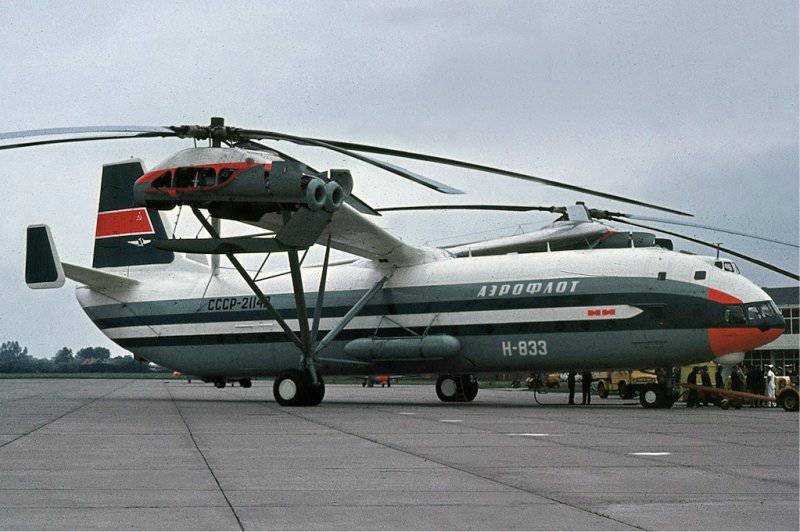 Now, while discussing the prospects for a possible Russian-Chinese project, the B-12 helicopter is interesting for two reasons. The first is the fundamental possibility of creating a workable and serviceable helicopter with a payload of more than 40 tons, i.e. twice as much as Mi-26, as Rogozin mentioned. The second reason for interest in B-12 lies in his sad fate. This helicopter was created for the transportation of various large cargoes for military purposes, including ballistic missiles. It was supposed to use it in conjunction with heavy military transport aircraft An-22 "Antey". In this case, the plane was supposed to deliver cargo to the nearest airfield, where an overload took place on B-12 helicopters. The latter were supposed to deliver the equipment to the specified areas. However, by the end of the development and testing of B-12, it became clear that the rocket forces no longer needed such complex logistic schemes, and other transport tasks of the armed forces could be solved with the help of cheaper and more massive Mi-6 and Mi-8 helicopters. As a result, the record B-12 was out of work.

Of course, a helicopter similar to the B-12, at the present time could be of interest not only to the military, but also to various commercial structures. Having a tonnage of 40 tons and good for its size flight characteristics, this machine is able to perform various tasks for the delivery of cargo, beyond the power of other helicopters. At the same time, such a rotorcraft will have to fight for a place in the sun. Despite the interesting and unique characteristics, such a helicopter is unlikely to be able to immediately fit into the existing system of transportation.

The development of helicopter during the previous decades has identified a niche of this class of technology. The overwhelming majority of rotor-wing machines produced have a payload of no more than 3-5 tons, which speaks quite clearly about the needs of potential customers. In other transport sectors, where a large mass of goods is involved, other vehicles are usually used, from airplanes to automobiles.

You can also recall the commercial success of the largest at the moment serial helicopter Mi-26. Since the early eighties, more than three hundred such machines have been built, but most of them are being used in Russia and in the post-Soviet space. Orders from third countries also take place, but they almost always imply the delivery of read units of equipment. This fact can also be considered confirmation of the needs of the market.

As a result, a controversial situation has already developed around the not yet developed helicopter. High performance should attract the attention of potential customers. The ability to transport cargo weighing about 40 tons in combination with purely helicopter take-off and landing characteristics is a more than interesting offer. The flip side of the coin are vague real prospects. With all its advantages, such a helicopter is unlikely to be needed by a large number of customers, which will correspondingly affect the number of machines built and, as a result, the cost of the project.

The hypothetical super-heavy helicopter, as well as its predecessor B-12, is already locked up in a narrow and specific niche at the very first discussion stage. In the current situation, the next option for the development of the project looks most convenient and convenient. It is necessary to carry out work on the preliminary study of the appearance of a promising helicopter, and then analyze the project and decide whether it can fit into the existing logistics systems, primarily in the armed forces. If a superheavy helicopter finds a place and work in the structure of the domestic air force, then the project should be continued. If such a machine risks being unclaimed, then our country should minimize its participation in the project, without wasting time, money and money on the creation of obviously unnecessary equipment. It is likely that in case of successful completion of negotiations and the start of a joint project, China will go the same way and will also try to determine whether it needs a similar helicopter with high performance and an ambiguous future. As for supplies to third countries, one should take into account the obviously low prospects in this regard and focus primarily on their own needs.

However, considering the prospects of a hypothetical Russian-Chinese super-heavy helicopter, we should not forget one more thing connected with the military-technical cooperation of Russia and China. For several years now there has been talk of the creation by the two countries of a joint project of a wide-body long-haul airliner. It is noteworthy that after the international working meeting on Tuesday, D. Rogozin spoke about this project. Nevertheless, despite the long-standing appearance of this idea and the statements of officials of the highest level, to this day the project is at the stage of the earliest discussions and consultations. No one can guarantee that a joint project of a super-heavy helicopter will not repeat the fate of the expected, but in no way begun, development of a long-haul airliner. Thus, all discussions on the prospects of a new rotorcraft are limited by the intentions of the parties. Moreover, due to the lack of real plans, all such discussions may become completely useless.

What will be a promising super heavy transport helicopter and whether it will be at all, while it is too early to say. So far, there are consultations on the possibility of starting a joint project and the details have not yet been determined. Perhaps the common features of a promising machine will be known in the very near future. However, it is not surprising if the hypothetical project will remain at the stage of conversations and discussions. At the moment there are a sufficient number of arguments for him and against him. Therefore, the officials of Russia and China can make any decision, and the interested public can only wait for the relevant statements and news.