Trend news: everything is bad again in Russia ... 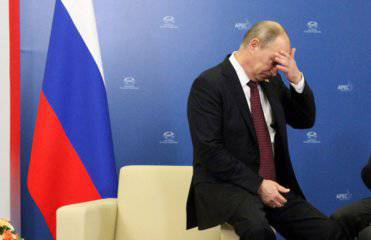 The information space of our country has undergone a strange metamorphosis. If in Soviet times news programs on TV, radio and major print media cheerfully reported on the achievements of the livestock industry, space exploration and the friendship of peoples, forcing viewers (listeners, readers) to catch themselves thinking that “they are not telling us something,” today everything looks like a wrong side up. Negatively colored materials literally occupied numerous media so that every day we hear about how poorly Russian gays and lesbians live, how “evil” Assad poisons his citizens with chemical weaponshow Russian athletes will fail at the Sochi Olympics, and how much money Berezovsky, Polonsky and Borodin stole from their compatriots, as our army is weak compared to the Chinese or American. The movement towards the golden mean — the coverage of events of a different nature and from different angles — is still by many media either consciously ignored or confused in some thorns that appear in the way.


Turning on almost any news release today we can draw something like the following conclusion: the whole of Russia will soon be completely flooded, and the part that big water does not touch will absorb the fires, but this will happen only after all crops are eaten by locusts, all fruits and vegetables - moth, all forests will be put under the root of “black” lumberjacks, selling wood to China or Finland, and after Churov arranges a global ballot box stuffing in the next election ... As the saying goes: “Where are you, brothers? ..”

But in recent years, a whole social stratum has emerged, which the thought that “you must certainly run somewhere” exaggerates with terrible force and without this thought, fueled by negative information, cannot literally live. A big oddity is that representatives of this stratum are trying to obstruct any positive attitude concerning Russian reality. Someone will immediately say: wow! we in Russia also have a positive! Come on!

Offhand - a few real-life news and possible comments on them from people who are trying to find an indispensable negative in any information:

Competition for service in the first Russian "scientific" company is 3 person in place.

Of course ... competition! After all, the children of officials want to get a military ID, sitting at the computers, and that's the 3 person for one bed ... Next will be even more ...

Yeah, they took ... And what else do they have to do, no matter how they program. They do not read books, they all play shooters - that’s what they won. You have to do business, business!

Archival documents will appear in Russia in the public domain.

Wait, wait ... In the open, schazzzz. This is who we will open documents about the Ukrainian Gladomor or the shooting of the Poles in Katyn ... Putin will definitely not go for it.

In Russia, scientists have created effective camouflage radar absorbing coatings that can be used in aviation and navy.

Yes, what they "created" there. The Americans, I suppose, was stolen, and Snowden with Assange and Manning helped. Our hands are not growing from that place.

In general, the list of examples can be continued further, but I think the general meaning is clear. Moreover, in the first place, the tendency is clear that if the media offers negative information about today's life in the country, then it goes, as they say, with a bang. At the same time, no one is going to analyze the messages, check the sources, verify with other media. But as soon as the positive news passes through the press, the Internet or on the television screen, they simply clutch their teeth. Moreover, those who cling to anything can not come to terms with the situation, that there can be a positive in Russia.

No one in this case calls for the Russian media to go down to only “marmalade-chocolate” publications. Not at all. Just the situation when the negative is replicated faster and more massively than insects breed, and even without trying to check the objectivity of information, raises certain questions.

Asking one of these questions - the question of where, from some representatives of modern society, is such a pathological passion for information with a clear negative connotation, you come to the conclusion that people just fell into the trend. This trend began to form immediately after the collapse of the USSR. The country that was plunged into chaos and forced to rejoice in worn jeans and the appearance of a “restaurant” of fast food somehow forgotten how to believe in themselves. People who continued to practice such faith became, if not social outcasts, then some kind of holy fools in the representation of other people. Believing in yourself has become somehow unfashionable. Another thing is to believe in an overseas uncle, who will come and bestow a trench on everyone so that the wind of change will not finally tear us away from the soil under our feet. And since the belief in “uncle” extended to all the new representatives of Russian society, then the first successes of the new country were perceived as something semi-fantastic and, on the whole, incredible. “There can be no success in this country”, - this is how we were taught by clever people from TV screens, showing pictures of how “real people” live there. A substantial percentage of the Russian population continues to believe today that “there” is everything, and here it is nothing, and if there is “something”, then nothing but fairy tales of the authorities. This leads to the fact that a certain circle of mass media needs to support the designated idea and cultivate new and new adherents of Russian negativism. After all, it is not only fashionable, but also profitable. And the profit for the consumer society that we have been transformed into (or we have transformed ourselves) is in the first place.

Altering the well-known proverb, one could say this: today on the Internet about the positive news in Russia is either bad or nothing ... But the Russian Internet is many-sided, and therefore, by the same voice, thank God, it does not work. The alarmist media faced the emergence of a self-opposition, which makes it clear, including through its own audience, that the hackneyed record “is all gone! life is shit! ”the tracks are pretty much stuck, and the emerging hissing and distortion are interesting to an ever smaller population.

Ctrl Enter
Noticed oshЫbku Highlight text and press. Ctrl + Enter
We are
Russian army and special services are preparing for the Sochi OlympicsBashar al-Assad: In Syria, not the “revolution” that the enemies are talking about, but the revolution of the army and the people against terrorists
Military Reviewin Yandex News
Military Reviewin Google News
202 comments
Information
Dear reader, to leave comments on the publication, you must to register.