Agents in cassocks and cassocks As secret services did not save Metropolitan Kirill, and the Vatican, priest Lazarus

August 23 2013
12
This summer there were two mysterious storiesassociated with the priests. In the suburbs of Varna, the body of Metropolitan Kirill of Varna and Great Preslav was found. He was found on the morning of July 9 in the sea near the beach in the area of ​​Trakata. It turned out that his death was not accidental - Metropolitan Cyril was drowned. And on July 27 it became known that the State Security Committee of Belarus had arrested the priest Vladislav Lazar. Both were suspected of espionage.


For whom, besides God, could agents work in a cassock and a robe? How is intelligence and religion compatible? The “AN” columnist asked these questions to be answered by veteran of the Soviet and Russian special services retired colonel Valery Ivanovich SEDYH.

The mystery of the death of the Metropolitan

In August, no one will be surprised by the sea tan. But Valery Ivanovich was so black as if he was born in Africa and lived there all his life.
“The signs are also on the face,” the “AN” columnist could not resist the jokes of an old acquaintance. - Where so much rest?

A white-haired man flashed white teeth on his dark face and broke into a smile:

- Almost two months was on the Black Sea, near Varna, with friends.

I know that envy is one of the worst feelings, but I could not resist:

- Great settled in retirement! To the fullest use the status of an honorary citizen of the Bulgarian resort town. How good to maintain friendship with bratushkami ...

And here Valery Ivanovich suddenly became gloomy. And he began to tell that not everything is so smooth now with the Bulgarian-Russian friendship. Many want to poison our historically good relationship. In recent years, the espionage campaign has been aggressively swelling.

Now in Varna only talk about the death of the local Metropolitan. First, a version was put forward that the priest drowned while catching mussels - they found a mask and breathing tube with him. Now it turned out that Metropolitan of Varna and Velikopreslavsky was drowned. Experts came to this conclusion after examining the autopsy results. Bulgarian special services are still unsuccessfully looking for criminals. Who benefits from the death of Russia's best friend? That is how Patriarch of Moscow and All Russia Kirill described his namesake in his condolences.

The Bulgarian Metropolitan Kirill (in the world - Bogomil Petrov Kovachev) headed the Varna Metropolis since 1989. In November 2012, he was elected Patriarch of Locum tenens and held this position until the election of Patriarch Neophyte in February 2013. At the time of his death he was 59 years old.
According to Colonel Sedykh, an unprecedented campaign of harassment has recently been launched against Metropolitan Kirill. Wanting to prevent his election to the Bulgarian patriarchal throne, the liberal pro-Western press called him James Bond in a cassock. He was accused of working for the Soviet and Bulgarian security services. 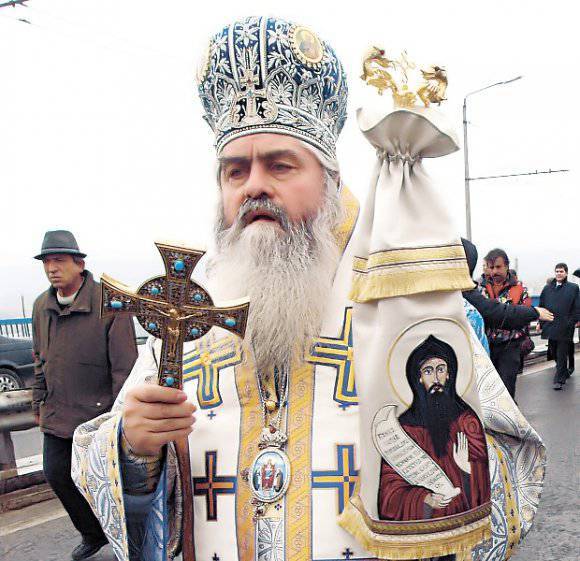 The scandal began on 17 on January 2012 of the year. Then the state commission for the disclosure of citizens' belonging to work for the state security and army intelligence services of Bulgaria in the communist period revealed that Metropolitan Kirill from June 29 1976 as a secret officer and agent Kovachev (from June 1 June 1986 as Vladislav), who collaborated with KGB of the USSR, GRU of the General Staff of the Armed Forces of the Soviet Union and the VI-III Bulgarian Intelligence Directorate. Metropolitan Kirill himself has always rejected rumors about his cooperation with the special services, declaring: "I have always been an Orthodox Christian, a patriot and a fan of the football club CSKA."

“CSKA is not from Moscow, but from Sofia,” said Valery Ivanovich.

Colonel Sedykh worked for a long time along the so-called church line. Therefore, in our conversation, he did not hide his surprise at the position of the current Russian Federal Law “On Foreign Intelligence”, which prohibits the work of special services “under the roof” of religious organizations and recruiting agents among clergymen.

- Remember how in the famous film “Seventeen Moments of Spring” Stirlitz used Pastor Schlag as a liaison in Switzerland? - He asked a rhetorical question. “And now the Western special services and the Vatican are using clergy for espionage. Take, for example, the growing scandal over the arrest of a Catholic priest in Belarus.

From the local press reports, it became known that this summer the priest Vladislav Lazar, who is the head of the parish of the Descent of the Holy Spirit in Borisov, was arrested. The KGB of Belarus incriminates him work in the Western special services. According to preliminary data, the priest is currently in the KGB jail. 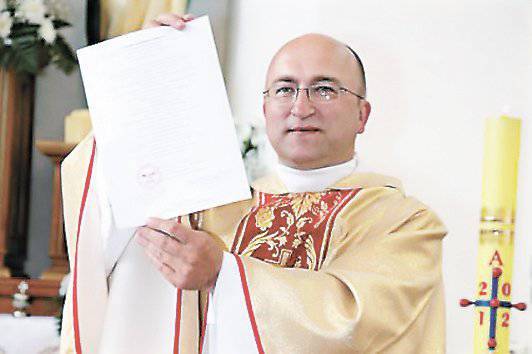 President of Belarus Alexander Lukashenko 26 July during a visit to the construction of an aquapark in Minsk spoke about some kind of spy scandal: “We recently detained one of the traitors who served in special services and who was through representatives of the Catholic Church connected with foreign countries and not only handed over the information, but and because of his activities, people who work abroad have suffered. ”

Colonel Sedykh commented on the words of the Belarusian leader:

- Old Lukashenko is very demanding of his KGB. But in this case, the Belarusian counterintelligence worked very well. The priest was taken red-handed. Therefore, all attempts by the Vatican diplomacy to save its man from prison are doomed to failure.

According to Valery Ivanovich, the priest himself is from Molodechno, graduated from the Grodno seminary, and later studied in Poland, where he was recruited by Western intelligence agencies. Earlier, the young seminarian performed the secret missions of the Vatican.

For the first time, Vladislav Lazar drew the attention of the Belarusian KGB when he began to look for acquaintances among the officers of the famous 5 Special Forces Brigade in Maryina Gorka. This top secret military unit is part of the special operations forces and is a tasty morsel for foreign spies. Then he began to play the role of a liaison, a sort of Belarusian “pastor Shlag”, with a “mole” traitor in intelligence of the Republic of Belarus. The church is a convenient turnout for spies.

Agents in cassocks, many underestimate. Like, which of the priest scout? Colonel Sedykh a different opinion. He believes that the experience of the exploration of the Vatican has no equal in the world. This is one of the best intelligence services in the world of espionage. And, perhaps, one of the most secret. The AN reviewer asked me to tell about it in more detail.

How many divisions does dad have?

Instead of an academic lecture at first, I heard from Valeriy Ivanovich a historical anecdote about how during World War II, Molotov told Stalin that it would be nice to include in the anti-Hitler coalition ... the Vatican. After all, he has huge connections among the hundreds of millions of Catholics living in all countries of the world. Iosif Vissarionovich sarcastically asked: “How many divisions does the Vatican have?”

To which Molotov allegedly replied: "Another intelligence officer in a robe is more dangerous than a hundred divisions."

And indeed it is. Although the Vatican does not have military power (several hundred Swiss guards guarding the pope, clearly does not count), but the influence in the world that has this dwarf enclave state is simply unique. And this is largely due to secret diplomacy and the Vatican intelligence. After all, it is no secret that from time to time Catholic authorities were sent out by the authorities of different countries for espionage.

After the war, a wave of arrests of high-ranking Catholics swept across Europe: Cardinal Mindscenti was arrested for intelligence activities in 1948 in Hungary, Bishop Schubert was sentenced to death in 1951 in Romania, and even sentenced to death in Bulgaria in 1952 in Bulgaria. So the recent arrest of the priest Lazarus is not an exceptional case.

According to Colonel Sedykh, the structure of the Vatican secret services has never been approved by any official documents. But it is clearly divided by goals and objectives. Strategic intelligence intelligence is the Order of the Jesuits. His people recruit agents of influence. The Jesuits control all the Vatican structural centers that collect intelligence information.

The Russian department of the Vatican intelligence service is covered with a “roof” in such structures as the “Congregation of Eastern Churches”, the “Catholic Stock”, “Russia Christian”, in the suburb of Milan Seriate and the Jesuit Institute of St. George in Medon. Russicum is responsible for human intelligence, where students from Western and Eastern European countries are taught the art of secretly penetrating secrets. The training of Catholic illegal immigrants is also carried out in the “Russian Catholic College named after Sts. Teresa. "

The functions of foreign counterintelligence in the Vatican are performed by the Order of Dominicans. The Vatican formation "Sodalicyum Pianium" is engaged in identifying heresy among priests, and also solves questions of political security and the physical protection of the Pope. Contacts with foreign intelligence services and the implementation of information and operational orders of the CIA, MI-6, BND, "Mossad" are carried out with the help of the Maltese Hospitaller Order. They say Gorbachev was awarded the highest award of the Maltese.

Thomas Morgan, the author of a book about the Vatican, aptly named by him “Post Eavesdropping”, writes: “Day and night flock to the Holy See, bad and good, from the most remote corners of the world ...” This information is carefully analyzed and based on it strategic decisions affecting the fate of the world.

Ctrl Enter
Noticed oshЫbku Highlight text and press. Ctrl + Enter
We are
About Stalin and KhrushchevWhat you didn't want to know about England
12 comments
Information
Dear reader, to leave comments on the publication, you must to register.