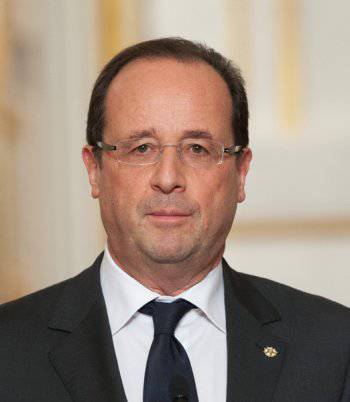 The fighting in Mali is no longer “hot.” news" in Paris. There is more discussion of the problem of gay marriage.


Created under the leadership of Charles de Gaulle, the institutions and ideals of the Fifth Republic of France were specifically designed to affirm its greatness. "France cannot be France without greatness," as the late general once famously declared. Greatness can only be achieved on the world stage. But in the view of de Gaulle, the audience for such a demonstration of greatness should consist solely of French citizens: greatness abroad, he believed, would unite the most implacable enemies in their homeland.

The gollist paradigm of local actions on a global scale has left a deep imprint on the strategies of subsequent French presidents. It doesn't matter what political views the French president had: he could be a conservative, liberal or socialist, but they were all gollists when it came to solving issues abroad. Some analysts even called it the “French exception in foreign affairs,” and this state of affairs often served as a source of irritation for the French allies. But such a policy formed the ideal to which the public of the country aspired, and on the basis of which all the political and intellectual classes of France rallied.

President Francois Hollande, who won last year’s elections, however, should have provided for something completely different in his policy. He built his election campaign primarily on domestic economic issues — the main mantra of his Socialist Party was “C'estl'économie, Pauvre Con!” (“This is economy, this is stupid!”). In his election speeches Hollande almost did not touch foreign affairs. But Hollande did not manage to get off the path of Gollism, and in January 2013, France undertook armed intervention in the internal conflict in its former colony, Mali. The defeat of radical Islamists, advancing from the greatest African desert on the capital of Mali, made Hollande, like his former mentor Francois Mitterrand, 100% a gollist. But now, three months after the first French troops arrived in Bamako, only occasional reports of the death of French soldiers or the bombings of the French embassy in Tripoli remind us of the events in Mali in the French press.

The speed of the decision of the French president to intervene in Mali surprised many representatives of the political and intellectual elite of the country. Prior to that, Hollande had the nickname “Flamby” (“custard”) and was not particularly determined. But Hollande’s decision to send troops to Mali consolidated French politicians, and even many of his opponents agreed that Hollande’s decision to deploy troops was a "lesser evil."

However, there were those who expressed doubts about the feasibility of such a decision. Most of the dissenters were in the extreme left part of the French political spectrum, in particular, in the Green Party. Opposition politician Jean-Luc Melenchon, for example, hinted that Hollande’s real goal was actually uranium deposits in neighboring Niger, while Green Leader Noel Mamer was convinced that “propaganda goals” were the real reasons for armed intervention. Even the bright gollist of Dominique de Villepin, who served as French Prime Minister in 2005-2007, warned that Hollande had little knowledge of the past and real geopolitical realities, reminding him of the conflict in Afghanistan.

The tight deadlines for Hollande’s decision to intervene in Mali have also attracted the attention of some French public figures. Philosopher Michel Onfrey, for example, argued that the president of a country was chasing Malian problems, while his own state was on the verge of bankruptcy and creditors were buying France piece by piece. In addition, his prime minister, Jean-Marc Ayreau, Hollande showed a kind of record in the fall of the 2012 rating in the fall. Encountered the economic crisis and rising unemployment - many of which, frankly, were the result of the work of former President Nicolas Sarkozy - Hollande helpless and miserable. One by one, he did not keep his campaign promises: from keeping the steel factory of the Mittal Corporation in the north of France afloat to softening the monetary and budgetary dictatorship of Berlin and Brussels. It is indicative that just two weeks after the operation began in Mali, almost 90 percent of the French said that "France needs a true leader to restore order."

A few months later, France is still desperately looking for a real leader. Gollist greatness abroad, it turns out, is not among the natural resources of Mali. A recent public opinion poll showed that foreign policy is the only area where Hollande’s actions are supported by at least 50 percent of the respondents. This is a rather weak support, but not as catastrophic as in the other categories. In fact, the results of the survey can really be called catastrophic: hardly a quarter of the French are satisfied with the work of Hollande. Never before has the French president fallen so quickly in the eyes of so many in such a short time.

Even the rapid defeat of the Islamist rebels in the north of Mali by France did not prevent Hollande from falling into hell of public disappointment. The question arises in the style of Zen: “If a military operation realizes its goals, but no one pays attention to it, is it successful?”

In general, the French military actions in Africa, for the French, are reminiscent of spring rain. Since 1958, and since the establishment of the Fifth Republic, the Gaullist, liberal, and socialist presidents sent soldiers and aircraft to Africa with an enviable regularity and frequency — about four dozen times. This constancy has largely accustomed the French public to foreign military conflicts.

In addition, the long-term prospects for the success of a military mission in Mali are completely incomprehensible. Judging by the narrowest criteria — deterring the offensive and scattering of the Islamist insurgents “Movement for unity and jihad in West Africa” and “Al Qaeda in the Islamic Maghreb countries” - the operation in Mali has already achieved victory. 4 thousands of French soldiers relying on troops from Chad, prevented the Islamist attack on Bamako. Moving further north, the French and Chadian contingent gained control of the stones and sand bordering Niger and Algeria, and liberated the cities of Timbuktu, Gao and Kidal.

But the French public thinks that this victory is nothing more than a castle in the sand. The French did not destroy the Islamist rebels, they simply drove them back into the wilderness, where they actually lived all their lives. Jihadists have just disappeared into countless ravines and caves in the region. Even the United Nations, in its recent report, warned that the reduction of the French military presence in the region "risks leading to the return of armed Islamist groups."

The lack of a clear military victory is in doubt also among the local population, which suggests that the African forces, to whom control over the territory is supposed to be transferred, have neither the capacity nor the conviction of the French. Recently, French Defense Minister Jean-Yves LeDriant, who was on an official visit to Mali, shared this concern, urging Chad to maintain his military presence after France’s departure. LeDrian warned of a possible “security vacuum,” which should encourage President Chad Idris Déby to abandon his contingent.

No less disturbing is the political vacuum in Mali itself. The Minister of Foreign Affairs of France, Laurent Fabius, while in Bamako, called in July to hold national elections, a means of restoring democratic legitimacy in the country. But political forces in Mali, in turn, are closely following each other during intense political maneuvers. The most ominous political force is the Tuareg, united under the leadership of the separatist “National Movement for the Liberation of Azawad” (MNLA), whose efforts to gain independence from Bamako last year and led to a crisis in the country, they refuse to recognize the legality of finding Malian soldiers in their territory. The MNLA vice president recently warned that as long as Bamako refuses to negotiate the future status of Azawad, MNLA will not participate in the July elections. Fabius, for his part, noted that “a democratic state cannot have two different armies,” the MNLA itself, which insists on secession from Mali with this thesis, of course, agrees. And even the ongoing elections may not bring consent to the society.

But Mali remains not the only French-speaking nation suffering from intense political and tribal contradictions. Over the past few months, French politicians have literally pushed through the bill on the legalization of same-sex marriages across all levels of legislative power. This bill is the third reason why French society treats events in Mali with relative indifference. It is no exaggeration to compare the current manifestations and unrest associated with the introduction of this scandalous law with the so-called “Guerres franco-françaises” - civil wars, which periodically erupt in France since the 1789 revolution.

Tellingly, over the past three months, representatives of the French intelligentsia have paid relatively little attention to armed intervention in Mali. This is partly due to the fact that their status and authority, like that of French politicians, has sharply declined recently. They can no longer claim to be moral leaders, as they have been doing for centuries, stretching from the heyday of Emile Zola, and Jean-Paul Sartre. They can no longer discuss with the government questions that require professional or technical knowledge. This was quite cruelly shown at the end of April, when the philosopher Michel Onfrey was brutally defeated at a forum organized by the “LeMonde” publication. Onfrey criticized the invasion of Mali as a strategic mistake. In response, two military historians mercilessly rolled Ofrey’s vague references to Clausewitz and Sun Tzu, as well as his shaky view of military strategy.

More importantly - and this again brings us back to the concept of the Franco-French war - most of the country's intelligentsia is deeply concerned at the simultaneous deepening of the political powerlessness of the socialist government and the intensification of mass demonstrations against same-sex marriage. This is not surprising: crowds of demonstrators waving placards that read: “We will not stop, even if the law is passed”, “Listen, Hollande: France on the streets”, “Hollande is not my president” and “Abortion plus same-sex marriage is equal to euthanasia” . One of the opposition leaders compared Hollande with Hitler and described the new law as a “coup d’état”. When the leader of the opposition movement calls the president a “dictator,” declares that if “Hollande wants blood, he will receive it,” it can be assumed that the main danger for the Fifth Republic comes not from the motley gathering of Islamists who roam the stony deserts in Mali ...