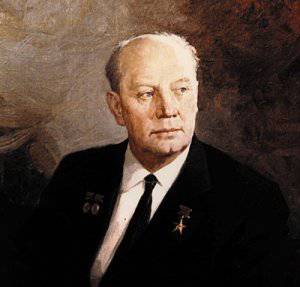 25 August marks 105 since the birth of one of the creators of anti-aircraft guided missile systems. weapons Alexander Andreevich Raspletin.


ALEXANDER RASPLETIN 25 was born on August 1908 in the town of Rybinsk, Yaroslavl Region, in the family of merchant son Andrei Alexandrovich Raspletin and his wife Maria Ivanovna. Still a young man, at school, became interested in the radio. In December, a general meeting of radio amateurs of Rybinsk took place on 1925, then there were 35 people there, and the schoolboy Raspletin was brought into the organization's bureau. In the period from 1926 to 1929, he was chairman of the short-wave section of the Friends of the Radio Society in Rybinsk.

After graduating from school in 1926, Raspletin began working in a warehouse, where he was at first a simple worker, then an electrician, a radio mechanic, for several months he was in charge of a cinema-radiobase workshop. After moving to Leningrad in 1930, he continued to work as a radio technician at the Comintern plant, then he moved to the Central Radio Laboratory, where he worked as an engineer.

At the same time, he is studying at the Leningrad Electrotechnical College, in 1932 he enrolled at the Leningrad Electrotechnical Institute with a degree in radio engineering. His independent scientific activity begins with 1933. He is appointed to the post of senior engineer - head of the television group. In April, 1936, after graduating from the institute, Raspletin transferred to the research institute-9 as a senior engineer, soon becoming head of the laboratory.

Raspletin's article “Television Receiver” is published in 1938 in the journal “Izvestia of the Electric Industry of Low Current”, which gives a brief description of the schemes and designs of the first model of a domestic television receiver of industrial type developed by the television laboratory NII-9 under his leadership to receive programs from Leningradsky and Moscow television centers.

Raspletin's research work of this period is also connected with his participation in the creation of television equipment for “the greatest construction of the world” - the Palace of Soviets in Moscow. According to the project, it was assumed that a number of halls in which stationary cinema installations were designed should also be equipped with special projection television receivers, allowing to provide images on screens up to 10 – 15 square meters in size. Raspletin together with I.M. Zavgorodnev, P.Kh. Blumenthal, B.M. Friedman, N.P. Kuznetsov, E.E. Friedberg and N.I. Organ was able to develop a receiver with a screen area of ​​12 square meters.

In 1940, he takes part in the 5 correspondence radio exhibition, at which 32 TV designs were presented. The receiver, designed by him, won the first prize. It was designed for the possibility of receiving both Leningradsky (240 lines) and Moscow (343 lines) telecentres, in addition, after a simple rework, was capable of receiving a signal on the new definition standard in the 441 line. 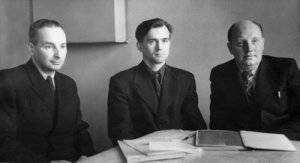 IN 1940 YEAR Raspletin began working on the issue of using television installations for aerial reconnaissance, and was interested in other possibilities of using television in military affairs. In June 1941, the Raspletin laboratory was left in Leningrad to do this work, but with the beginning of the blockade of the city, all of them were curtailed, and the laboratory staff began to manufacture radio stations for the front.

At the end of January 1942, they were evacuated from besieged Leningrad to Krasnoyarsk. At the radio plant of this city, Raspletin worked for several months as a senior engineer, and in September 1942 was seconded to Moscow to work at the Design Bureau of the All-Union Electrotechnical Institute.

In the television group of the design bureau of this institute, work was carried out on the "Development of an integrated installation for guiding fighters to the target" commissioned by the fighter aviation Air defense of the country. With the transfer of this group in November 1942 to TsNII-108, work continued in Seleznev’s laboratory. The receiving equipment complex was created under the supervision of Raspletin, who became the head of the laboratory. Tests of this system were carried out in 1942-1943. Subsequently, the equipment was repeatedly used to provide aviation in parades.

At the TsNII-108, Alexander Andreevich became involved in radiolocation issues. During the seven years of work (1943 – 1950 years), more than five major research projects were carried out under his leadership and with the direct participation. One of such works is the radar SNAR-1. For this work, he was awarded the State Prize in 1951 year.

In 1947, Raspletin defended his Ph.D. thesis on the theme “To the calculation of a single-tube sawtooth generator”. He addressed this issue for the first time in the pre-war years. In September, 1949, Alexander Andreevich was approved as a senior researcher in the specialty "radio engineering" of the Central Research Institute-108.

ALL NEXT the period of work of Alexander Andreevich is connected with KB-1 (at present, the State Design Bureau Almaz-Antey). In August, 1950 Raspletin was transferred to KB-1 to work on the creation of the Berkut system (C-25) as the head of the radar department, but soon he became first actual and then officially the chief designer of the system. The work was carried out in superstretched mode. Already in April, 1953, during the tests, carried out the first successful firing on a target analogue - the Tu-4 target aircraft.

In May 1955, the C-25 system was put into service. On the basis of the C-25 ZRS, the first Soviet anti-aircraft guided missile system, by the middle of the 1950-s, an echeloned zonal anti-aircraft missile defense of Moscow and the Moscow industrial region was created. The life cycle of the C-25 system was more than 30 years, while it was subjected to multiple upgrades to maintain the necessary combat effectiveness.

Created for the first time in world practice, a multifunctional and multichannel radar not only provided detection and automatic tracking of aircraft to 20 in the 60 degrees sector, but also carried out simultaneous targeting of aircraft to 20 missiles. Capture of missiles after the launch was carried out automatically. With a massive enemy raid (up to 1.000 machines), the entire 56 complex was required.

In July, 1955, Alexander Andreevich was appointed chief designer of the enterprise in the direction of air defense and the head of the special design bureau. In 1956, Raspletin was awarded the title Hero of Socialist Labor for leadership and participation in the creation of samples of the new technology, and in November 1956 was approved in the degree of Doctor of Technical Sciences without defending a thesis on the totality of work performed.

In October, 1954 of the year, in parallel with the progress of work on the C-25 system, KB-1 began the development of transportable anti-aircraft guided missile weapons with a limited deployment time (collapse) to positions for building territorial-object defense. Such a weapon was the anti-aircraft missile system C-75.

S-75 was developed on the basis of the principles laid down in the unique C-25, including the principle of ensuring linear scanning of space in orthogonal planes. However, during the design of the air defense system, many scientific and technical innovations were found and implemented. In December, the 1957 system was adopted. And in 1958, Aleksandr Andreyevich Raspletin was awarded the Lenin Prize for leadership and participation in creating the C-75 air defense system, and in the same year he was elected corresponding member of the USSR Academy of Sciences.

Somewhat earlier, in May of 1957, development of the C-1 air defense system began in KB-125. The creation of the complex was caused by the appearance of a potential enemy aircraft capable of operating at low altitudes (less than 1 km) as part of the means of an air attack. The system was put into service in June 1961.

In September 1957, Raspletin is appointed head of the SKB and chief designer of the enterprise.

AT THE END OF 1950's In the composition of the means of air attack of NATO countries, there are significant changes. The situation that arose required an adequate response, which led to the creation of anti-aircraft guided missile weapons, which ensured the defeat of large-sized air targets at long ranges, as well as high-speed targets in the stratosphere. A long-range system was also needed to create air defense of large territories.

The first-ever system of such class transported was the ZRS C-200, set for development in June 1958. When it was created for the first time:

- principles for constructing radar facilities for SAM (radar target illumination and semi-active homing missile heads) and requirements for their equipment, providing a combination of high accuracy measurements of speed and angular coordinates of the target and resolution capabilities in speed and distance;
- the principle of semi-active homing of a rocket on a target is implemented based on the use of a flight control system in the onboard equipment of a rocket from the start to the meeting point;
- special methods of noise protection were implemented, allowing to ensure high firing efficiency both at targets in conditions of intensive cover noise and for directors of active interference of various types.

The system was adopted in February 1967.

In addition to the subject of air defense, work was carried out in KB-1 in other areas. One of them is the development of the “Azov” system to protect objects from the attack of single ballistic missiles (launched in June of 1962).

Great scientific knowledge, creative courage in solving complex technical problems and brilliant organizational skills Raspletin allowed him to become the general designer and responsible manager of the company. He was appointed to office in January 1961. General Designer, he remained until the end of his life. In 1964, Alexander Andreevich was elected a member of the USSR Academy of Sciences.

Shortly before his sudden demise (8 of March 1967), Alexander Andreevich took the initiative to begin work on the unified multichannel system of the new generation C-300. This system was planned to replace previously created samples. It was supposed to ensure the destruction of all types of modern and promising aerodynamic targets, including cruise missiles of all types, massively used both at high and at low and very low altitudes. Such a system was created after his death.

MEMORY He is alive not only in the systems and complexes developed by the team of his native enterprise, named after Academician A.A. Raspletina with 2001 year. A gold medal named after Academician Raspletin, the USSR Academy of Sciences awarded the Soviet scientists once every three years for outstanding work in the field of radio control systems. Since 1994, the Russian Academy of Sciences has awarded the Academy Award of the Academy of Sciences once every three years. Raspletina for the best achievements in the field of creation of radio engineering systems of automated control.

In 1967, his name was given to the radio technical school in Moscow (now it is the Moscow radio engineering college named after academician A. Raspletin, which celebrated its 60 anniversary 29 in March 2012 of the year). The streets in Moscow and Rybinsk bear the name of Raspletin.

The funds of the Rybinsk State Historical-Archival and Art Museum-Reserve carefully store materials related to the life of Raspletin in the city. Since 2003, Rybinsk hosts annual city competitions of radio amateurs in memory of a scientist (from 2007, the Yaroslavl Region Radio Communications Cup in VHF in memory of Academician A.A. Raspletin).

The name Raspletin is named the crater on the far side of the moon.

A bronze bust of Academician Raspletin is installed on the territory of the Almaz-Antey State Design Bureau, and a memorial plaque is placed on the facade of the central building. In December, 2002 began to work the museum of the enterprise, in the exposition and funds of which there are materials related to its life and activities.

Alexander Andreyevich Raspletin is a truly unique person, and it seems that in Russia, his contribution to the development of science and the provision and strengthening of the state’s defense capability are still not fully appreciated. This has yet to be done.

Ctrl Enter
Noticed oshЫbku Highlight text and press. Ctrl + Enter
We are
Pre-Designed TimeFrom the history of own names of aircraft of Russia in 1930-ies
Military Reviewin Yandex News
Military Reviewin Google News
9 comments
Information
Dear reader, to leave comments on the publication, you must to register.