Training flights on the Yak-130 in Borisoglebsk

August 22 2013
14
Colleague dmitrydreamer posted interesting photo story about passing the final exam on August 8, 2013 for the flight training of the squadron of cadets who have been training on the new Yak-2013 combat training aircraft since March 130 as part of the 209th training aviation base of the Borisoglebsk Aviation Training Center for training flight personnel of front-line, bomber and attack aviation named after V.P. Chkalov of the Russian Air Force (Voronezh Region). The Borisoglebsky Training Center is a branch of the Krasnodar Military Aviation Institute named after A.K. Serov - a branch of the Military Training and Scientific Center of the Air Force “N.A. Air Force Academy Zhukovsky and Yu.A. Gagarin. " The group of cadets who successfully passed the exam was the first in the Russian Air Force to be trained on the Yak-130 aircraft.


On this occasion, Colonel Oleg Kochetkov, head of the press service of the Western Military District (ZVO), reported to August 8: “Russia's first squadron of cadets-pilots of the Borisoglebsk Aviation Training Base, trained on the latest Yak-130 combat training aircraft, successfully passed the final exam on flight training. State exams on air navigation and piloting techniques were taken by 15 young pilots. " The exam "included the independent performance of elements of complex aerobatics - flying at low altitude, diving, slides, barrels, loops and half loops. All flights took place at altitudes from 200 to 2000 meters," Kochetkov explained.

"The cadets who successfully passed the state exams today first started flying to the Yak-130 at the end of March 2013. The average flight time per cadet was 65 hours on this type of training and combat vehicles, flights were performed both during the day and at night At the same time, the total flight time during training was more than 200 hours for each cadet, ”said a spokesman for the ZVO, adding that the release of young officers from the walls of the Krasnodar branch of the Military Air Academy will be held on October 26 this year. 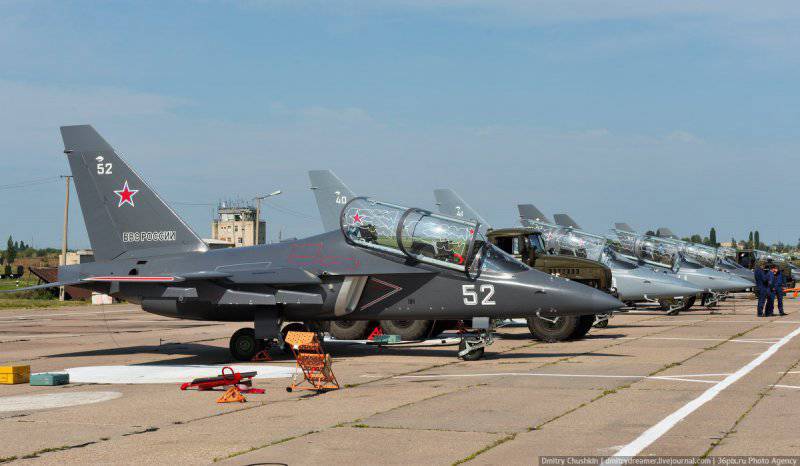 The line of training and combat aircraft Yak-130 from the 209-th training aviation base Borisoglebsky Training Aviation Center. The nearest aircraft of the newest building with the tail number "52 white" was put on the airbase in July 2013. 08.08.2013 (c) Dmitry Chushkin / dmitrydreamer.livejournal.com