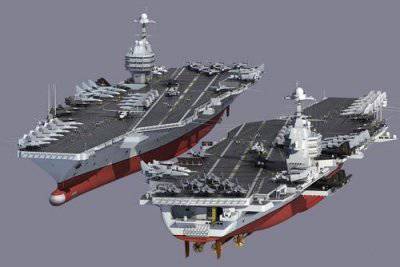 China has sufficient production capacity for the construction of an atomic aircraft carrier, but many key technologies, primarily nuclear, are missing, mil.news.sina.com.cn writes today.


The United States is the most developed country in the design and construction of nuclear aircraft carriers. This country has developed three types of ships of this class - "Enterprise", "Nimitz" and "Ford".

Enterprise is the first nuclear-powered aircraft carrier in the world. fleet in 1961. The ship is equipped with eight nuclear reactors and is capable of carrying up to 90 aircraft, a crew of 5800 people. For 51 years of operation, the ship took part in the blockade of Cuba, was sent seven times to participate in the Vietnam War, and was an active participant in the events during the Cold War. The aircraft carrier was withdrawn from the Navy in December 2012 and sent for dismantlement.

The Nimitz class aircraft carriers are the second generation of American AVMAs (according to the Soviet foreign classification, the multipurpose atomic aircraft carrier - approx. "VP") and are currently the largest warships in the world, 10 units built. The lead Nimitz was laid in the 1968 year, accepted into the fleet in the 1975 year, the construction of the last ship of the series “George. Bush began in the 2003 year, joined the Navy in the 2009 year. The crew of the aircraft carrier 5600 man, capable of carrying up to 90 aircraft and helicopters.

"Gerald Ford" is the third generation of American nuclear aircraft carriers, according to the plan should join the fleet in 2015 year, before 2058, it is planned to build 10 ships of this type. The ship is equipped with two powerful water-cooled reactors, the crew of a 4500 man capable of carrying at least 75 aircraft.

10 class aircraft carriers “Nimitz” have a total displacement of almost 1 million tons, which has become synonymous with a powerful military fleet. The second country to build an atomic aircraft carrier is France.

The aircraft carrier "Charles de Gaulle" began to be built from 1987, in 2000, the ship received a more extended flight deck, which housed the AEW "Hokai" aircraft. The entire project was spent 80 billion francs, which is almost 6 times the original estimate. These expenses have become a huge "black hole" of the military budget of France.

However, an aircraft carrier with a displacement of 40 thousand tons does not fully meet the requirements of the French Navy. There was no dock in the country for building an aircraft carrier of large dimensions and displacement, the two K-15 nuclear reactors used on the ship (the French SSBNs are equipped with them - according to the Soviet foreign classification, “submarine nuclear ballistic missiles” - approx. VP) the shaft is only 76200 hp, which allows the ship to reach a maximum speed of all 25 nodes. It is the slowest aircraft carrier in the world, built after the Second World War, and besides it often crashes. As the French say, if the “Charles de Gaulle” went out to sea, wait for him to catch the harbor before the time.

Compared with France, China has large building docks. In 2007, three major shipbuilding and ship repair centers appeared in Shanghai (Changxing), Qingdao (Heihu Bay) and Guangzhou (Longju). At present, there are 8 docks in China, where it is possible to build ships with a displacement of more than 300 thousand tons, by the year 2015 their number can approach 40. For the construction of an atomic aircraft carrier, a new dock in Dalian and Changxing can be used (the length of the last 365 m, width 82 m, depth 14,1, there is one 800-ton gantry crane). In the US, aircraft carriers are built at the shipyard with a dock length 488 m, width 76,2 m, for comparison, the length of the dock at the shipyard in Brest, where the Charles de Gaulle was built, is only 270 m.

In addition, China is lagging behind the developed nuclear countries in the production of highly enriched uranium for fuel rods of nuclear reactors, as well as in the field of advanced materials used in nuclear energy. It is also necessary to achieve a high level of nuclear safety. If a catastrophe occurs on an atomic aircraft carrier, great harm will be caused to the ecology of the sea and the life of a crew of several thousand people will be put at risk.

Thus, it is not enough to simply increase the number of large shipyards, we need a breakthrough in the field of critical technologies, the author of the article stresses.