August 23 2013
22
Recently, one can observe a huge interest in arms designed by designer Baryshev. A small return in the conduct of fire and, as a consequence, the high accuracy of the weapon gives rise to many disputes that the designer’s work was underestimated and his designs would be much better than those currently in service, even if they were mass-produced. And mass production, especially with us, is capable of hacking at the root any good idea. Designer Baryshev has developed a lot of very interesting types of weapons, which have already been written a huge amount of materials, but one sample, for some reason, always miss or mention it in passing, simply noting its existence. We are talking about the Baryshev pistol, which once participated in the competition with a Makarov pistol, in which he made a good competition to the winner. 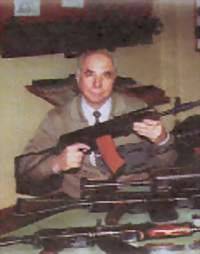 In principle, it is not surprising that little is known about this Baryshev pistol. The thing is that, unlike other models of the weapon of designer’s authorship, this gun is very simple, actually primitive, but this is only in comparison. In fact, despite the simplicity of the design, this gun showed better results, including the accuracy of fire, but it was less reliable compared to the same PM, which is why he lost in the competition. The simplicity of the weapon is explained by the fact that low-power ammunition was used in the pistol, so, in this case, it was pointless to wise the automatic weapons, since automatic control based on the free gate was quite successful with such a cartridge. Nevertheless, some of the solutions that the designer applied were interesting, though not new. First of all, it should be noted that the return spring was located under the barrel of the pistol on the non-removable rail. Thus, in the case of incomplete disassembly of the weapon, the pistol was divided into only three components: the pistol itself, the bolt cover and the magazine. The advantage seems to be not so great, but as superiority over other samples can be noted.

Much more interesting was the fact that the design of the firing mechanism was such that it was possible to fire immediately, if necessary, although at the same time the safety of the weapon was very high. This was achieved as follows. The trigger mechanism had a fuse, or rather a safety trigger of the trigger (intermediate position between the trigger and cocked trigger), which was turned off when the trigger was pressed. In other words, the fuse was turned off when firing by the self-coax, something like a modified version of the TT trigger mechanism. In my opinion, the designer was somewhat wise with the protection system, as in most cases it is quite enough just a tight pick-up, so that there is no accidental shot, unless you exclude those cases when you play football with a cartridge in the chamber. In the end, the automatic safety of the firing pin was already known at that time, so it was possible to solve the problem in the same way. One way or another, but during the competition this high safety pistol and the ability to instantly fire if necessary was noted separately. 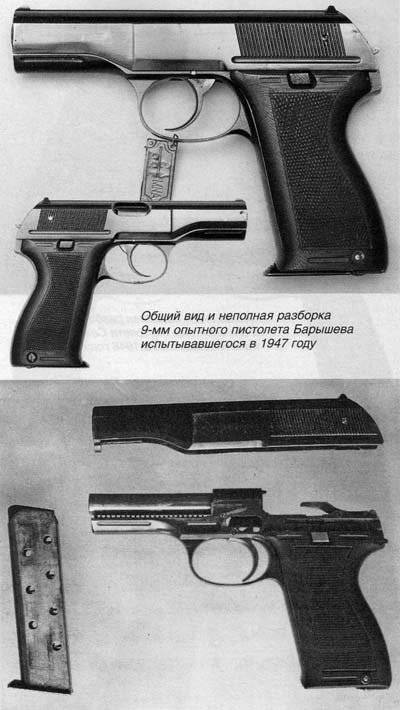 It works like a weapon. By inserting a magazine into the gun, the shooter detracts from the cover-bolt and releases it, thereby cocking the trigger and sending the cartridge into the chamber. After that, the trigger is removed from combat platoon and set to the position of the safety platoon. In such a half-isolated state, a weapon can absolutely safely be worn by the shooter until the first need of use. If necessary, shoot, the shooter simply pulls the trigger, if there is time, having previously cocked the trigger, thereby reducing the pull force on the trigger and increasing the accuracy of the first shot. Thus, the trigger is either first docked, and then breaks, or immediately breaks. A punctured primer with an initiating compound ignites the powder inside the cartridge, which accordingly begins to burn, emitting a very large amount of powder gases. Since the powder gases become more and more in the process of burning powder, they try to increase the distance between the bullet and the sleeve, thereby increasing the volume and reducing the increased pressure. So the bullet accelerates down the barrel of the gun and leaves it. However, the powder gases not only push the bullet, but also have exactly the same effect on the cartridge case, pushing it back.

The sleeve, trying to move backward, transmits energy from the powder gases to the shutter-casing, which in its mass is much heavier than a light bullet, respectively, and its speed of movement is less. Due to its mass, the shutter casing moves back even when the bullet has already left the barrel and the pressure of the powder gases is reduced. Thus, the shutter casing receives the energy necessary for its complete retraction and simultaneous compression of the recoil spring, as well as the trigger cocking. Having reached its extreme rear point, the cover-shutter stops for a split second and under the action of the return spring begins to move forward, removing the new cartridge from the magazine and inserting it into the chamber. The next time you press the trigger, the next disruption of the trigger occurs, respectively, the next shot also takes place, which sets the entire structure in motion on the same plan.

It is far more interesting that at the same competition when comparing the PM and Baryshev's gun, the appearance of the weapon was noted, and not in favor of the latter. Honestly, I don’t know what the Baryshev’s gun didn’t like outwardly, in my opinion a quite nice sample that is not worse and not better than the same PM. And if you imagine a rounded "face" of a weapon with a noiseless firing device, then you get a handsome man. It should also be noted that the gun does not have controls that could catch on the clothes when removing the weapon, even the shutter lag is controlled using the button, duplicated, by the way, on both sides of the gun. The magazine is fixed with a spring-loaded latch at the bottom of the handle, similarly to all the same PM. An interesting point is that the trigger pistol sector, that is, in any of its provisions, it closes a slot on the back of the housing-bolt, which reduces the amount of dirt that can get into the weapon. Nevertheless, even such a measure of protection against dirt did not make the weapon super reliable, even in ideal operating conditions. 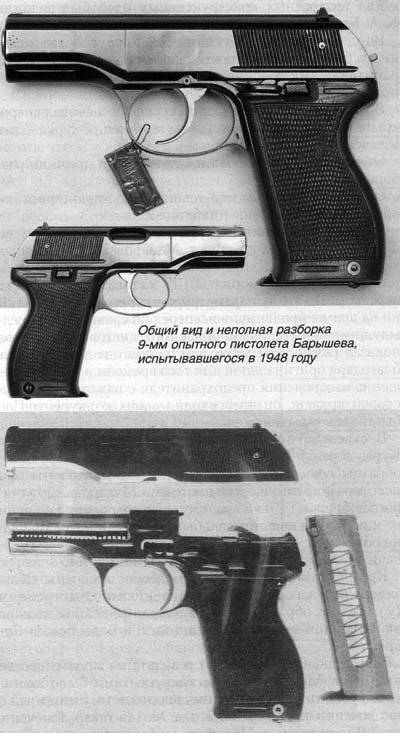 The main problem of the weapon was that the designer set the high precision of the pistol for the sake of reliability. Since the gun consisted of many parts, specifically 37, when fully disassembled against Makarov's 27 pistol, its reliability was, by definition, lower. All the same, whatever one may say, but the simpler the device is, the more reliable it is, a vivid example of that scrap, although it can be, if not broken, then bent with enough enthusiasm. All parts of the weapon were fitted with minimal tolerances, because moisture, dirt, and just old grease could be the reasons for the failure of the weapon. But in accuracy, this weapon bypassed all its competitors in the competition, although it is not known what would happen to the gun if it were launched into mass production. The reason for failure under ideal conditions of weapon operation was often that the shutter did not always roll back all the way back, respectively, the spent cartridge coming out of the chamber returned into it and recharging was not carried out. It is difficult to say what was the cause of such a problem without encountering it personally. Perhaps the reason was too rigid return spring, and perhaps all the same fitting of parts in the amount gave such a result. One way or another, the designer was in no hurry to change anything in his gun, so it can be assumed that, with increased manufacturing tolerances, the gun would lose its high accuracy.

So at various distances compared to the same Makarov pistol, Baryshev’s pistol turned out to be a quarter more accurate, while the sample’s failures were equal to 0,84 and the percent of shots in ideal conditions, when the Makarov pistol could “boast” of only four hundredths of a percent. Well, since we started talking about numbers, it is impossible not to note the size and weight of the weapon. The length of the Baryshev pistol is 162 millimeter with the barrel length 95 millimeters. The height of the weapon is 120 millimeters, thickness is 30. Gun weight is 735 grams. It would be possible to say that the weapon is more accurate in comparison with the PM because of the greater weight and the greater length of the barrel, but agree that 2 millimeter and 19 grams are weak arguments.

So you can summarize. The Baryshev pistol is indeed a more accurate weapon in comparison with the PM, but this accuracy is achieved not by the design features, but by the high precision of parts manufacturing. The consequence of this accuracy is the low reliability of the weapon. In general, in this case, the weapon clearly cannot claim a deserved place for the PM, well, let's try to sort out the rest of the samples in the following articles.