For the best interests of the United Kingdom

August 22 2013
33
Western historians, listing the largest naval battles of World War II, the battle of Mers-el-Kebir shyly bypass. And there are reasons for this: 3 July 1940, off the coast of North Africa, the British and French squadrons met in a fierce battle. What happened, for whatever reason, yesterday's allies in the fight against Nazi Germany became mortal enemies? 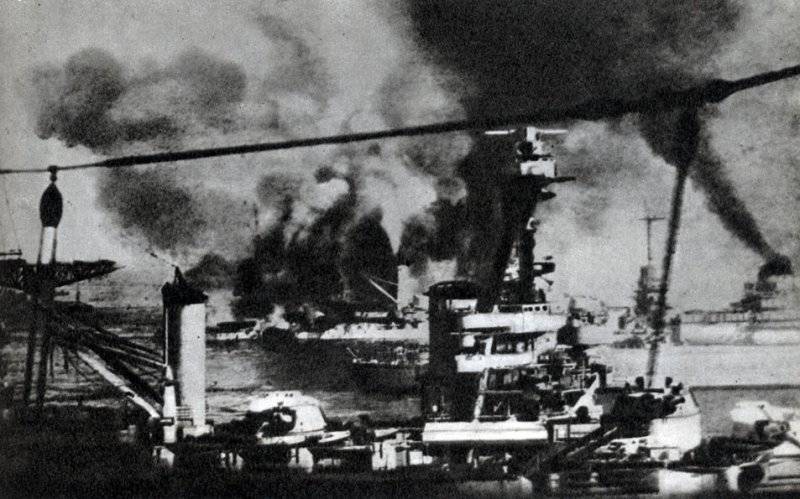 10 May 1940, the Wehrmacht troops set foot on the territory of Belgium and Holland, thus violating the neutral status of these powers. May 13 Wehrmacht troops crossed the Franco-Belgian border. The French army was overturned for several days and by the end of May ceased to exist. Paris surrendered to the mercy of the winner. 14 June, German troops entered the capital of France and marched victoriously along the Champs Elysees. Hitler forced France to drink a full cup of shame. The carriage which was carefully kept by the French, in which General Foch accepted German surrender in 1918, was reanimated to life. The museum exhibit was again filled by people in military uniforms, only this time France signed the capitulation. 1 / 3 of the country, including the heart of France - Paris, was occupied. On the remaining territory was organized so-called. “Vichy regime” (according to the name of the resort town where the government of the “free zone” is located).

The French fleet must not become German!

At the disposal of the Vichy regime, formally considered independent, but in practice controlled by the Nazis, remained the colonial troops and the fourth in the world in its power navy. Vessels were stationed in various ports of North and West Africa, some - in Toulon, about 200 ships stood in various ports of Great Britain. In London they seriously feared that these ships could at any time become part of Kriegsmarine. If this happens, the combined Italian-German fleet will become the full owner of the Atlantic, not to mention the Mediterranean. British Prime Minister Churchill believed that French ships needed to be interned and disarmed, and in the event of resistance, to sink. The operation received the name "Catapult." 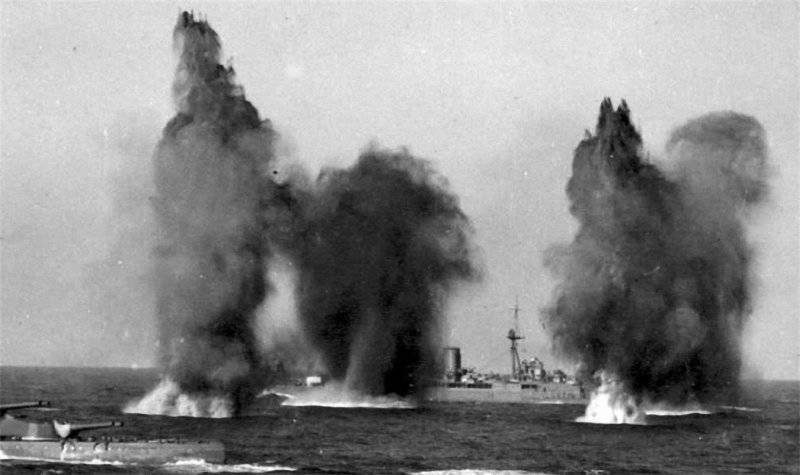 To carry out operations from the composition of the British Navy, a group was designated that received the name "Compound H", which included 2 battleship, 1 linear and 2 light cruisers, 11 destroyers and 1 aircraft carrier. The British intended to fight with their ally seriously: the ships went to sea with full ammunition. The operation was scheduled for July 3.

On the night of July 3, the commandos arrived in the English ports where the French ships were stationed. Under cover of darkness, they seized ships and handed over to the captains ultimatums demanding that the ships be handed over to the protection of the British authorities. The captains protested, but this did not solve anything. The French team of the captured ship landed on the beach, the British flag was raised on the mast. This phase of the operation took place without incident, only in Portsmouth, on a submarine, "Surkuf" had time to raise the alarm and resisted. A French officer and a British 3 died in a shootout. Within a day, about 200 ships changed their nationality. The British Navy is replenished with 2 battleships, 10 destroyers, 7 submarines.

In the port of Alexandria, everything was resolved by mutual agreement: the battleship Lorian, four cruisers and several destroyers leaked fuel, removed the locks from the guns and transferred them to the British. In the Senegalese Dakar, where the newest battleship Richelieu, the 3 cruisers, the 3 destroyers and several submarines were stationed, everything did not go so peacefully. The French refused the ultimatum. Then torpedo bombers took off from the British aircraft carrier, the main caliber guns began to speak. "Richelieu" got a hole, the keel bent over 25, one of the propellers failed. Having found their mission accomplished, the British ships withdrew. The battleship was disabled and henceforth was used only as a floating battery.
But the most tragic events unfolded in the naval base of Mers-el-Kebir, where the real naval battle took place.

One of the largest naval battles of World War II

At the naval base of Mers el-Kebir were the most significant forces of the French fleet: the latest high-speed battleships “Dunkirk” and “Strasbourg”, 2 old battleships “Brittany” and “Provence”, 1 aircraft carrier, 6 destroyers, minesweepers and other vessels. They were the main goal of Compound H. Around 9:30 a.m. on July 3, British ships approached the base of the French Navy. The British were clearly not expected. French ships were locked in a tight bay. To the battleship Dunkirk, on the mast of which the flag of the squadron commander Admiral Zhansuh fluttered, a boat went with an officer who was instructed to deliver an ultimatum. The French were offered a choice of:
1. Join the British fleet and join the fight against Germany.
2. Get under the escort of British ships to England and interned there.
3.With small crews under an English escort, go to the French West Indies or to the ports of the United States and intern there.
4. Fire the ships.
The term of the ultimatum is 6 hours.

While awaiting a response, Vice-Admiral Somerville, commander of Connection H, raised his binoculars to his eyes and saw how the French sailors were uncovering their guns. No longer waiting for the boat with the officer to return to the battleship, the admiral ordered me to play alarm.

Bombers took off from an aircraft carrier. The British ships attacked the French with all the power of their naval guns. French ships, coastal artillery fired back. The battleship "Provence", having received a hole, nuzzled the shore. The “Brittany” caught fire and exploded; in black clouds of smoke the souls of French sailors 977 ascended to heaven. Serious damage received "Dunkirk." The destroyer "Mogador" received a projectile in the stern, which detonated depth charges. The crew was able to throw the destroyer practically left without stern aground. The French ships (those who still remained afloat) went for a breakthrough. At the head went with the burning stern "Strasbourg", on the move firing from all guns. Somerville ordered to put up a smoke screen and move away from the bay. Burning battleship attacked torpedo. The first wave of attack, the second. Strasbourg snapped anti-aircraft fire and shot down an 3 aircraft. Together with the leader, 5 destroyers were able to break through the barrier and leave the harbor. July 4 black from soot, crippled, but proud "Strasbourg" at the head of its small squadron entered the port of Toulon, where the remnants of the French fleet converged.

On July 6, Compound H arrived again in Mers al-Kebir. This time the main striking force was the British aviation. 12 torpedo bombers attacked the Dunkirk. One of the torpedoes hit a standing guard with a load of depth charges. The bombs detonated, the consequences were terrible. "Dunkirk" received damage that practically put him out of order. At this point, French fighters took off from coastal airfields. Just yesterday, brothers armsThe British and French pilots now looked at each other through the reticle. One by one, burning English and French aircraft fell into the sea. Dunkirk was on fire. In 1942, he will still be able to leave the harbor, but his battleship has lost its value forever.

In general, the results of the operation "Catapult" in London were satisfied: the UK secured indisputable domination of the sea. 7 French battleships, 4 cruisers, 8 submarines, not counting other ships, were in any way removed from the game. The Royal Navy has replenished with new combat ships. And all this - without losing a single vessel! When Churchill reported on the results of the operation in parliament, the deputies gave him a standing ovation.

Vichy regime after the events of 3-6 in July broke off diplomatic relations with London and intensified anti-British propaganda. General de Gaulle condemned the attack of the British on the French fleet, but he could not afford more, in his struggle for the liberation of the motherland he was entirely dependent on the support of Britain. Ordinary French 3-6 July events perceived as a betrayal by yesterday's allies. The number of collaborators and volunteers who want to serve in the Wehrmacht has increased.

In his memoirs, Churchill wrote: “It was a cruel but necessary blow to yesterday’s allies.” History did not confirm the fears of the British. November 26, 1942, when the German entered Toulon Tanks, French sailors flooded the vessels in the harbor. 3 battleships, 7 cruisers, 32 destroyers, 16 submarines, 18 patrol boats and other vessels went to the bottom — about 77 ships in total. Not a single French ship went to the Nazis.

But the British never questioned the feasibility of Operation Catapult, and the death of more than 1300 French sailors, British and French pilots attributed to the inevitable costs for the triumph of the highest interests of Britain. 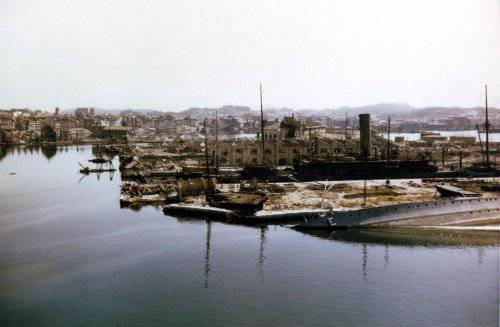 The harbor of Toulon after being liberated by its allies. The remains of the port buildings and the hull of the submerged ships are visible. Shot on August 30 1944. 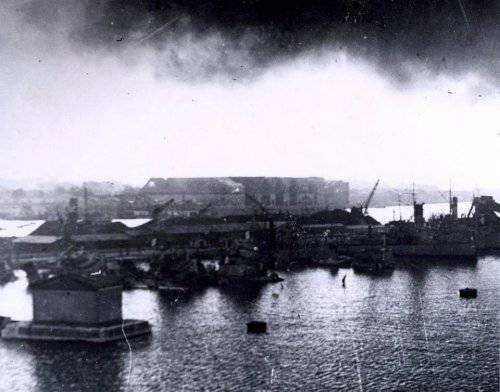 Toulon, France, during the flooding of the French fleet 27 on November 1942, before the German occupation. Ships from left to right are Chamois, L'Impetueuse, La Curieuse, Dedaigneuse, Yser, and auxiliary mine-sweeper Roche Bleue. Most ships were saved and served the Germans or Italians. 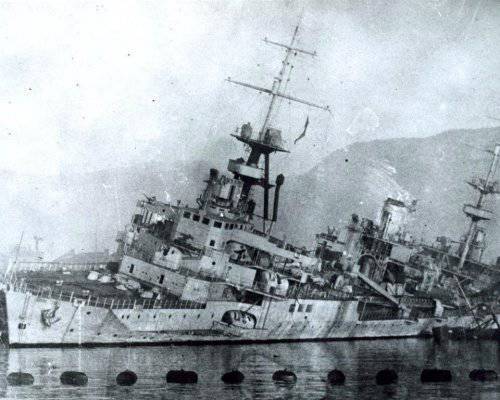 Commandant Teste seaplane carrier during the flooding of 27 on November 1942 of the year. Raised only in the 1946 year and was not used for its intended purpose. 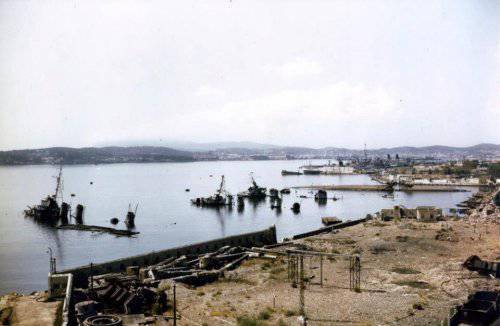 Naval shipyard in Toulon after the sinking of the French fleet.
Ships in foreground (left to right): Tartu, Cassard and L'Indomptable. (Sank, but vertically), Vautour (completely sank) Aigle (capsize). In the far distance, the OBB Condorcet is partially dismantled. Notice the guns on the beach. Filmed at the end of 1944. 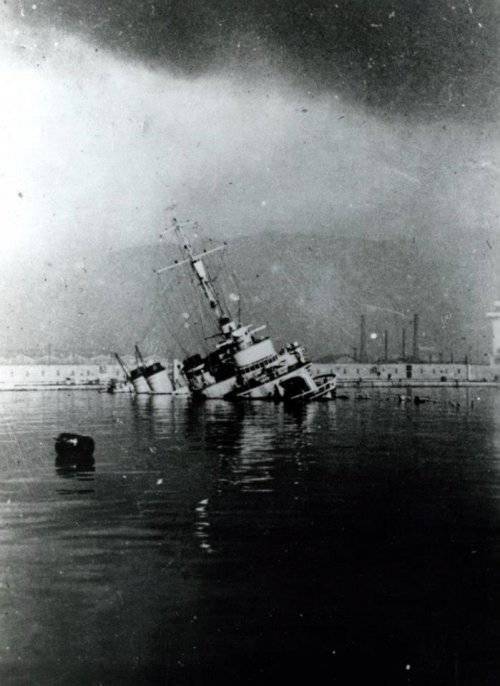 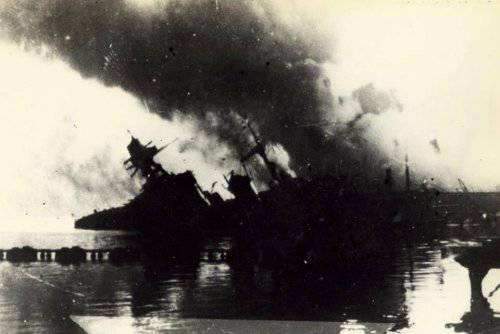 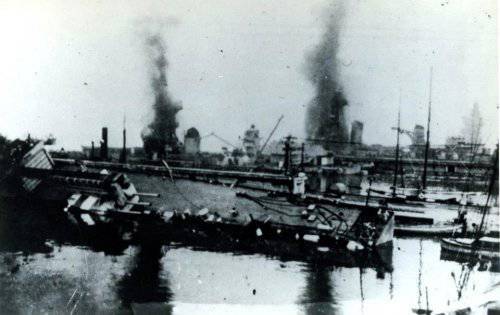 Stern light cruiser Marseillaise after flooding. In the background are visible pipes and superstructures of the heavy cruiser Algerie.

The remains of the battleship "Dunkirk". Damaged by the British during Operation Catapult, he ended his days in the harbor of Toulon. 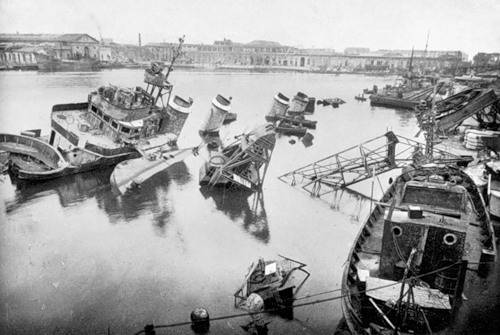 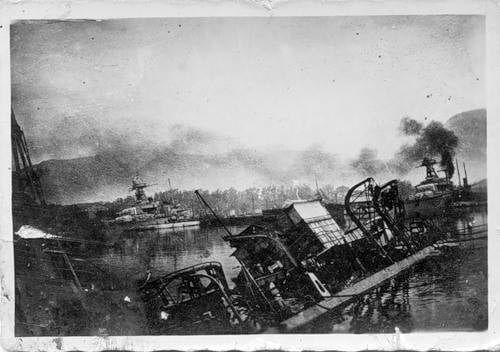 In the foreground the leader of the destroyers "Gerfo" is flooded, in the background is "La Galisonier" and "Jean de Vienne".

The remains of the battleship "Dunkirk" exploded and submerged in the dry dock of Toulon. 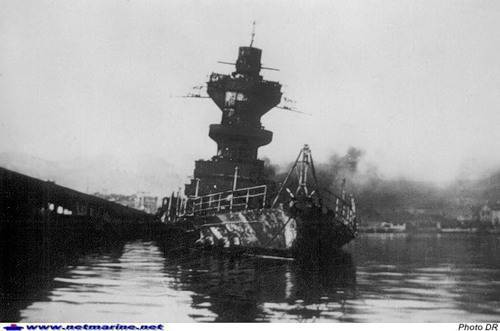 The heavy cruiser Algiers was blown up and set on fire by its crew on November 27, sat on the ground and burned until December 16. Attempts by the Italians to raise the cruiser did not bring success. It was raised only in 1949 year and in 1956 it is cut into metal. 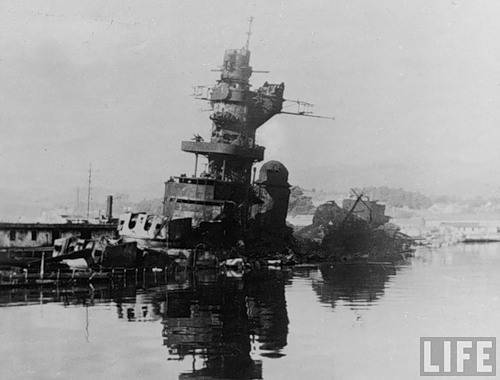 The remains of the heavy cruiser "Algeria" 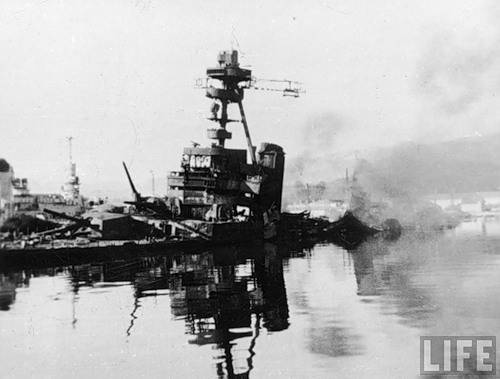 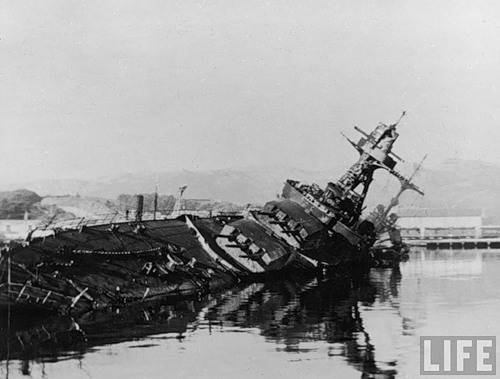 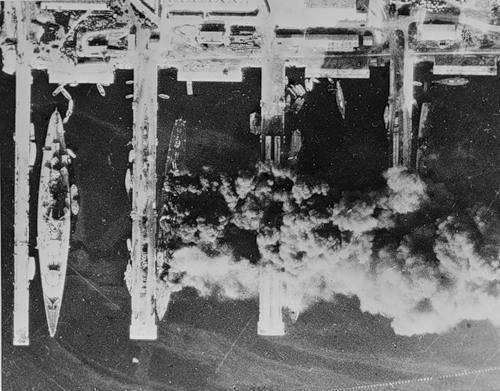 Burning and sunken French ships at the quay walls in Toulon. Picture taken from a British aircraft.
From left to right:
- line cruiser "Strasbourg" class "Dunkirk" - flooded by the crew, lay on the ground on an even keel.
- Suffren-class heavy cruiser "Colbert" - scuttled, despite the presence of German officers. Subsequently, it detonated the cellar.
- the Algeri heavy cruiser, built in the singular in response to the appearance of the Italian heavy cruisers of the Zara class, was blown up, and the 20 days were burning.
- light cruiser "La Marseillaise" class "La Galisson" - Kingston on the orders of the captain were opened by the crew on the one hand, the cruiser rolled over and exploded, burned 7 days. 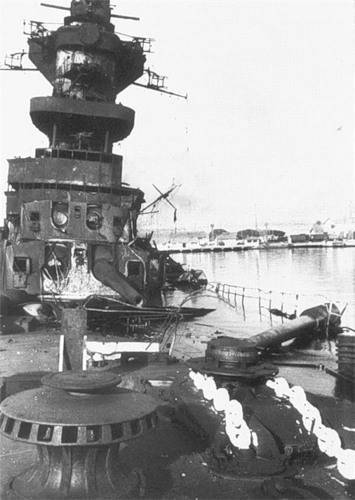 Nasal towers heavy cruiser "Algeria" after the end of the fire. 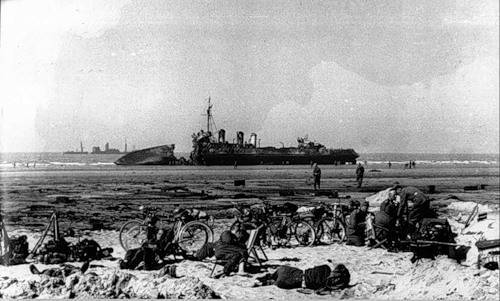 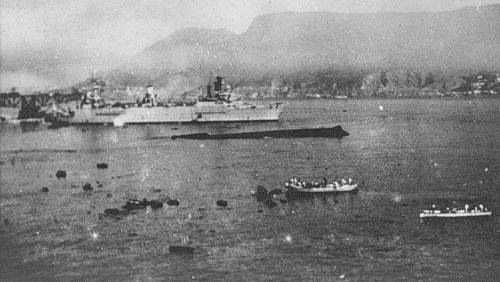 Operation "Catapult". 3 July 1940 of the year. Oran. The death of the battleship "Brittany". 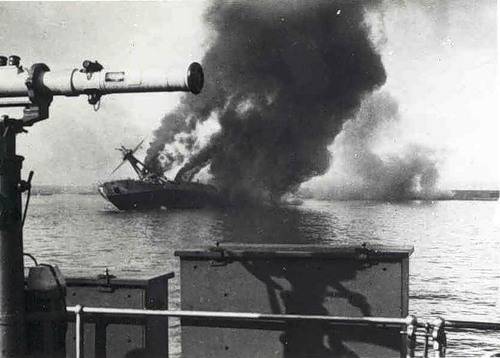 The battleship "Brittany" collapses to the side. 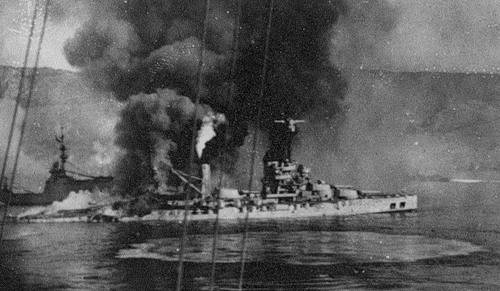 Fire at the stern of the battleship "Brittany". Well visible trim aft. 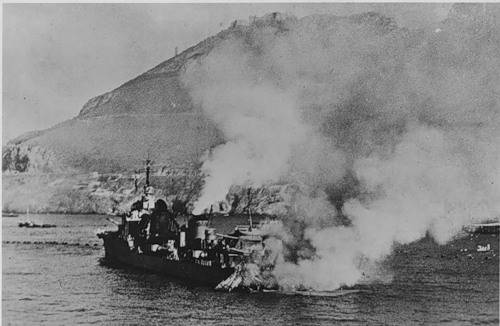 Destroyer "Mogador" leaving Mars El Kabir 3 July 1940 received a direct hit by the British 381-mm projectile in the stern, which led to the detonation of depth charges. The destroyer completely tore off the stern and he ran aground. 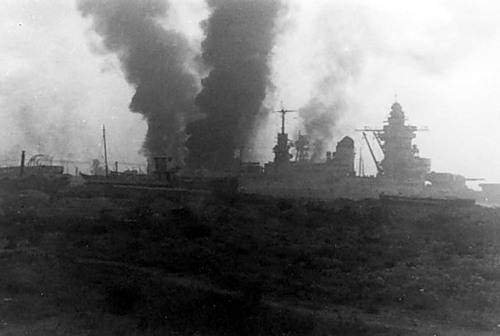 Burning battleship "Provence" in Mars al-Kabir. 3 July 1940 of the year. 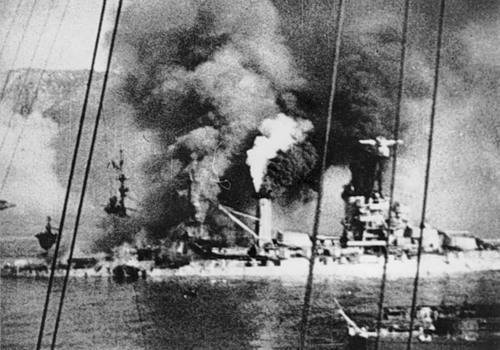 A strong fire is clearly visible in the vicinity of the aft superstructure of “Provence”.

Ctrl Enter
Noticed oshЫbku Highlight text and press. Ctrl + Enter
We are
22 June. Brest Fortress. Battle ReconstructionDiplomats of the People's Commissariat of Defense: on the eve and during the war