August 22 2013
9
The SAMP-T anti-aircraft missile system is designed to provide air defense of troops and mechanized formations on the march, as well as provide air defense of stationary objects of great importance from a massive air attack of a wide range of airborne targets. Starting from tactical cruise missiles, all types of aircraft and helicopters, as well as various UAVs in all weather conditions, day and night, when the enemy uses various types of interference. The creator of this air defense system is the European consortium “Eurosam”, formed in 1989 by the union of the companies “Aerospatiale”, “Alenia” and “Thompson-CSF”. Currently, the Eurosam consortium is an integrator of land and sea missile defense system development projects.


6 March 2013 of the year in the framework of the joint exercises of the French Air Force and Italian ground forces SAMP / T medium-range air defense system successfully hit a ballistic missile, the press service of the French Defense Ministry reported. The statement specifically noted that this was the first interception of a ballistic target within the framework of the functioning of the unified NATO missile defense system in Europe. It is reported that the knocked down ballistic missile overcame about 300 km before, before it was destroyed by the Aster 30 antimissile.

The launch of the antimissile missile as part of the test of the missile defense system was carried out on the territory of the DGA missile test center in Biskaross in southwest France with the participation of the 4 artillery regiment of the Italian army and the test center of the French Air Force. Previous missile tests were conducted in October 2010 and in January 2011. 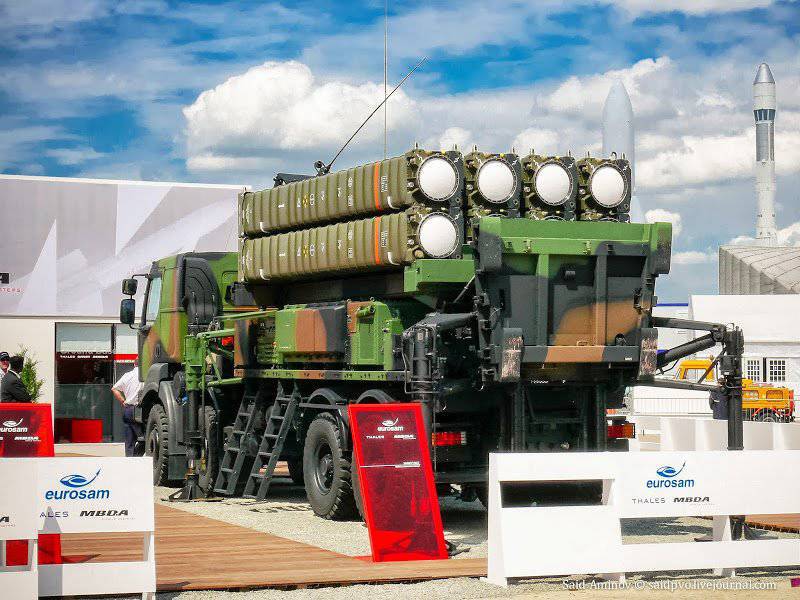 The SAMP / T SAM system (in the French Air Force, it has the designation “Mamba”) is able to conduct circular shooting at 360 degrees, has a modular design and highly maneuverable missiles that are able to destroy any air target. This complex is already in service in France and Italy and is an important contribution of these two states to the formation of a unified NATO missile defense system, which is designed to intercept ballistic missiles in Europe. The SAMP-T anti-aircraft complex has a high rate of fire and minimal reaction time (8 missiles can be launched in just 10 seconds), while the complex is able to simultaneously accompany various targets to 10 and is controlled by a crew of just 2 people.

According to the developers, this air defense system is highly effective against a variety of unobtrusive, highly mobile, broad-range targets. After receiving target designation, a vertical launch of anti-aircraft missiles takes place. Each launcher of the complex includes a launcher module with eight TPK. In the middle segment of the ZS flight, its aiming at the target is carried out inertially according to information that comes from the multifunctional radar. At the final part of the flight, targeting takes place with the help of a missile defense coordinator with an active radar homing head (GOS), which ensures the use of missiles in all weather conditions. 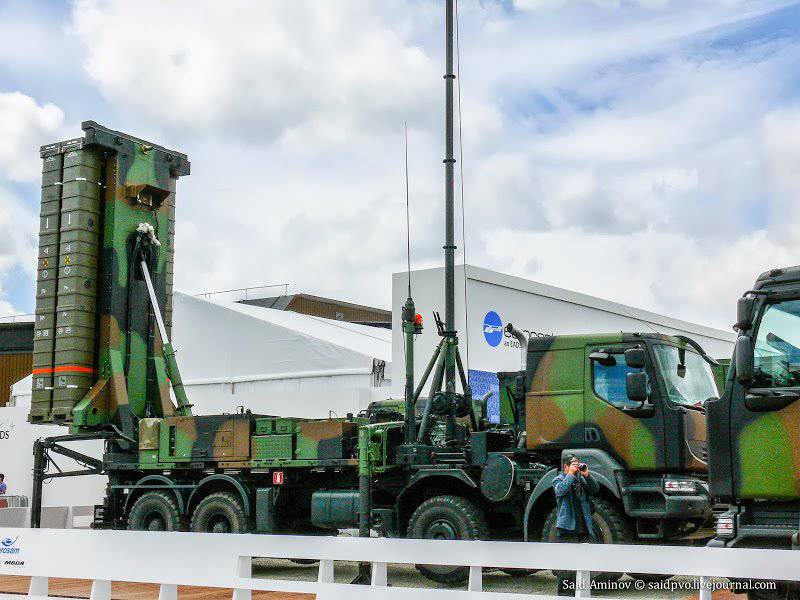 • multi-function radar of the Thompson-CSF ARABEL type, equipped with a phased antenna array (PAIR);
• the command and control cabin - FCU (Fire Control Unit), which contains the necessary equipment of the control system, which processes all information about the air situation in real time, as well as the 2 console of the display system;
• SAM "Aster-30";
• self-propelled vertical-start PUs on the Renault-TRM-10000 automobile chassis (8х8 wheel formula) or Astra / Iveco with launch modules on 8 combat missiles placed in transport and launch containers (TPK).

The Aster-30 anti-aircraft guided missile is a two-stage solid-fuel rocket, which is designed according to the normal aerodynamic configuration. In the initial and middle sections of the flight path to the target, the rocket receives commands from the ground (command-inertial guidance system), and in the final segment of the path, an active HOS enters. Installed on the rocket radar homing works in the frequency range from 10 to 20 GHz. A distinctive feature of this anti-aircraft missile is the presence of its high-precision PIF / PAF combined control system, which uses gas jet nozzles and aerodynamic control surfaces. In this case, gas jet nozzles are close to the center of mass of the missiles and create thrust along the normal to the rocket flight path. The control method implemented on the Aster-30 rocket allows to compensate for pointing errors and increases the maneuverability of the rocket in the final part of its flight. The Aster-30 missile is equipped with a high-explosive fragmentation warhead of directional action, as well as a radio fuse.

The ARABEL multifunctional three-coordinate radar, equipped with a passive phased array, is able to detect, detect and simultaneously track up to 130 various air targets, as well as guiding missiles to 10 from these targets. To review the airspace in the radar, the mechanical rotation of the antenna in azimuth at an average speed of 60 r / min (1 r / s) and electronic scanning of the air space in elevation are used. Characteristic features of this radar are: control of the shape of the radiation pattern and the directivity characteristics of the antenna; adjustment of the operating frequency from pulse to pulse and adaptive change of signal parameters; very good accuracy and energy characteristics, as well as the possibility of issuing information in real time; programmed space overview. 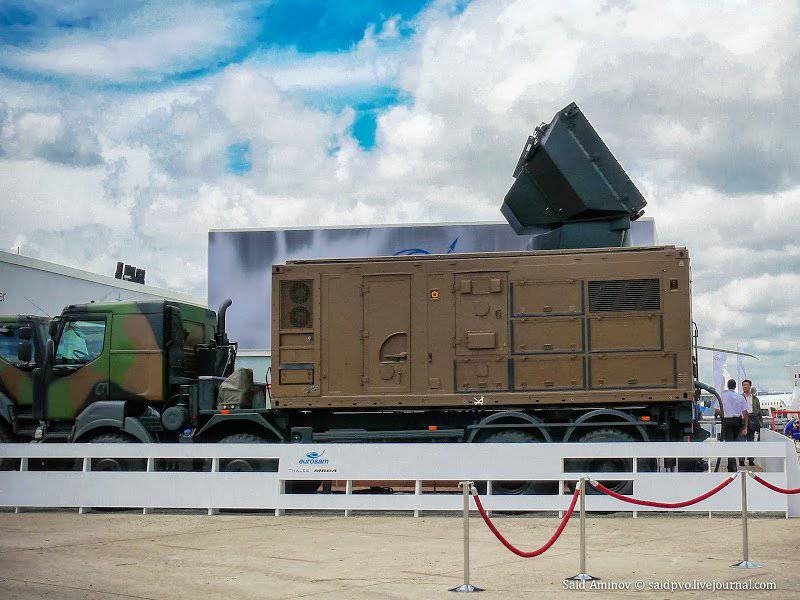 The implementation of all the capabilities of the ARABEL radar is achieved through the powerful computing facilities of the SAMP-T complex. The radar is able to view the azimuthal space around and from -5 ° to + 90 ° in elevation during one turn of the antenna. The dimensions of the electron beam are 2 °. The detection range of tactical ballistic missile (TBR) class air targets is up to 600 km. The ARABEL radar can also be additionally included a system of state recognition (IFF / NIS), which either integrates with the radar or receives its own path for receiving and emitting a signal.

A typical battery of the Franco-Italian SAM SAM-T system consists of 6 PUs, separated by a distance of 10 km. from the control cabin, as well as multifunctional radar ARABEL. The functioning of all subsystems of the complex is carried out under the strict guidance of the 2 members of the crew. The SAMP-T air defense system is able to act independently, as part of an integrated air defense system, or with receiving target indications from early warning radar and target tracking. There is also the possibility of integrating other optoelectronic reconnaissance facilities into the complex.

Each battery of the complex can simultaneously guide the 16 SAM to various air targets. Information on the number of combat-ready and missiles deployed by a complex on each launcher is used during combat work in appointing new missiles to attack newly discovered air targets. At the same time SAMP-T SAM system has a high rate of fire and minimal reaction time, 8 missiles with one launcher can be launched in just 10 seconds. 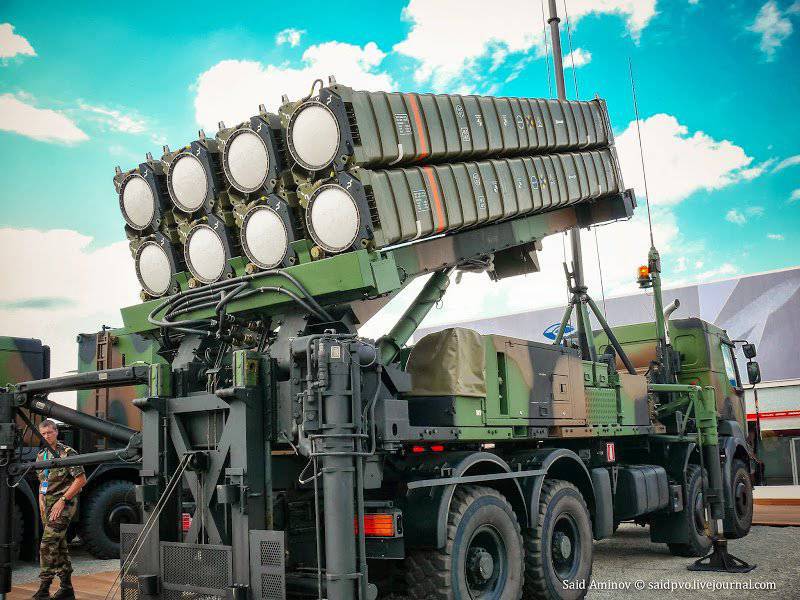 Scheme of the complex

Under normal conditions, the combat operation of SAMP-T SAMs is carried out as follows. After the announcement of the alarm, the operators of the combat control cabin of the complex bring all its elements into a combat position, ensuring also their uninterrupted power supply. The antenna of the multifunctional ARABEL RLS rotates at a speed of 1 v / s, thus providing a circular view of the airspace in the azimuth plane. In cases of the need for multi-functional radar, sectors of responsibility may be established that will have priority in detecting and firing air targets.

In specified sectors, airborne targets are detected and identified by the antenna's 1 antenna revolution using additional sensing of the portion of space where primary target detection was noted. If, in the case of re-sensing, confirmation of the detection of an air target is noted, then the next turn of the radar antenna causes the linkage of its route. Further, information about the route of the target is transmitted to the command and control cabin and displayed on the displays of the complex operators.

Computational facilities of the complex build a prolongation of the future mark of the appearance of the target, taking into account the intended course of its movement, speed of movement and its nature. Each detected target is assigned its own individual number. At that moment, when the target enters the launch area of ​​the SAMP-T complex, the combat control cabin issues commands to the selected launchers. After receiving these commands, preparations are made for the launch of the 1 or 2-X SAM "Aster-30". 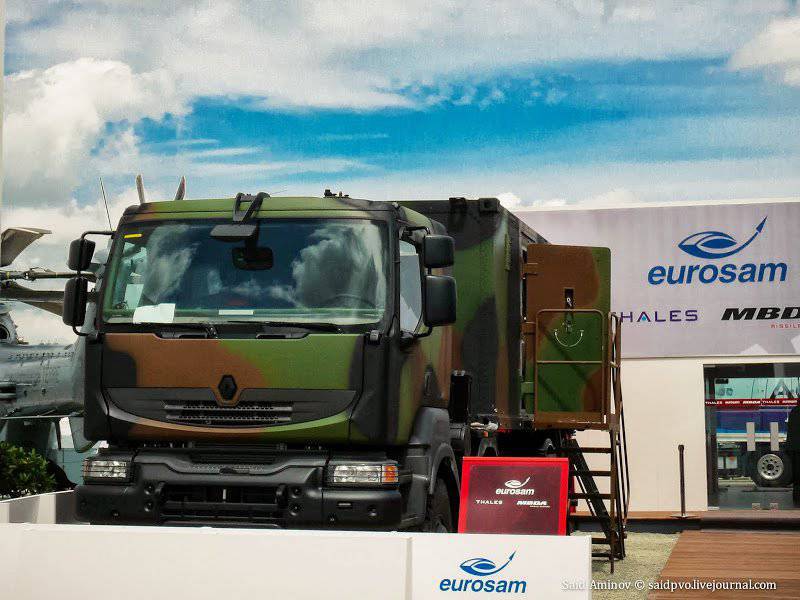 After this, the command post issues commands to launch missiles. At the PU, after receiving the appropriate command, information on the direction and other important parameters of the movement of the air target, as well as the value of the declination angle of the missile defense system during its vertical launch, is transmitted to the ZUR board. At the same time, training is being carried out to capture the escort of anti-aircraft missiles. After this, a vertical launch of the Zour missile takes place, the rocket leaves its TPK. The modes of operation of the multi-function radar with the HEADLIGHTS allow detecting and capturing the launch of the Aster-30 SAM system, and then using the computational tools of the complex, the route of its flight is formed. After the SAM exits the transport and launch container, it independently leans in the direction of the intended meeting point with the air target.

At the command and control center of the complex, the rocket flight path is displayed on the displays. The coordinates of the selected air target, as well as other parameters of its movement, are updated every second and are issued onboard the missile defense system to guide it to the intended meeting point with the target. After the rocket accelerator stops its work with a small time delay, the main engine starts.

The flight trajectory of the missile defense system is compiled in such a way that its convergence with the aim of allowing a target to be captured by a missile launch vehicle that starts operating at a certain point on the flight path. After completion of the main engine Zur continues its flight to the target. To control the flight, wings and rudders are used; if necessary, a PIF guidance system is used in the final section of the flight path in order to minimize the possibility of a miss and cause maximum damage to the air target.