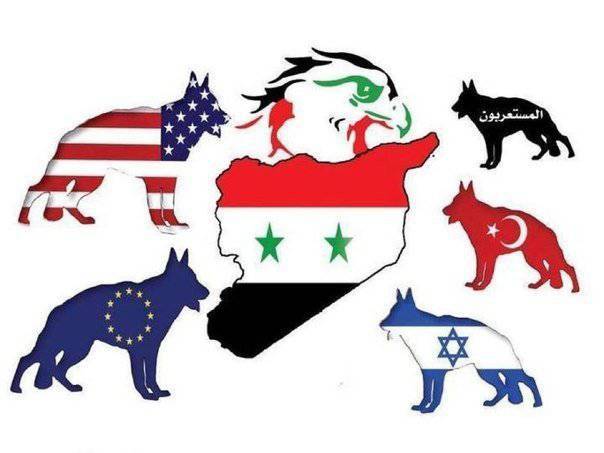 The sad tradition continues - as soon as important international decisions are made concerning Syria, the terrorists and their accomplices in the West and in the Gulf countries are preparing any provocation. Or real, or informational. And it is still happiness, when only informational.
So, a UN commission to investigate the use of a chemical agent arrived in Damascus. weapons. Its members will travel to the Khan Al-Asal district of Aleppo Province to deal with the 19 incident of March this year, when militants used a handicraft rocket with a chemical warhead against servicemen and civilians, resulting in dozens of people killed and many injured.

But the so-called "oppositionists", and even more so - those parties that provided all kinds of support to the bandits, financed, armed and covered them - the investigation is unprofitable. After all, this would mean complicity in a war crime, the responsibility for which should be shared by all its customers and performers.

And on the morning of 21 August, an informational stuffing was born on Twitter on the Al-Arabiya TV channel, immediately picked up by the rest of the Arab (or, more precisely, anti-Arab) and Western media: allegedly as a result of the use of chemical weapons by the Syrian army in the eastern suburbs of the province of Damascus - Ain Terme, Jobar and Zamalke - died ... But then - the death toll varies. They say that the victims 213, then - 1188. For a while, the media stopped at the average value, reporting 635 dead, but then it seemed a little, and began to say that there are more than 800. Where do these numbers come from - Al-Arabia and all other media that have picked up stuffing are silent. It must be from the ceiling in the office of the editor-in-chief of one of the most deceptive Arab TV channels, which has already repeatedly discredited itself - first when covering the situation in Libya, and now in Syria.
In general, the Syrian government is trying to blame for the complete absence of any logic and political wisdom. It turns out that it was specially during the stay in the country of the UN commission to investigate the use of chemical weapons - it took and allegedly used these very weapons! It remains only to add that the commission was lined up and made it right before her eyes!

It would be logical to assume that if so many people died, there would be even more victims, and ambulances would drive around Damascus. But nothing like this is observed in the city.

As stated by the Ministry of Information of Syria, such reports have nothing to do with the truth. They are aimed at undermining the activities of UN experts who arrived in Syria to study the facts of the use of toxic substances in the Khan Al-Asal region of Aleppo Province. A similar statement was made by the High Command of the Army and the Armed Forces and the Ministry of Foreign Affairs of Syria.

It turns out that the authors of the information provocation are trying to distract the commission from the investigation, for the sake of which they arrived, and to send experts on a deliberately false path. They seek to gain time, and then come up with something else in the Khan Al-Asal area.

In July of this year, they have already “invented”. Hundreds of people were killed in the attack launched on July 22 against this ill-fated region. The death toll is still unknown. Prisoners of military servicemen were shot, many witnesses were killed during the 19 of March. At the hands of gangsters were lists of these people.

But, apparently, not all the witnesses have been cut out yet. And now, perhaps, they want to finish off the rest. These people are now in danger, since it is not by chance that the forces hostile to Syria are trying to delay the start of the investigation in the province of Aleppo.

And now the League of Arab States, on the basis of the false reports of the TV channel that has repeatedly lied, as if by request, makes a statement that the commission, instead of the province of Aleppo, should immediately visit the suburbs of Damascus.

Britain is also not lagging behind - one of the main customers of the anti-Syrian campaign. She calls on the UN Security Council to immediately convene an urgent meeting on this issue. In addition, the authorities of this country also require that the experts go not to Khan Al-Asal, but under Damascus
All this is reminiscent of a situation where last year a provocation was carried out in the village of Al-Khul in the province of Homs to disrupt Kofi Annan’s plan. The terrorists, having killed hundreds of people, blamed the government for what happened - and right there the Arab League and many Western countries began to call for an emergency meeting of the UN Security Council. When the investigation was carried out that established the guilt of the militants, they immediately tried to “silence” this question.

Where were the authorities of Britain, where was the Arab League when the July massacre in Khan al-Asal happened? When are the wards, including Haig and Cameron, the bandits brutally massacred civilians and captured military personnel? Already one such execution of prisoners is a grave war crime, demanding that terrorists and their accomplices be brought to international court.

Where were the British authorities, where were the media who are now trying to blame the Syrian government, when the monstrous criminals from a terrorist organization called the Islamic State of Iraq and the Levant massacred residents of Kurdish villages near the city of Tel Abyad on the Syrian-Turkish border? They were silent in a rag from a faded British flag.

Where was Cameron, where were the leaders of the Arab League when, as a result of the attack by militants in the north of the province of Latakia, a truly fascist massacre was made of the inhabitants only for their religion, and the gangsters boasted that they had killed many “Alawite infidels”? Now, when the army liberates these villages, mass graves of people are found in them, on whose bodies there are traces of brutal torture. 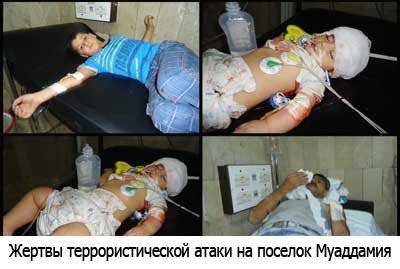 And behind the ringing of an empty information barrel, which rolls through all the media, the moans of real victims are not audible. And at this very time, terrorists fired mortar shells at residential areas of the city of Muaddamia in the same Damascus province. 11 people injured, seven of them children, including infants. And the 9-month-old boy is in critical condition. But this is another crime of “oppositionists” who do not care about loudly screaming “defenders of human rights”.

On the eve, three districts of Damascus — Abbassiin, Zablatani, and Al-Kassa — were shot at with mortars. 8 people suffered, some of whom are in critical condition. But, apparently, this is “not the same scale” (although the massacre of Kurds near Tel-Abyad for those who claimed the right to broadcast on behalf of the world community was also “not that scale”).

But they are trying to inflate a new provocation against the Syrian government and thwart the investigation of a crime against peaceful Syrians, for which all of them - both terrorists and patrons - are inevitably waiting for retribution, the same as their predecessors, the Hitlerites.

Ctrl Enter
Noticed oshЫbku Highlight text and press. Ctrl + Enter
We are
Situational analysis of the death of the MH17 flight (Malaysian Boeing 777), made on the basis of engineering analysis from 15.08.2014Fascists under the auspices of the West
Military Reviewin Yandex News
Military Reviewin Google News
47 comments
Information
Dear reader, to leave comments on the publication, you must to register.