Sabotage on the East 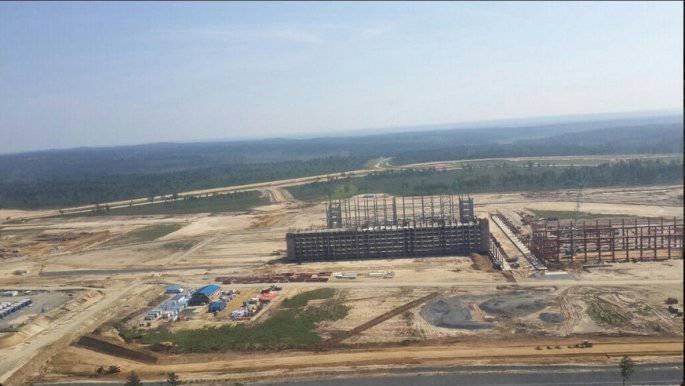 21 August 2013 of the year. Uglegorsk. Amur region. The construction site of the Vostochny cosmodrome. Dmitry Rogozin (Deputy Prime Minister of the Russian Federation):
Two assignments were given. The first is to ensure the development of a methodology for determining the cost of construction of facilities at the Vostochny cosmodrome, taking into account the proposal of Roskosmos and Spetsstroy of Russia, the period is July 30. Secondly, Spetsstroy of Russia and Roskosmos needed to determine together with the Ministry of Regional Development of Russia the necessary indicators for making calculations for the work performed in the 2012 year, taking into account the actual data on construction costs. The orders are not fulfilled.

Further Rogozin is already indignant:
Any deviation from the plan I will consider as sabotage. I am not going to classify myself as those civil servants who will tolerate non-execution of instructions. I want to hear the reasons why such problems arise, and a proposal on how to ensure the loading of all construction works at all stages with the necessary number of specialists. Any breakdown will be perceived as negligence, it is a strategically important object for the country.

What a word - “sabotage”. Long time in our country, federal officials did not use such terms ... But now it’s not about the use of reinforced concrete terms, but how differently the head of Roscosmos Popovkin and Deputy Prime Minister Rogozin see the same situation. If everything goes according to plan for Vladimir Popovkin, then Dmitry Rogozin has vague doubts about this very plan ...

If federal officials cannot work out a common opinion on the implementation of a single project, then what can we say about those who are involved in the direct construction of the cosmodrome.

It is worth recalling that the idea of ​​building a cosmodrome in the Amur region arose against the background of the material claims that the Kazakh side presented to the Russian side in relation to the rental of Baikonur. At one time (2010-2011 year), representatives of the Space Policy Institute stated that often the requirements of Kazakhstan cannot be called rational and fair, and therefore, they say, it would be nice to have our own platform for relatively cheap launch of spacecraft. For the construction of this site, the point of the Amur region was chosen, located near Uglegorsk.

The cost of building a new Roscosmos facility by the State Duma was approved in the following way: from 2012 to 2014 years 46 billion rubles, and the state was going to allocate about 60% of this amount in 2014 year. And on 2015, the year is already scheduled for the first launch from the Eastern launch vehicle.

Over time, expenditure items were adjusted, and estimates were added for the construction of infrastructure (communications, staff housing, railways and highways, and various engineering services). As a result, the sum of almost a billion rubles 82 was requested from the state budget by Roscosmos.

However, as it turned out, this figure of budget financing was not final. At the end of 2011, the then director of the Russian Federal Agency for Special Construction, Mr. Naginsky, said that building an Eastern state would cost no less than 300 billion rubles. At the same time, Naginsky added that the lion's share of this amount will go to the construction of a whole city on 40 thousand people.

In general, the construction began. No one has yet canceled plans for the first launch in 2015, and after visiting the construction site, Vladimir Popovkin, many decided that things were going well, and everything would be completed by the 2015 year.
However, since the head of Roscosmos has visited the construction site in the Amur Region more than four months have passed, and only now it turns out that serious problems have arisen during the construction. These problems are rather sharp and were outlined by Deputy Prime Minister Rogozin. It turns out that, although the construction seems to be proceeding as it is, but so far the state structures have not been able to properly explain how exactly a penny to the budget will cost the construction of each of the cosmodrome objects. Moreover, they still cannot count how much to pay the builders for the work already done by them. And if the completed work actually remains unpaid, then no one is eager to start new ones. Instead, officials of the Ministry of Regional Development, Roskosmos and Spetsstroy sit in their offices and continue to do a good face on a bad game, saying that construction is going according to plan. Of course, it goes, that's just on someone else's plan? ..

It turns out that if it were not for the Amur floods, which have already managed to inflict billions of dollars in losses to the region, then the state of affairs on the East construction site would hardly have bothered at all in the near future ... By the way, about floods. The same commission that is currently working at Vostochny concluded that there is no threat of flooding the territory of the cosmodrome under construction. In this regard, the question arises: is there any possibility of flooding this area? If there is, then it was not risky to start construction here. Hopefully, the answer to this question is well known both in Spetsstroy and in Roskosmos, because if the Amur flood had also washed off the cosmodrome under construction, in which billions of rubles had already been invested, then the great human tragedy in the Far East would have been added to revealed negligence when designing a strategically important object.

In general, I do not want to run ahead, but for some reason the thought arises that the "saboteurs" will not be defined. Well, unless, any driver of the cement truck, "broke all plans". But not officials from Spetsstroy and Roskosmos, in the end, to call those guilty ...

Ctrl Enter
Noticed oshЫbku Highlight text and press. Ctrl + Enter
We are
The head of Roscosmos explained the delay in the construction of the Vostochny cosmodromeRogozin visited Nizhny Tagil, shot from a tank and a gun
Military Reviewin Yandex News
Military Reviewin Google News
98 comments
Information
Dear reader, to leave comments on the publication, you must to register.