"Penguin" reached the Pole of inaccessibility. Unique polar all-terrain vehicle based on the BTR-50P

August 22 2013
14
55 years ago, an all-terrain vehicle, officially named “Penguin”, was created at the Kirov Plant. It was developed in the design bureau of the plant (now Spetsmash OJSC), which was led by an outstanding designer tanks Joseph Yakovlevich Kotin. 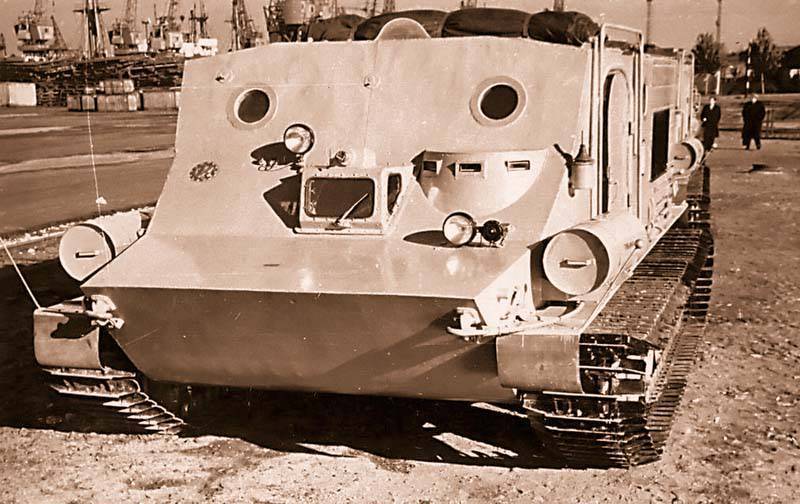 In 1957, the design bureau of the Kirov Plant, it was then called OKBT, was a famous polar explorer, corresponding member of the USSR Academy of Sciences, M. Somov.

The fact is that the polar explorers urgently needed a powerful all-terrain vehicle for a comprehensive study of Antarctica. Somov told Kotin about the prospects that had opened up to the researchers of a distant and mysterious continent, and managed to captivate the chief designer with the idea of ​​creating a mobile all-terrain laboratory for polar explorers, and Joseph Yakovlevich enthusiastically took up a completely new matter for him.

Extreme conditions of operation in unprecedented low temperatures, unimpeded movement of loose snow and smooth ice required new approaches to the design of the machine.

Somov often visited the chief designer, they came together and became friends, without losing touch with each other until the end of life.

The Antarctic all-terrain vehicle received the official name "Penguin" and the factory code - "209 object". Given the extremely tight development timeframes and the requirement for high reliability of the new machine, design solutions that were tested and tested by practice were required. As a base, we chose a floating tank PT-76 and an armored personnel carrier BTR-50P, previously developed by the design bureau, which have proven themselves well in the armed forces when operating in the Arctic.

For this, along with the creation of reliable logging for the work of researchers, special astronavigation instruments and serious modifications of the chassis and running gear were required. A new caterpillar was developed with an unusually low specific ground pressure of less than 300 g / cm. With the weight of "Penguin" almost 16 tons, this figure was commensurate with the specific pressure on human soil.

Recalling the great urgency of this work, N. Kurin. - while the deputy. the chief designer wrote: “It was in the spring, somewhere in the middle of May, and another expedition had to sail no later than October, in time for the summer season, starting there in December ...”.

Considering the time limits for making the Penguin party (the image of a penguin appeared on board the car), which should have been prepared by the time the Antarctic expedition departed, Kotin made an extraordinary decision: from the very beginning of the assembly he attached to each of the five machines he created responsible for the operational solution of problems arising during the assembly. As such "nannies" he appointed initiative young designers - recent university graduates. Among them were Popov N.S. - subsequently the general designer; Strahal A.I. - the future chief designer of the project; and also already experienced tank builders of the Kotinsky Guard - MS Passas, I. Gelman, N. Kurin; young engineers Sharapanovsky BM and Tkachenko Yu.D.

... According to the conclusion of polar explorers, the Penguin proved to be a very convenient machine for route studies. It differed by a number of advantages, and the main thing - high reliability in work. The cross-country vehicle confidently overcame the 1,5 m height. The researchers liked the engine, which provided towing the sled with a load of 12 tons, and the work under reduced atmospheric pressure characteristic of the Antarctic. The advantage of the machine is good living conditions, which allow working in the wheelhouse without outerwear, with an outdoor temperature of minus 50 ° C. Hit a power reserve - without refueling - 3,5 thousand. Km.

The first expedition to the central regions of Antarctica was led by the famous polar explorer Tolstikov E.I. 27 September 1958, a detachment of researchers, among whom were four Penguin all-terrain vehicles, took the route from Pionerskaya station. Two months later, after passing 2.100 km, the region of the sixth continent, the furthest from all points of the coast, was reached - where the polar station “Inaccessibility Pole” was organized. Among the researchers were employees of the Kotinsky Design Bureau Burkhanov GF, and later, already as part of the 5 Antarctic Expedition, the second envoy of the Kirov workers - design engineer Krasnikov B.A.

As a sign of respect to the creators of this car, two Penguin all-terrain vehicles were installed at the Mirny and Novo-Lazarevskaya stations for eternal parking. Member of the expedition, mechanic-driver NP Pugachev received a government award, and the chief designer Kotin Z.Ya. - Honorary badge "Honored polar explorer". 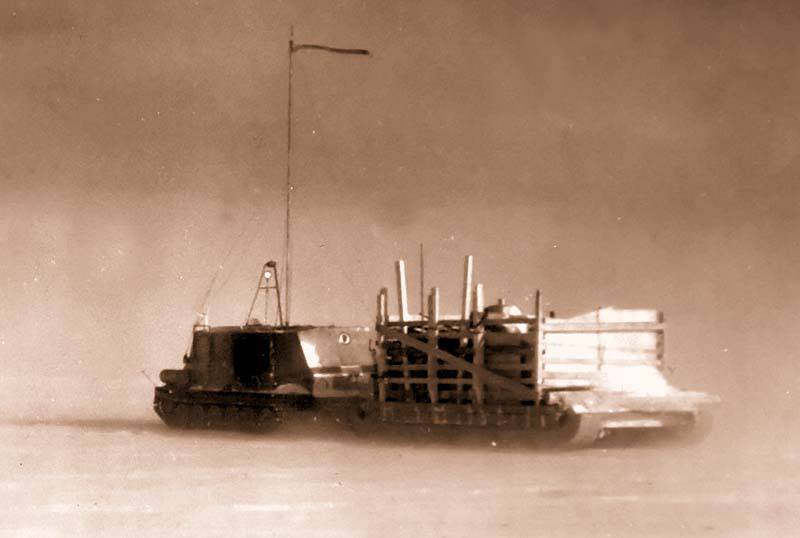 During the work of five Antarctic expeditions, more than ten trips into the interior of the continent were carried out using ground-based all-terrain vehicles, transported over 15 thousand tons, reached the Pole of Inaccessibility and the South Geographical Pole. Good "traces" remained in Antarctica from the tank crews of the design bureau of the Kirov factory.