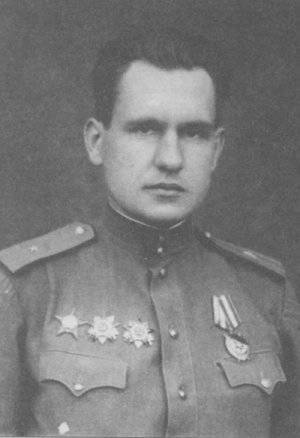 
Red Star readers have repeatedly met him on the pages of our newspaper: in their interviews, Leonid Georgievich told about the events of the Great Patriotic War, which he went through from the first to the last day, and most often in the battle formations of active troops.

A guy from a peasant family, he graduated from the Moscow School of the NKVD in 1940, served in the NKVD Office for the Chernivtsi region, and on June 21 1941 of the year ended up on the Soviet-German border. The next day, he, along with the border guards, participated in the battles, defending the outpost from the Nazis trying to break through ...

Returning a few days later to his office, Senior Lieutenant Ivanov wrote a report on the transfer to military counterintelligence, with which after that all his subsequent service was connected, as much as forty-five years.

Four years from them is a war. In his service record - the defense of Odessa, which Leonid Georgievich left among the last Soviet soldiers, the Kerch-Feodosiya landing operation and the defense of the Crimea, Stalingrad, the liberation of Rostov-on-Don and the Donbass, the liberation of Odessa - Ivanov went there, already in the rank of major, entered among the first. Today he was the only one who was the last to leave this “pearl by the sea” and who were the first to return there. Ahead there were still battles on the Kishinev direction, the liberation of Poland, the capture of Berlin ...

Here he modestly signed on the Reichstag: “L. Ivanov from Tambov ”, and then participated in the work to ensure the security of the procedure for signing the Act of surrender of the fascist troops. Here is such a combat biography of the veteran of the legendary Smersh. And in it - the revelations of enemy agents, the fight against bandits on the territory of Western Ukraine and Poland, the search for traitors and Hitlerite minions ... Many of these operations took place with shooting, with pursuits, with mortal risk.

Leonid Georgievich's service in the so-called “peacetime” (this is a very relative concept for military counterintelligence officers) was also not easy. So, in the fall of 1954, he was the senior security team for the famous exercises at the Totskoy test site. During a nuclear explosion, Colonel Ivanov was next to Marshal of the Soviet Union G.K. Zhukov and army general I.E. Petrov, and fifteen minutes after the explosion, drove with them to the epicenter.

At the end of the 1950s, he became head of the Special Department of the KGB in the Baltic Military District, then in the Southern Group of Forces, in the Kiev and Moscow Military Districts.

Service Leonid G. graduated in 1986 year, at the age of quite solid. However, it would be wrong to say that he "retired." Despite the age and consequences of front wounds, the veteran still occupies, as they say, an "active life position", participates in military-patriotic and veteran work, transfers his wealth of experience to young employees of military counterintelligence, is engaged in literary work. Major General Ivanov not only published in periodicals, but also wrote a very interesting book, The Truth About Smersh, which has already been reprinted twice.

To the attention of our readers, we offer an excerpt from the memoirs of Leonid Georgievich about his work as the head of the Special Department of the KGB in the Moscow military district. In the professional jargon of the military counterintelligence, it was simply called “the district chief.”

On behalf of the editors and readers of Red Star (including veterans and current employees of military counterintelligence), we congratulate Leonid Georgievich on his 95 anniversary, wish him good health, long life, success in work and continue to feel like a happy person!

A special department of the Moscow Military District is an unusual department. Firstly, he is considered to be the leader among other Special Districts of the districts, he should always look positive by the results of his work and set an example to others. He must be exemplary in all respects. Secondly, it is located in the capital, next to the highest state and government bodies. Thirdly, if something unusual happens in the country, it is immediately felt at the work of the District Special Department. Fourthly, the District Special Department conducted such events that are not provided for by any orders of the KGB.

I had a lot of trouble while working as the head of the Special Department of the KGB of the USSR in ensuring the security of military parades. To ensure safety in the preparation of parades, a man of officers 25 was allocated. It was necessary to check everything - so that there was no cartridge, projectile, intent, error.

With the commander of the Moscow Military District troops V.L. Govorov I had a great relationship, he helped me always and in everything. When I came to him, he even ran out from behind the table, hugged, thanked for the work. At his invitation, I twice climbed the Mausoleum during dress rehearsals for military parades at night. I can not describe the joyful, unusual feeling that covered me at the same time.

Many worries were associated with the funeral of prominent warlords. When I was in the CDSA, there were goodbyes to many of the commanders who had passed away, major scientists. During these events, I met all members of the Politburo there, and L.I. Brezhnev always presented. Since he remembered me from previous meetings, he sometimes asked one or two questions.

When AM Vasilevsky died, his wife in a conversation with Brezhnev asked: “What about the orders of Victory?” Vasilevsky, like Zhukov, had two. These orders are of very high value, and the commanding rewards after the death of their cavaliers were to be handed over to the state. Brezhnev, probably thinking already about himself more, ordered “to leave”. It was a precedent, and since then most of the precious awards remained in families.

On the eve of the farewell to Marshal Vasilevsky, the first deputy chairman of the KGB of the USSR GK called me. Tsinev:
- See that the Order of Victory is not stolen during the farewell. Everyone has 96 diamonds.

Fulfilling this instruction, I singled out an operative in civilian clothes, put him in a secluded place in the hall and instructed him to look at the Order of Victory without looking away.

After the end of the farewell with Vasilevsky, after midnight, Tsinev calls me again:

- Leonid Georgievich! Where is the Order of Victory Vasilevsky?
Reported that they are in the safe. Safe sealed. Put man.
- Did you check? - asks Tsinev.
- No, - I answer.
- Go and check.

I'm going at night in the CDSA, with the head of security I walk to the safe with the awards, open it, check the orders of Victory, and other numerous awards. Everything is in place.

About two o'clock in the morning I come to the department and call Tsinev, I report:

- Georgy Karpovich, everything is in order.
- Dobrenko, dobrenko - he answers.

This is what sometimes had to do the head of the Special Department. But this is not the main thing. The main thing was to conduct active counterintelligence work in the army, which we did.

George Karpovich Tsinev was a responsible and serious leader, experienced and knowledgeable, demanding of himself and his subordinates. Being already in very old age, he usually worked late. He did not tolerate and quickly identified loafers, irresponsible people, appreciably and quickly encouraged those who competently and accurately carried out their work.

In addition, the Special Department of the Moscow Military District carried out serious measures to recruit military representatives of foreign countries. Here we had some success. We managed to recruit a number of large, I would even say, very large foreign military, from which serious information began to come. In this regard, the chairman of the KGB Yu.V. Andropov issued an order in which I was thanked and I was awarded a valuable gift - a gun.

But for obvious reasons, it is not time to tell about very many of our counterintelligence operations today.

Ctrl Enter
Noticed oshЫbku Highlight text and press. Ctrl + Enter
We are
Diplomats of the People's Commissariat of Defense: on the eve and during the warToday 79 would be the first man who flew into space - Yuri Alekseevich Gagarin
Military Reviewin Yandex News
Military Reviewin Google News
1 comment
Information
Dear reader, to leave comments on the publication, you must to register.