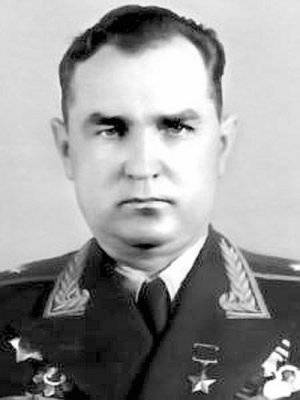 On August 17, a veteran of the Great Patriotic War, a talented pilot and famous military commander Hero of the Soviet Union, Colonel-General Viktor I. Davidkov would have turned 100 years.


Viktor Iosifovich was born on August 17, 1913 in the village of Vasilyevka, Zaporizhzhya region, in a working class family. After graduating from 7 classes of high school and factory school, he worked as a mechanic at the Zaporizhzhya aluminum plant. In 1935, Davidkov graduated from the Engels Military aviation school of pilots, after which he served as the commander of an air link as part of the 80th mixed air regiment, participated in battles with Japanese invaders near Lake Hassan and in the Soviet-Finnish War. During the Great Patriotic War he served in various fighter aviation regiments, in the command of the 8th Guards Fighter Aviation Division. He flew on airplanes I-16, LaGG-3, La-5 and La-7. On June 6, 1942, for courage and bravery shown in battles with enemies, Davidkov was awarded the title Hero of the Soviet Union. In addition, he was awarded two Orders of Lenin, four orders of the Battle Red Banner. Colonel General Davidkov - holder of the orders of Suvorov II degree, Kutuzov II degree, Alexander Nevsky, World War I degree, two orders of the Red Star, "For Service to the Homeland in the Armed Forces of the USSR" III degree and other awards.

By the beginning of World War II, Captain Davidkov was the deputy commander of the 131 th Fighter Aviation Regiment, who was armed with X-NUMX I-60 aircraft. It is noteworthy that in the first days of the war he took competent actions and saved the regiment from the strikes of German aircraft. When it became known about a possible attack on the USSR by Hitler's Germany, he just in case spread the squadron over field airfields and ordered to carefully disguise the aircraft.

Davidnkov already opened 24 on June 1941, when his regiment launched combat missions for reconnaissance and assault of the advanced units of the fascist invaders, forcing the Prut river, destroyed the enemy's fighters. On the way to Chisinau, our pilots found a column of vehicles with infantry. Davidkov took 6 airplanes to attack, while the four I-16s stayed at their height to cover the strike group. After the dive, the crews opened fire from all machine guns and immediately lit head cars. Then hit the tail of the column. On the same day, in one of the next sorties, the pilot shot down a Luftwaffe plane.

On July 23, the duty unit led by the commander of 131-iap, Lieutenant Colonel L. Goncharov, was attacked by two non-111 scouts. Goncharov shot down one plane, but he himself was wounded. The second enemy reconnaissance was shot down by Davidkov. As a result of the air battle, Potters was also wounded. Hospitalization of the commander was inevitable. The captain Viktor Davidkov became the regiment commander.

The former technician of the air regiment Viktor Sinaisky recalled:
- In July, 1941 was another breakthrough of the front. The Germans introduced the Romanian cavalry corps into it, and it was opposed by one of our infantry battalions, badly battered in battle. The front command requested assistance from the air force. Those instructed to act at your own risk. Davidkov sent intelligence. Flew Sigov. I returned, I remember, smiles, laughs. Davidkov asks: “What is it?” - “The Romanians are marching along with the orchestra. Dissolve the banner. - “What are they crazy?” - “I don't know. Marching on the bare steppe, we will show them! ”

“Davidkov drove 20 machines with weapons,” continued Victor Sinaisky. - Total 160 rockets! I came on a rammer, they hit the PC on the whole mass, and then they started shooting out with machine guns. When Davidkov returned, another group flew. For two days we drove this Romanian cavalry corps across the steppe. On the third day we flew over the Y-2. Then Lieutenant-General Korneyts arrived, built regiments and said: “You defeated the 5 Romanian royal cavalry corps. Breakthrough eliminated. Well done! "

From November 1941, after the death of Lieutenant Colonel Goncharov in aerial combat, Davidkov was appointed commander of the 131 th Fighter Regiment. Gradually, the entire front spread through the news of the military successes of the commander of the 131 th Fighter Aviation Regiment, Major Davidkov. On board his fighter shone thirteen stars - symbols of victory in air battles. Here is история the appearance of the last of them.

The group of fighters Davidkov accompanied our attack aircraft. In the vicinity of the target, the Germans opened hurricane anti-aircraft fire on the aircraft. Enemy fighters arrived to the aid of anti-aircraft gunners. Two Messers immediately rushed to the Ilyushins. The battle led by the regiment commander, pilot Nazarenko, boldly entered the battle. Davidkov himself led an air battle with another Me-109 pair. After a few minutes, two more Messerschmitts arrived. Now Major Davidkov fought alone against four. The skill of using weapons, courage and composure allowed the regiment commander not only to repel the attacks of the enemy, but also to strike at them himself. One of the "Messers" Davidkov shot down, and the three turned to flight. After completing the task, the group Il-2 and LaGG-3 returned safely to the airfield.

Davididkov rightly appreciated the technical composition: he did not leave him to fend for himself during the retreats at the beginning of the war and, accordingly, the regiment's redeployment. So, he personally covered the 30 technicians who traveled by car across the front line to the location of their troops.

Since July, 1943, after studying at the academy, Viktor Davidkov commanded the 32 Guards Fighter Aviation Regiment. According to the memoirs of fellow soldiers, the talent of a military pilot and commander was especially vividly revealed in Viktor Iosifovich in the Battle of Kursk. Already on the first day of the battle, the aces of Davidkov, led by their commander, shot down the enemy's 76 aircraft, and this despite the fact that not long before that, the still untrained pilots had entered the regiments of the aviation division. Davidkov skillfully organized their training.

“We assigned young people to experienced aces. In war, combat experience comes with each departure, with each battle ... The “old men” were holding back the new ones, who were rushing to fight, were protected from the fascist aces, taught according to the principle “Do as I am”. And the young pilots quickly got up "on the wing", became the leading pairs, links. This is the main thing that brought victory in the struggle for air supremacy. It remained with us from the Kursk Battle to Berlin itself. The union of youth and experience helped us utterly smash the vaunted Hitlerite Luftwaffe, ”Viktor Iosifovich recalled later.

Davidkov ended the war, commanding the 8 of the Kiev Red Banner Guards Fighter, the Orders of Suvorov and Bogdan of the Khmelnitsky Aviation Division on the Ukrainian front.

As part of the Southern, Bryansk, 1 of the Ukrainian fronts, Davidkov made 434 combat sorties, 50 personally shot down air battles in 21 and in the group - 2 of the enemy's aircraft.

Here is what the retired aviation lieutenant-general S.N. Romazanov:
“In the air battles, a combination of Colonel Davidkov's fighters distinguished from Belgorod to Berlin. This unit was the pride of our army, such glorious air fighters as MS were brought up in it. Tokarev, A.G. Pavlov, A.S. Kumanichkin, A.V. Lobanov, V.P. Shlepov, K.A. Novikov, D.P. Nazarenko, V.I. Borodachev, I.I. Semenyuk, P.M. Nikonorov and many, many others. An example for all was the division commander, Colonel Viktor Davidkov. I knew him as a man of great heart and great courage. There was nothing extraordinary in him: moderately hot and moderately calm, not eloquent. On his face one could always read his thoughts and moods. As a soldier, he was simple and honest, for this he was deeply loved and respected by his subordinates. ”

After the end of the war, Viktor Iosifovich served for a long time in aviation, himself flew a lot. He was awarded the honorary title "Honored Military Pilot of the USSR."

In 1951, he graduated from the Military Academy of the General Staff. He commanded 37 and 76 th air armies, was the first deputy commander of long-range aviation, deputy head of the Air Force Academy for educational and scientific work. He made his last sorties on the MiG-21, while on a business trip to Cuba.

In 1977, Colonel-General Davidkov resigned. But being on a well-deserved rest, he continued to work tirelessly on the military-patriotic education of the youth, passing on his combat experience to the cadets and students of military universities. 2 July, 2001, he is gone. The main business of his life was loyal, honest service to the motherland.