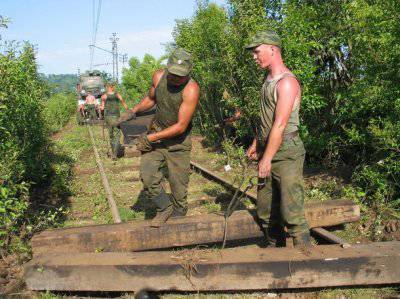 The priorities of the Russian military construction today are the construction of structures that correspond to modern technologies, which would fit within the designated time frame and would not require extra costs. Today, engineering troops are engaged in military construction, which, as it has been, is often referred to as a “construction battalion”.
Modern engineering troops include several areas. These are pontoon, road, engineering, and other areas that carry out their activities for the construction of various objects. Such objects include temporary ferries, buildings for practicing the actions of other types of troops, training grounds and much more.
Some time ago, engineering troops (mainly in the USSR) took an active part in the construction of housing for military personnel. Until now, military camps have remained in various cities of the country, which were built by soldiers of construction battalions, who were gathered literally from all the republics of the Union. Typically, these towns consist of the so-called Brezhnev five-story building, which was assembled like a designer from separate panels produced in concrete products plants. If today the territory of military camps can be fenced fences of corrugated boardwhich is rather easily erected, concrete used to be the main material for creating the fence. Concrete slabs as a kind of hedge for military facilities for various purposes can be seen today. To increase the security of the object, such plates are fitted on top with additional sections in which you can stretch barbed wire.
Engineering troops - not the notion of modernity. In any of the ancient armies existed their units, which performed the task of building ferries over water barriers, building siege towers and other activities related to military construction. The only difference could be that these actions were carried out by the same soldiers who were supposed to participate in further combat, that is, the unit of the military builders could not be separated from the army on a permanent basis. In the Roman army at a certain stage of its existence, military construction work was performed by slaves. They were engaged in the construction of defensive ramparts on the borders of the empire, so that the troops of Rome had an advantage over the enemy trying to penetrate their territory.
Ctrl Enter
Noticed a mistake Highlight text and press. Ctrl + Enter
We are
Theory and practice of engineering operationsContinuous earth-moving machines of the engineering troops of the USSR
4 comments
Information
Dear reader, to leave comments on the publication, you must to register.