Whose are you, flamethrower? 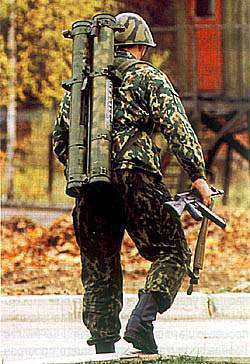 The use of flamethrowers, as the experience of the war in Chechnya and the almost forgotten Afghan war shows, raises a lot of questions. In particular, some provisions of the current combat regulations and manuals should be corrected, since the contradictory content of individual articles, to put it mildly, does not contribute to the achievement of the desired results in modern combat. There is a need to have another organizational basis of flame-throwing units, to deal with the tactics of their actions, to improve weapons and technical equipment. About how to approach this complex tangle of problems, argues the senior teacher of the tactics department of the Tambov Higher Military Command School of Chemical Protection, Colonel Igor Boyko.


Since the times of the Great Patriotic War, it has been carried out that flamethrowers operate directly in combat formations then rifle, and now motorized rifle subunits. The principle itself is correct, but in the present conditions it should nevertheless be more focused on the qualitative changes that have undergone a combined arms battle in recent years.

First of all, it is necessary to deal with the classification of typical targets for flamethrowing. They are divided by location (there are only ground, and why are there no others?), Degrees of protection (open, covered and armored), size (point, linear, area), nature of the activity (mobile, slow-moving and stationary) and, finally, in composition (single and group). It seems to me that it is cumbersome and confusing. Flamethrower such details to anything. Indeed, in these cases, he always uses the flamethrower in the same way, and then with one prerequisite: I see the target - I shoot.

Such information, if necessary, is only necessary for the general military commander so that he can determine where the application of this weaponswhich has recently become a powerful means of close combat, not of a special, but of a general purpose, is most effective. For example, in manpower, sheltered in field structures (bunkers or trenches) and buildings; on firing points (calculations machine gun, RPG, ATGM). Targets can be both pre-planned, and revealed in the depth of the enemy defenses. Other particular tasks are not excluded: distraction of attention, creation of hotbeds of fire, setting up a light landmark during the night by burning a highly inflammable object, etc.

Or see how the governing documents require the use of a flamethrower platoon, for example, in the offensive of a motorized rifle battalion. He is instructed to follow the line of advancing armored vehicles, no closer than 1 - 1,5 km, in units in cars. When the target appears, flamethrowers are called ahead, where they receive the task from the battalion commander, often through a messenger. It seems to be all right, but in fact difficult.

If the moto-rifle combat equipment “pulls” almost 25 kg (including a steel helmet - 2,5 kg, body armor - 12 kg, weapons and ammunition - 5 kg, personal protective equipment - 5 kg), then the flamethrower burden - due to the flamethrower pack in two times harder. Agree: you will not overclock with such a load. Even a trained person will need 20-30 mines to move forward. It is no longer necessary to speak about shooting accuracy, since the soldier is pretty tired. Yes, and they can kill him during rushes: the target is something noticeable! But the most annoying - during this time, the need for a flamethrower shot may disappear.

The proposal here is simple: the place for flame-throwing units to be determined no further than 200-300 m behind the attacking companies of the first echelon, as well as the grenade launcher. Thus, we will significantly reduce the time costs, and the rate of advance of the motorized rifle subunit will not be strayed by the seemingly “sluggishness” of flamethrowers.

There is something to think about in a defensive battle. Here, flamethrowers, as a rule, are assigned in pairs to the most dangerous areas. Although it is difficult to say whether they are great benefit. Shooting for manpower in a chain of jet flamethrower is like sparrows. Judging by the calculations, at best, one or two enemy soldiers will fall into the affected area of ​​thermobaric ammunition. And why not to strengthen its specific action and fragmentation? Thicken the walls of the capsule and execute them with a notch. I am sure that the mass of weapons will not increase much, but the combat effect will be significant.

Not so good RPO-A, as it was believed, and against armored vehicles. True, it hurts her very own, but the crew remains efficient and continues to fire from on-board armament. Therefore, it is most expedient to allocate a grenade thrower and a flamethrower man in a pair of “hunters” behind armored objects. The first of the RPG-7 stops it, and the second of the RPO-3 reliably ignites.

Both Afghanistan and Chechnya convincingly proved that it is time to revise the ownership of flamethrower units. Platoon not to give, but to have in the staff of the battalion. By the way, this has already been practiced in the Afghan war. Here is a typical layout: 18 manpower, 28 flamethrowers, 2 armored vehicles and X-NUMX small radio stations P-10. 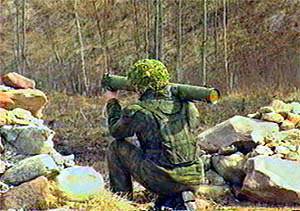 I understand: now it is difficult to find people, equipment and weapons. But to solve the problem, as demanded by the tough tactical standards of the modern battlefield, is necessary. There are many winning points in this. Firstly, now the battalion commander will not have to guess whether he will be allocated fire-throwers for reinforcement or not, but will have at his disposal impressive strength. Under special conditions (when operating in the mountains, city), it will be possible in the shortest possible time to independently create assault groups capable of performing multi-dimensional tasks.

Secondly, the control scheme will be simplified. There will be no need for dual subordination (with the ensuing consequences): to the commanders of the “native” flamethrower company and battalion, to which a platoon is attached. It will be easier to organize communication with pairs of flamethrowers, since each of them will receive a standard radio device.

Thirdly, we should expect a more rational separation of ammunition. And two thirds of flamethrowing shots will be concentrated in the transport of the battalion.

And finally, it is quite permissible for the flamethrower platoon commander to assign the duties of the head of the RCB protection service of the battalion. Whatever you may say, an officer with a higher education is preferable here than an ensign who has even graduated from a special school.

My proposal does not deny the existence of flamethrowing units and subunits as part of the RCB protection troops. Moreover, in my opinion, they should be re-equipped. Or recently adopted for the supply of heavy flamethrower systems TOC-1. Or liquid jet flame throwers similar to LPO-50, but with improved technical and combat characteristics.