L.Ivashov: “Serdyukov is not allowed to put powerful forces in the country's leadership” 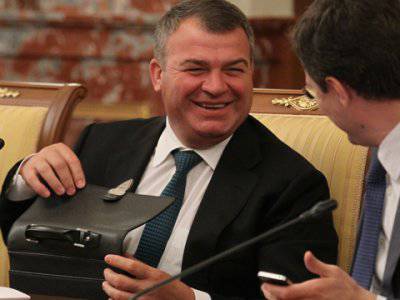 They will not allow equating corruption in the defense system with treason change.


Nevertheless, this is the highest policy in politics - to present obvious and common truths as insight. Has anyone ever had any doubt that property crimes in the defense structure of any country are akin to high treason? It seems that people of reasonable doubt on this part can not be by definition: the causal link is painfully clear here.

But for some reason, our legislator has so far avoided thinking about it, defining corruption in the defense sphere almost on a par with extortion in schools (also bad, but, you see, incomparable in consequences for the country), and the proposed “Fair Russia »The bill amending the Criminal Code, which finally call things by their proper names, is served almost as a breakthrough, the very“ insight ”. But let's not quibble: thanks to the legislator and for the fact that he nevertheless decided to formulate the right thoughts in the form of a legislative proposal. Is it surprising that the initiators were not United Russia, not the Popular Front, which, as we know from them, are tirelessly fighting corruption. And they tirelessly agree with the president, who curses corruptionists in the defense industry. But only, it seems, the relevant instructions from the Administration did not go down to the party of power. Now, probably, elbows gnaw.

In this light, the legislative initiative of the fair-Russian Igor Zotov - specifically his legislative initiative - does not look so promising no matter what respected experts say. Accept such historical (without exaggeration) the document of the Duma obviously can only be under the flag of Putin. Consequently, either in the bowels of United Russia a similar document is already being prepared, which in many respects will turn out (for a look) even more sophisticated than Zotovsky, or a shaft of amendments awaits the existing initiative, each of which will be offered with the most responsible PR support.

But what we will have from all this hype in the bottom line - a question of questions. Is the prospect of gaining the stigma of a traitor to the Motherland to scare away those who saw millions and tens and hundreds? Are they so conscientious? Steal and shy, just to think bad? Of course, the punishment will already be implied otherwise, but here the “inspiring” example of Anatoly Serdyukov, who, as the military investigation literally just established, was “misled” by cunning ladies. Wonderful wording for those who like to cash in on state-owned tranches: “we wanted to do our best, but were misled.”

And after all, someone will believe and even sympathize.

A well-known political analyst, president of the Academy of Political Problems, Colonel-General of the Reserve Leonid Ivashov, in an interview with a columnist for KM.RU, noted that the initiative of the fair Russia, with all its sympathy, is unrealizable and insufficient:

- I do not think that United Russia will pass this law. And the proposal itself to equate corruption in the military sphere with high treason does not sound like a legal norm, but rather as political public relations. Another thing is that corruption crimes committed in the field of defense should be punished an order of magnitude more strictly, this should be an aggravating circumstance. Treason against the motherland implies life imprisonment, and, of course, the legislator will never go on to give a life sentence for corruption, even in the military sphere. The initiative itself is positive, it can only be welcomed, but at the same time it is necessary to look at things soberly. Yes, Putin also talked about this, but these are all just political phrases.

The main trouble that exists today is the systematic elimination of the country's defense potential. It happens by the will of those who pushed through the Agreement on the Status of Forces, who allowed the NATO troops to move almost freely throughout our country. These influential forces in the leadership of the country today possess tremendous penetrating power. They pushed Serdyukov to the post of minister, they gave him a blank check for the theft and the destruction of the country's defense. But today they do not allow him to be imprisoned, because they are afraid of the judicial process, that he can name certain names, draw all the high-ranking forces with him, that they have been covering him all this time.

The plan with Serdyukov did not justify himself, but the destructive forces undertook a much more savage attack on the defense capability of our country. Today we can perfectly see how those enterprises that create advanced weapons are privatized in the first place. These are research institutes, these are our illustrious enterprises. It was decided to strike at the military-scientific, for design ideas, for achievements in the field of defense and defense-industrial research, in fact, to destroy the material basis for the army. Yes, Sergei Kuzhugetovich somehow tries to adjust the situation, money is allocated for new developments, but ultimately it all comes down to the fact that we are still buying weapons abroad, and we are buying, as a matter of fact, old stuff.

A separate issue is the management of defense enterprises. Dubna has a renowned International Center for Nuclear Research. In fact, this is after all the basis of our power, but since this center is international, its leadership turned out to be such people who wrote such instructions that no secret development can be conducted there: everything needs to be posted on the Internet, everyone needs to share with Americans and not only . The most promising developments and achievements in the field of defense can no longer be realized.

The existence of the legendary MiG company is a big question. Conversations are underway that the Russian army needs only Sukhoi heavy fighters. Against this background, MIG's light fighter aircraft are being “extinguished”. The result is that throughout the world, including the United States, the ratio of light and heavy fighters is approximately 70 to 30, and we have the opposite: heavy fighters will be enough, but fighters for our defensive doctrine to gain air supremacy, cover the troops will not.

And here is the most recent example. We have such a State Research Institute of Chemistry and Technology of Elements of Organic Compounds. This is a unique enterprise where development is carried out in order to provide our Topol to increase its efficiency, to strengthen our rocket engines, to enhance the effectiveness of conventional weapons, to cover ships through certain curtains, and so on. On this part are the most powerful development. Meanwhile, at the end of last year, the Americans demanded that these developments be transferred to them for very good money. As a result, the leadership of Rostekhnologii issued a decree according to which the director general of the institute was removed from his post, and a graduate of the Moscow State Institute of International Relations, candidate of political sciences was put in his place. That is, in fact, from the United States an order came to our country from above, ours took it under the visor and executed it.

Treason to the Motherland is not just corruption (nowhere without it, such a system has been created). But the facts of undermining the country's defense should be interpreted unequivocally as a betrayal of the Motherland.

Ctrl Enter
Noticed oshЫbku Highlight text and press. Ctrl + Enter
We are
About Stalin and KhrushchevWhat you didn't want to know about England
Military Reviewin Yandex News
Military Reviewin Google News
144 comments
Information
Dear reader, to leave comments on the publication, you must sign in.