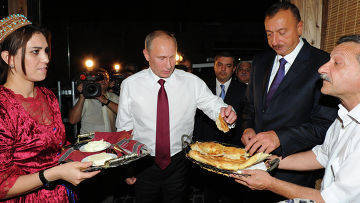 For the first time in his third term, Russian President Vladimir Putin visited Azerbaijan. In the future, the former Soviet republic may well take the leading position in the South Caucasus, and Putin’s visit was another attempt to demonstrate to Washington that today the zone of Russian “privileged interests” covers almost all former Soviet republics with the exception of the Baltic countries.


Since 2008, the United States has managed to significantly reduce its presence in the post-Soviet space. And this space has almost completely passed under the influence of Russia in all areas, except for transit routes to Afghanistan, which will cease to exist after the 2014 year. Meanwhile, Russia gladly filled the vacuum that Washington left behind.

But, most likely, Putin had no other choice. The stability of the situation in the South Caucasus and, thus, in Central Asia depends on the stability in Azerbaijan. Russia regards the presidency of Aliyev as a continuation of the course outlined by his father, Heydar Aliyev, who has a rather warm relationship with Putin. Azerbaijan continues to develop partnerships with Russia, while avoiding entry into a full-fledged alliance. And his sworn enemy Armenia does the same.

Putin and Ilham Aliyev have close friendships. And Russia's inability to offer a competitive opposition candidate instead of Oscar winner and Russian citizen Rustam Ibrahimbekov guarantees Aliyev to win the presidential election.

On the whole, Putin is quite satisfied with this outcome, since Moscow prefers to continue developing bilateral economic cooperation, while Baku is gradually moving closer to Ankara, Brussels and Washington.

The problem is that the White House and the State Department are showing less and less interest in the post-Soviet space, which will also be facilitated by the withdrawal of NATO troops from Afghanistan.

Meanwhile, Moscow and Baku are closely cooperating with each other within the framework of the Black Sea Economic Cooperation Organization. Azerbaijan is Russia's largest trading partner in the South Caucasus, which in 2012 delivered a billion cubic meters of gas to 1,5 in Gazprom. It is obvious that the leaders of the two states had something to talk about, especially considering that the Russian delegation included oil magnates Sechin and Alekperov.

At present, Russia is concerned that Azerbaijan continues to gain weight as an independent exporter of energy carriers and a transit point for the supply of energy resources from Central Asia to Europe. Moscow has long been accustomed to the fact that Russia is the main supplier of oil and gas to European markets.

Nevertheless, Russia is striving to snatch a piece of unexpected energy luck from Azerbaijan. The Russian oil giant Rosneft is showing its interest in participating in the Absheron gas project. This will help Rosneft to enter the lucrative European gas market as a competitor of another Russian giant, Gazprom. During the visit of the Russian delegation to Baku, the heads of the Russian and Azerbaijani oil companies, Sechin from Rosneft and Abdullayev from SOCAR, signed an agreement on cooperation in the field of energy.

The Nagorno-Karabakh conflict between Armenia and Azerbaijan remains the main stumbling block in relations between Baku and Moscow, but Putin’s visit did not lead to any changes on this issue. Putin reiterated that this dispute must be resolved by political means, and not by war. This was an unequivocal signal for Azerbaijan, whose military budget exceeds the state budget of Armenia. The potential of the Azerbaijani army continues to grow due to profits from the sale of energy resources.

The Kremlin is not yet ready to discuss new initiatives and proposals aimed at resolving this long-standing conflict. This is largely due to the fact that Nagorno-Karabakh is the main guarantee of Russia's political and military presence in the South Caucasus.

During the presidency of Dmitry Medvedev, Russia actively acted as an intermediary in resolving this conflict, but by now the Kremlin has noticeably reduced the intensity of its efforts. This gives Washington the opportunity to strengthen relations with Azerbaijan and Armenia and to restore its position in the region.

The United States can take advantage of this situation by inviting Russia to cooperate in trying to find ways to solve the Nagorno-Karabakh conflict. Secretary of State John Kerry has repeatedly spoken about the need to find a way out of this conflict. Since the time of his senatorial activities, when he maintained close ties with the Armenian diaspora, he has particularly warm feelings towards Armenia.

However, the administration seems to have chosen to devote Kerry’s valuable time to solving more ambitious, complex, and protracted conflicts — conflicts in the Middle East. Unfortunately, this opens up a lot of prospects for Russia, which can now freely restore its influence in the South Caucasus.

Ctrl Enter
Noticed oshЫbku Highlight text and press. Ctrl + Enter
We are
The head of the DPR visited Gorlovka, the cadets took the oath, and in the "Olympic" hosted the forum "Donetsk Republic"Caucasian affairs
190 comments
Information
Dear reader, to leave comments on the publication, you must to register.