Situation in Egypt: Russia may use the U.S. failure 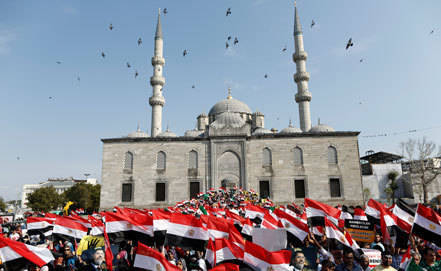 Coup, which committed the Egyptian generals, displacing President Mursi, logically completed a large-scale sweep of the political field in Egypt from the president's supporters and drew a line under the rule of "Muslim brothers."


Egypt is a major country of the Arab world, and no temporary or permanent problems it does not override this immutable fact. Therefore already happened in Egypt will inevitably affect the entire region, but in fact, already the most active way and reflected.

The first thing to note - the Egyptian 2011 revolution of the year, with all its visible "color" signs and the participation of the West and, above all, the United States, had deeply internal reasons. The secular Arab regimes that relatively comfortably existed in the world divided by the Cold War, quite comfortably integrated into it and drew a resource from the confrontation of two global rivals. The collapse of the USSR could not help but reflect on them, but it was precisely secular regimes that could not develop new approaches in the new and rather incomprehensible to anyone world.

Deadlock, which also hit the Egyptians, and the suspension of development stagnation caused the rise of alternative projects, and for the Islamic world only alternative vesternezirovannym secular regimes could only be political Islam varying degrees of radicalism.

Do not be a purely subjective factor - the three-year drought of the 2008-2010 of the year in the Middle East, aggravated by the drought in the Egyptian breadbasket - Russia - it is possible that the explosion and the arrival of the Arab spring would take place a year or two or three later. No one could have imagined that in 2010, Russia would be forced to ban grain exports, which sharply aggravated the problems in Egypt, which literally three months after the overlapping of the life-giving grain jet had flared.

Since no one expected, it is not surprising that the Egyptian nomenclature considered it good to sacrifice its permanent leader, just to maintain a presence in power. Let for time and especially nominal. Egypt is a classic Arab country where the army is more like a state corporation than a state institute. Until 40% of the Egyptian economy is controlled by the military, a significant part of the Egyptian civilian nomenclature came out of the army, and therefore it was the army that very quickly reacted to the threat of revolution and did everything to somehow reduce its heat and give the sacrifice to the slaughter.

It is worth noting that Mubarak himself made a series of mistakes that are unpardonable from the point of view of the nomenclature, and the main one is the problem of the successor. No problem in the fact that Mubarak was succeeded by his son Gamal, the Egyptian nobility did not see. But to raise his son Mubarak was obliged. And with this, Raisa was not well. Gamal had no authority, and most importantly - significantly spoiled relations with the army elite. The combination of these factors and led to the fact that the personal interests of the military and officials outweighed loyalty to Mubarak. He passed quickly and easily.

And then it began exactly what should have been after any revolution. The revolutionaries entered the line of disengagement, which has not ended. Under pressure from the United States, the Muslim Brotherhood came to nominal power, serving in the US plans to reformat the Middle East as a very serious tool. The military gave way, but, as expected, from the very beginning they were going to return to power. Even with the risk of complicating relations with the West. After the revolution with respect to the United States, the Egyptian nomenclature did not have any illusions - the swiftness with which the former ally surrendered it in the name of new “friends” showed the military better than any words that they could be written off just as quickly and without delay.

The military did not harbor any illusions about the "moderate" "Muslim Brotherhood." They saw perfectly well what the "moderate" Islamists in Turkey are doing with the army, and their fears for the Turkish generals lastingly justified their life terms. The Egyptian military saw very well what is the territory under the control of the “Muslim brothers” of Hamas in Gaza, which has become a cloaca and an abscess of the entire region. The main thing is that the army rightly feared for its property, which the “brothers” could requisition in the name of saving the economy, for they offered nothing more constructive either before or after the election of Mursi.

Moreover, all the steps Mursi in the economy only strengthened the military in the thought that their term was already close. The surrender of the territories to Qatar and Sudan, support for the incomprehensible war in Syria inevitably led Egypt and its former nomenclature to a final collapse, followed by the fragmentation of the country, mass exodus, civil war and wars with neighbors. Coup at any cost was the last way for the army - and inevitable.

The military's role in the conflict

Already at the beginning of the year, all signs of an impending coup appeared, and in May they were formalized through the sudden emergence of the Tamarod movement, which launched the process of preparing for it in real field conditions.

At the same time, the former nomenklatura did exactly what it was supposed to do in its situation — it sabotaged the decisions of the new government at all levels.

The helplessness of the “brothers” in curbing sabotage and their inability to cope with management and economic problems played into the hands of the military. The “brothers” managed to rebuild against themselves even their Salafi allies, who over the past months have taken a principled and stressed neutral position with regard to all military actions. The military made a bet on Saudi Arabia, which is also in line for surrender from the United States, and is well aware of this. The instinct of self-preservation created an amazing alliance between the secular army of Egypt, the Salafis and the Wahhabi monarchy of the Gulf.

Having made a coup, the military placed themselves in an extremely rigid decision-making framework, which they carried out to the nearest comma. The tasks of the army are to sweep away the “Muslim brothers”, to ensure security, to hold elections for a new civil administration, and to back up its actions in carrying out difficult economic reforms with its power source.

The military has decided the first task, the second is already being solved, and in the spring of 2014, they will begin to solve the third. The financial support of the Arabian monarchies will help them get through this difficult stage. The states, having put on the "Muslim brothers", have lost all other allies - and now they are forced to hold on to them to the end.

That is why the generals slow down with the prohibition of the movement of "brothers", leaving them a loophole - stop resistance, and you will be admitted to the elections. At the same time, the military are well aware that for the “brothers” to agree to this proposal means to agree with the coup. This will unambiguously lead to a split of the movement into compromisers and irreconcilables, which will weaken them and affect the outcome of the elections. The disagreement of the “brothers” will allow the army to simply ban them in the long run and exclude them from the electoral process.

In a sense, this conflict of interest allows us to explain the underlined neutrality of Russia in the Egyptian events. On the one hand, a convenient reason - we do not interfere in internal affairs, let the Egyptians solve their problems themselves. On the other hand, Russia must use the obvious failure of the United States and enter Egypt, occupying free niches. At the same time, even at the risk of causing even greater US dissatisfaction than in the case of Snowden. But Egypt is not Snowden. Here we can and must fight, albeit at the cost of complicating relations. Only this should be done carefully, without haste, but also not late in decisions.

Ctrl Enter
Noticed oshЫbku Highlight text and press. Ctrl + Enter
We are
If not for the generals ... Shameful history of the Ukrainian armyFor a revolution or a counter-revolution? The role of the military in the politics of Egypt
Military Reviewin Yandex News
Military Reviewin Google News
13 comments
Information
Dear reader, to leave comments on the publication, you must sign in.