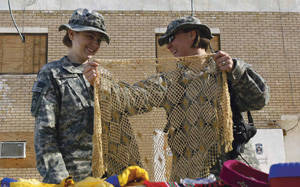 The Pentagon must abandon the legislatively fixed practice of prohibiting female military personnel from directly participating in hostilities. This recommendation was made in the draft report of the Military Leadership Diversity Commission (MLDC), which was published on its website in mid-January of this year. The final report should be on the table of US President Barack Obama, and will also be presented to military officials and parliamentarians already in March to make a final decision on making the appropriate changes to federal legislation and MO laws.

Currently, US legal norms prohibit the direct participation of American servicemen in hostilities. They have the right to serve only in units and subunits for the support of combat operations of ground forces, including medical, rear and transport. Members of the commission, established two years ago in accordance with the law on the allocation of national defense for the 2009 fiscal year and consisting of high-ranking current and retired representatives of US law enforcement agencies, as well as civilian officials, call for this regulation to be abolished.

The status of full-fledged military personnel of the US Armed Forces was obtained by American women only in the middle of the last century, when in the Pentagon in 1942 a female auxiliary corps was formed. Since then, the right of women to serve in the Armed Forces has been officially recognized. In the 1967 year, the existing restrictions on the quantitative norms of recruiting women into the army and for them to occupy military posts and obtain ranks were lifted.

In 1993, women received the right to serve in the Air Force and the US Navy. And starting from 2011, they will not only drive combat aircraft and serve on ships, but will also be part of the crews of submarines, including SSBNs.

According to official data from the Pentagon, currently the number of women in the Armed Forces is about 14%. They are allowed to be trained in the 92% nomenclature of military specialties. In 2008, the first woman became a full general of the US Army, that is, put on epaulets with four big stars. Today 64 women serve in the Armed Forces with general and admiral ranks.

As the representative of the Ministry of Public Relations for public relations Eileen Leinez told reporters, more than 2,2 thousand were women from 255 million soldiers and officers who passed through Iraq and Afghanistan. According to the Pentagon, at the beginning of January of this year, 311 women died in Iraq. The loss of the male part of the military amounted to almost 4,3 thousand people. In Afghanistan, 24 wore epaulets of the weaker sex and about 1400 representatives of the strong.

OPPONENTS AND APOLOGIES OF INNOVATIONS

Disputes about allowing women to hold weapon and with the men go to the front line for a long time go to the Pentagon, in the political circles of America and in the expert community. This idea has a lot of protagonists and antagonists. Both those and others put forward a lot of arguments for and against the implementation of this idea and its legislative design.

Opponents of the abolition of the ban on the participation of women in hostilities believe that the female half of the US armed forces do not have the necessary physical training and endurance necessary to participate in combat operations. In addition, opponents of changes in existing legislation argue that the inclusion of women in infantry and other combat units, leading the fighting, as well as allowing homosexuals and lesbians to serve in the army, will cause significant damage to the integrity and cohesion of military formations. They also declare that the American public, no doubt, will be extremely negative about the fact that a large number of her daughters will return home in funeral bags.

Supporters of the changes proposed by the Commission refute the arguments put forward. One of the leading experts of a research organization called the Institute for the Study and Education of Women, which studies the problems of ensuring women's equal rights in all spheres of American society, Lori Maning said that at present the implementation of the idea of ​​involving women in the conduct of hostilities is solved by myself. The commanders of the ground forces and marine corps fighting in Iraq and Afghanistan often ignore the Pentagon’s policy toward female military personnel and send them to the battlefield. According to her, the leadership of the troops, playing in terms of “attaching” personnel to the combat structures and “including” it in them, formally seems to fulfill the requirements of their highest authorities to ban engaging the weaker sex to conduct operations. But in fact, "for nine years now," in both countries, warrior women simply fight on a par with men.

The former KMP captain, Anu Bhagwati, currently heading the human rights group “Network for Assisting Women Soldiers”, stated that the current Pentagon policy is nothing more than a “huge glass ceiling for military women”. “This policy is archaic; it does not reflect all the victims of female military personnel and the contribution they make to military affairs. This policy ignores the reality of modern military doctrine, ”the retired captain stated. She also noted that since the advancement of the military and their high positions are completely dependent on their combat experience, changing the current Defense Ministry’s policy on women will only mean justice is restored.

This fact is also noted by MLDC experts. They argue that the ban on participating in hostilities does not allow women to occupy about 10% of positions in the ground forces and in the Marine Corps (ILC). And this is a significant barrier to their career growth.

The authors of the report completely refute the statements of their counterparties that the adjustment of the women's policy of the Pentagon will have a negative impact on the combat units. “Today there is no evidence that the inclusion of women in their previously closed units or their appointment to positions that they are currently prohibited from occupying will have a negative impact on such an important characteristic of the combat readiness of troops as their unity,” the authors of the document write . They also point out that recent research conducted by experts of the Defense Advisory Committee on Women in the Armed Forces showed that the participation of women in combat operations in Iraq and Afghanistan had “only a positive impact on the performance of the military tasks of the troops”.

High-ranking Pentagon officials also repeatedly talked about future changes in the current practice of using women in the Armed Forces. For example, last September, Secretary of Defense Robert Gates, speaking to students undergoing military training at Duke University (North Carolina), stated that he was convinced that in the near future women would be allowed to serve in the special forces, in particular, in units designed to conduct closed operations. The minister also noted that over time, women will gradually gain access to all other structures of these troops.

Members of the commission recommend a phased approach to the issue of expanding the field of activity of female military personnel in the armed forces. At the first stage, in their opinion, it is necessary to fill with women all positions in parts and subdivisions of the US Armed Forces, where military personnel of those specialties that are currently allowed to occupy the weaker sex are necessary. After that, the Pentagon leaders, types of the Armed Forces, special and joint commands should develop approaches to gradually increasing the number of positions that women may occupy in the troops conducting combat operations.

Pentagon spokeswoman Eileen Leinez told reporters that the Defense Ministry’s leadership would consider the recommendations of the commission when the draft report was finalized. However, she said, regardless of what decisions will be taken at the legislative and administrative levels, women in the US military will continue to participate in combat operations.

"Women in the US armed forces continue to make a huge contribution to military operations and show great sacrifice," she said and said that "even under the current restrictions, military women will continue to be attached to units that participate in military operations or can be brought to their management and occupy the positions for which they were prepared in the learning process. "

Homeland ideas feminization of the army was the United Kingdom. In 1653, the first female military hospitals appeared in England, in which the wives of soldiers worked. In the 1917 – 1919, the Royal Armed Forces, the Royal Navy Auxiliary Corps and the Women's Legion of the 100 Thousand People’s Section were formed as part of the British armed forces.

For the first time, on a par with men, as full-fledged soldiers with the corresponding social status, without any restrictions, women began to serve in the Canadian Forces in 1895. They were taken into the army in peacetime, not only in support services, but also in combat units as full-fledged servicemen. This tradition of the leadership of the Canadian Forces still adheres.

The Second World War led to an increase in the number of women in the army. In the English army, 225 thousand women served, in the American army - 450 – 500 thousand, in the German army - about 500 thousand, and in the Soviet army more than 800 thousand, of which 80 thousand held officer ranks.

In 1975, in Germany, the female half of the population was granted the right to serve in the army in the sanitary forces. And a little later in military bands. By decision of the European Court of Justice, with 2001, German women had access to all military specialties and to all branches of service, including the landing troops, the submarine fleet and the Air Force. In the 2010 year, there were 16,9 thousand women in the ranks of the Bundeswehr (8,9% of the total number of personnel), of whom 2,6 thousand had officer ranks.

A law allowing women to join the armed forces in Italy was passed at the end of 1999. Italians can serve in any units of the national armed forces, except underwater fleet and special forces. Today, more than 10 thousand citizens of Italy serve in the army. In the ground forces, their number is about 6,3% of the personnel of the Armed Forces, in the Navy - 3,8%, in the Air Force - more than 1,6%.

In Israel, the Women's Corps of the Defense Army was created in 1948 year. Since 1959, in accordance with the law, all Israeli women are subject to military service. In 1995, through the country's Supreme Court, the women of Israel achieved the right to serve in the Air Force. In 2000, a law was passed allowing them to serve in combat units. Currently, 90% military specialties are available to the female half of the Promised Land. Today, about 33% of the Israel Defense Forces are ladies. The Karakal infantry battalion guarding the southern borders of the country, 70% consists of Israeli women.

Turkish women have been accepted to military academies since 1955. From 1957, they received the right to receive officer ranks. Currently, about 1,6 thousand representatives of the female part of the population serve in the Turkish troops.

From the beginning of the 90s in India, women were allowed to serve in non-combat units of all branches of the military. According to the 2010 year, 1012 female officers serve in the Indian army.

In South Korea, women got the right to enroll in military academies in 1998. Currently, in the country's army, officer positions are occupied by 2,9 thousand women.

Data on the number of women in the DPRK are closed. However, according to international military experts, their number in the people's army can reach 10%. Women use all the armies of the world, and experts believe that in the future the number of women and men on the battlefield will correspond to their percentage in the population of the planet.

Ctrl Enter
Noticed a mistake Highlight text and press. Ctrl + Enter
We are
Soldiers of the Middle Kingdom are torn into battleMemo to mercenaries in Africa
Add a comment
Information
Dear reader, to leave comments on the publication, you must to register.