August 21 2013
23
Sturm (according to the NATO AT-6 Spiral codification) is a Soviet anti-tank missile system (ATGM) based on the 9X114 Kokon supersonic rocket, which is equipped with a radio command guidance system on the target. The chief designer of the complex was the well-known Soviet weapons designer S. P. The Invincible. The complex was created in several versions: the 9K113 "Sturm-V" helicopter for the Air Force and the self-propelled "Sturm-S" for the needs of the Ground Forces. In 1996, on the basis of the 9М114 ATGM, a multipurpose 9M120 “Attack” guided missile was created, which was distinguished by an increased power of the warhead, the missile was the same for the Sturm-V and Shturm-S complexes. In 2010, its upgraded version of the 9М120-1 was created, equipped with a combined radio command and laser beam target targeting system.


The Sturm-S self-propelled anti-tank system (9P149) was the first multi-purpose vehicle that was able to fight not only with tanks and other enemy armored vehicles, but also successfully hit his manpower and field fortifications and even low-speed low-flying air targets (helicopters, UAVs). However, the main objective of the complex still remained the fight against enemy armored vehicles.

The complex was developed in the middle of the 1970s in the Kolomna machine-building design bureau, in 1979 it was adopted by the Soviet Army. The Sturm-S complex has proved itself quite well during the military campaigns in Afghanistan and Chechnya. At the maximum range, he ensured the defeat of a target meter-by-meter (he fell into caves, embrasures, etc.). The probability of hitting a missile point targets in combat conditions was - 0,9. The “Attack” complex that replaced the “Sturm”, thanks to the same dimensions and the same seats, ensures its use on all existing old carriers. 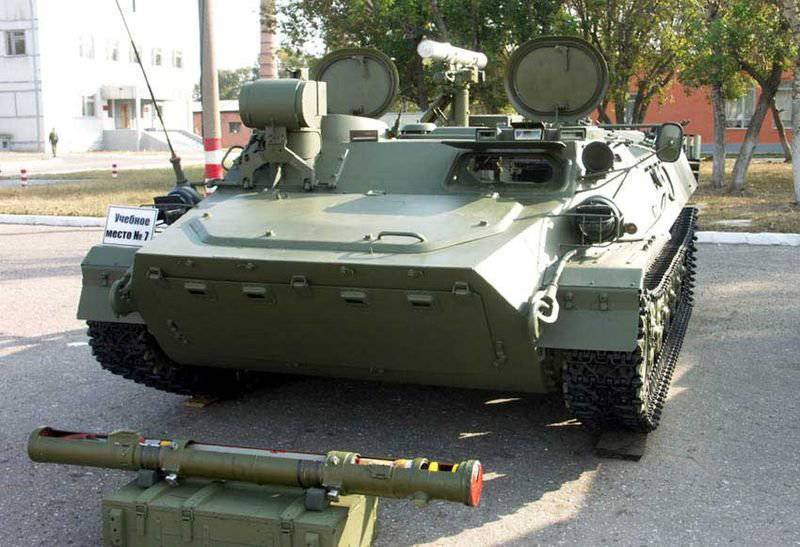 The Shturm-S complex used a multipurpose 9М114 guided missile, which was equipped with a single-piece cumulative warhead, which was covered with a live-out fairing. The rocket was made according to the aerodynamic "duck" scheme with a semicircular wing and with a folding front tail; in the off position, the wing was pressed against the cylindrical body of the rocket. The rocket's high speed of flight - up to 530 m / s was provided by a solid-fuel dual-mode cruise engine. In this case, the armor penetration standard monoblock warhead was 550-600 mm.

Missiles were delivered in special transport and launch containers (TPK). In the aft part of the TPK pipe there was a starting accelerator - a booster engine, which was separated from the rocket after its work was completed. Like all the other ATGMs belonging to the 2 generation, the Sturm missile was supplied from the manufacturer and operated in parts in the glass-plastic mater. The design of the TPC provided the rocket with axial rotation at the time of launch, in addition to this, the container allowed the rocket to be stored in it for at least 10 years.

Also the Shturm-S complex can be equipped with an 9М114F anti-tank system equipped with a thermobaric, that is, volume-detonating warhead. The use of this rocket allows you to simultaneously hit not only the enemy's manpower, but also destroy its field fortifications, long-term firing points and other engineering structures. In connection with the emergence and spread of dynamic protection of tanks, a new rocket was developed, which received a tandem warhead. This missile had an increased range and was able to penetrate armor, which was equivalent to 800-mm homogeneous armor. 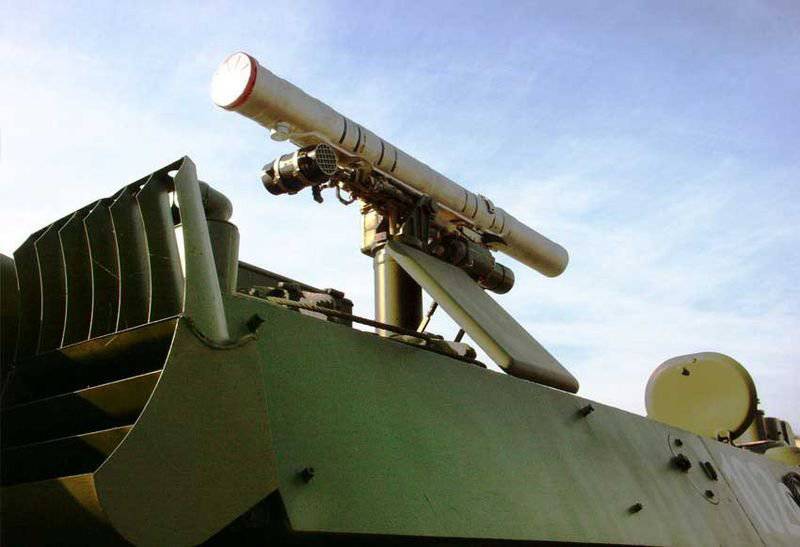 The ATGM target guidance system is semi-automatic, radio command, using an infrared tracking signal. The control teams were transferred to the front compartments of the ATGM through cables that were laid in a special pipe running along the longitudinal axis of the combustion chamber of the cruise solid-fuel rocket engine. In the tail part of the guided missile behind the two-nozzle engine block were elements of the radio command control system. At the rear end of the marching stage of the rocket was located the source of infrared radiation, which was recorded by helicopter or ground-based equipment of semi-automatic control, also there was a radio antenna.

The ATGM guidance system has a high noise immunity due to the use of fixed codes in the 2's rocket guidance, as well as fixed frequencies. It should also be noted that due to the supersonic speed of a rocket flight, it is impossible for it to deliver radio interference by means that exist at a given point in time. To control the shooting, a special program is used (“Dust” mode), which allows the ATGM to fly at the initial segment of the trajectory above the line of sight, and at the moment of approaching the target at a distance 5-500 meters is reduced to hit the target.

As the main base for the 9P149 combat vehicle, part of the Sturm-S complex, the well-known MT-LB multi-purpose light armored transporter-tractor, which had been mass-produced at the Kharkov Tractor Plant, was chosen to be well-known among the troops. Compared with the wheeled chassis of the BRDM-2 family used in the Konkurs complex, this combat vehicle was distinguished by better maneuverability and internal volume, which made it possible to install a retractable launcher (PU) and automatic loader. The ammunition of the installation included 12 missiles, and this despite the fact that TPK "Sturm" was more than 1,5 times longer than TPK "Konkursta". 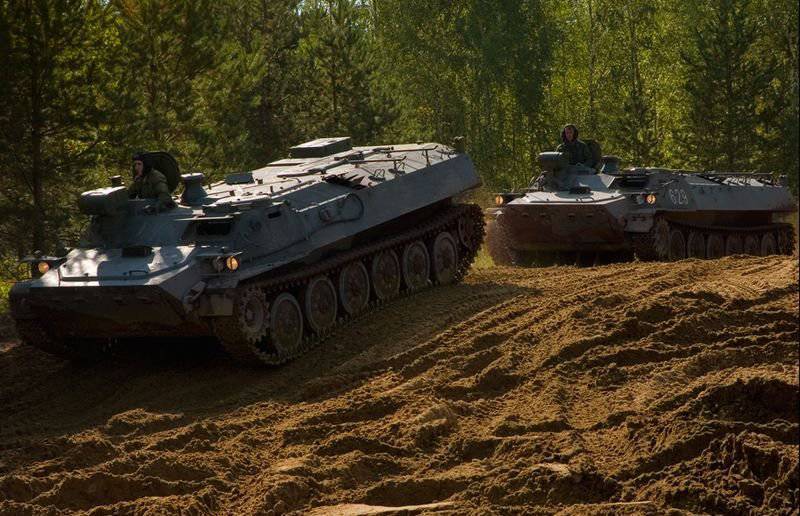 In the stowed position, the PU of the “Sturm-S” complex is hidden inside the case, where the mechanism is located (gearbox and special rotating drum). 12 launch containers with anti-tank guided missiles are located on the lodgments of the drum. When firing the launcher captures the container and automatically transferred to the combat position. After the shot is fired, the used container is discarded and the process of reloading the missiles is carried out fully automatically. The time from the moment you press the start button to the exit of the missile from the TLC is only 1 a second. The process of reloading takes time, which is less than the time of the flight of the missile to the target.

A feature of the 9P149 combat vehicle was large angles of horizontal focusing within ± 85 °, vertical guidance is possible in the range of - 5 ° to + 15 °, as well as a launcher carrying only one TPC with a missile. In general, the “Sturm-S” complex is characterized by a fairly high rate of fire - 3-4 shots / min. Located on the left side on the roof of the machine, the optical sighting device has a built-in channel for tracking the infrared emitter of the guided missile. The aiming complex allows firing at targets moving at a frontal speed of 80 km / h and with a flank speed of up to 60 km / h. In addition, an ATGM launch was also implemented from the afloat position when the combat vehicle was moving at a speed of up to 5 km / h. A low silhouette of a combat vehicle (height on the roof of the entire 1,8 m.) And low placement of the center of gravity make it possible to apply the “Sturm-S” on fairly steep slopes.

The combat vehicle of the Sturm-S complex is equipped with a crew protection system against damaging factors of weapons of mass destruction. It consists of a device for chemical and radiation reconnaissance, a filtering unit, as well as a device for sealing the body. In addition, the Sturm-S anti-tank complex is equipped with communication facilities with a range of up to 40 km. and night vision devices. On the highway "Sturm-S" mass 12,3 tons can accelerate to 70 km / h. The power reserve of the machine is 500 km. The transition time of the Sturm-S complex to the combat position is only 15 seconds, to the traveling position - 12 seconds. The crew of the complex consists of 2-x people. 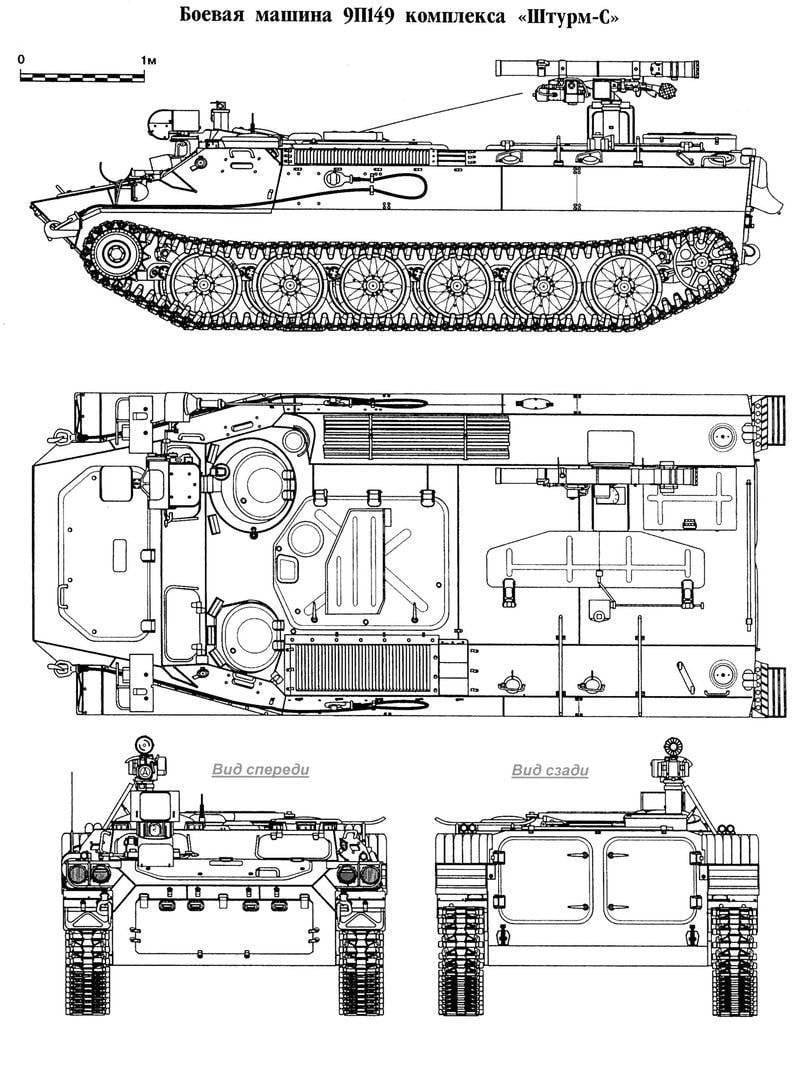 The self-propelled anti-tank complex "Sturm-S" was adopted in service of army and front-line units in the 1979 year. With the presence in the military units of a much more popular complex “Competition”, the anti-tank missile system “Sturm-S” was initially considered as a means of preventing possible breakthroughs of enemy tank units into the depth of our defense. That is, he had to play a role similar to that performed by the anti-tank artillery of the Reserve of the Supreme Main Command during the Great Patriotic War. It is worth noting that, fortunately, it was not necessary for the Sturm-S complex to perform such a role. During the anti-terrorist operation in Chechnya in 1999 – 2000, the Sturm-S complex was mainly used to defeat the militants' long-term firing points. Currently, the complex continues to be in service with the Russian army, as well as with the armies of the republics of the former USSR.

The disadvantages of the project included the impossibility of detecting targets at night by the 9P149 combat vehicle without using external target illumination. However, this deficiency was corrected in the Sturm-SM and Sturm-SME complexes.

At the same time, the advantages of this complex include:
- Various types of missile warheads;
- Supersonic speed of flight of rockets both on the line of sight and along the trajectory above the line of sight;
- Missile launch time less than 1 seconds;
- Interference-free channel guidance (millimeter);
- Ensuring the buoyancy of the 9P149 combat vehicle, as well as the possibility of firing rockets afloat.

Ctrl Enter
Noticed oshЫbku Highlight text and press. Ctrl + Enter
We are
Is the "old" well forgotten to become the "new"? Part-2. At the call of honor and dutyCombat amphibious assault vehicle "Wiesel" and "Wiesel-2" (Wiesel)
Military Reviewin Yandex News
Military Reviewin Google News
23 comments
Information
Dear reader, to leave comments on the publication, you must to register.