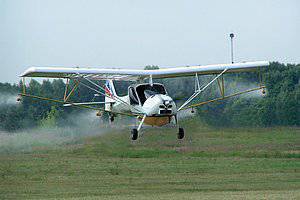 The Russian Ministry of Defense intends to acquire about 300 light training aircraft MAI-223 Kitenok designed by Moscow aviation Institute, writes Lenta.ru. This was stated by Russian Minister of Defense Sergei Shoigu.
According to him, the need for Russian Air Forces in aircraft of this type is currently 300 units.
In August, 2012, Sergei Shoigu, then the governor of the Moscow region, proposed to resume production of light multipurpose An-2 aircraft. It was proposed to produce airplanes at the facilities of a promising aircraft building cluster in Zhukovsky.

Ctrl Enter
Noticed oshЫbku Highlight text and press. Ctrl + Enter
We are
MAI: a tethered drone developed by the institute will be used on various armored vehiclesMedia: Putin vainly admired the T-50 fighter - he was shown the plane with the old stuffing
Military Reviewin Yandex News
Military Reviewin Google News
9 comments
Information
Dear reader, to leave comments on the publication, you must sign in.