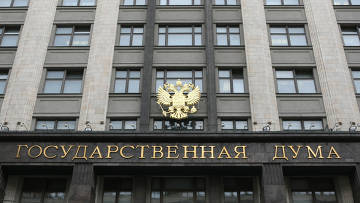 The State Duma on Friday passed in the first reading government amendments to the law "On Countering Terrorism" on the creation in Russia of a three-tier system of terrorist danger.

The document provides for the establishment of the following levels of danger: increased ("blue"), high ("yellow") and critical ("red").

According to the deputy director of the FSB, Yuri Gorbunov, the relevant decree is already being prepared.

The levels of terrorist danger will be established when a threat of a terrorist act arises within certain territories (objects) of Russia.

When declaring levels of terrorist danger, the bill does not provide for the establishment of new measures that restrict the rights and freedoms of citizens, the document says.

It is proposed to entrust the leadership of the counter-terrorist operation to the official who made the decision to conduct it, and to establish that, during the operation, its leadership can be entrusted to another official only by the head of the federal executive body in the field of security (head of the FSB - ed).

A ban is imposed on the intervention of any other person, regardless of the position he occupies, in the management of the units belonging to the group of forces and equipment from the moment when the head of the counterterrorist operation issued a military order (combat order) to conduct it.

Earlier, Advisor to the Chairman of the National Anti-Terrorism Committee (NAC), Andrei Przhezdomsky, said that a new anti-terrorism system would be introduced in Russia. With the adoption of the law, an appropriate act of the head of state will be prepared, where all the elements and parameters of the functioning of the anti-terror system are regulated in detail.

According to Przhezdomsky, this practice operates in more than 70 countries of the world, and it has proven its effectiveness. The number of levels set abroad varies from three to five depending on the nature and degree of the threat.

Speaking about the Russian anti-terror system as a whole, the representative of the NAC said that it consists of "two interconnected verticals coordinating anti-terrorist measures in the country." The first of these, he said, consists of the structures that organize the activities of the executive authorities for the prevention of terrorism: the NAC and the antiterrorism commissions in the constituent entities of the Russian Federation. The second is the structures that directly supervise counterterrorism activities: the Federal Operational Headquarters and the operational headquarters in the regions.

Przhezdomsky emphasized that there are no additional restrictions for the population when declaring any of the levels. For citizens, recommendations will be developed and issued on how to behave in this or that case so as not to endanger their own lives and the lives of their loved ones. They, for example, may be recommended to refrain from visiting crowded places, to avoid contact with certain objects, which may be camouflaged explosive devices. They may also be advised to increase their vigilance and to pay special attention to vehicles and people near critical and potentially dangerous objects.

The representative of the NAC said that the proposal to introduce a new anti-terror system emerged after large-scale terrorist attacks - Nord-Ost, Beslan, an attack on Nalchik. Then the head of state set the task of "creating a much more effective security system," demanding from law enforcement agencies "actions that would be adequate to the level and scale of the new threats that appeared." 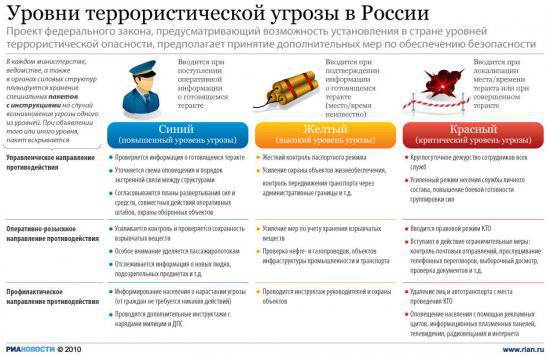