The construction of the Voronezh radar family continues

August 21 2013
30
Recent weeks have been rich in newsconcerning the Russian missile attack warning system. With a difference of several days, several important events occurred. First, it became known that the newly built radar station will soon pass state tests, and a little later there were reports of the start of construction of a second similar object. 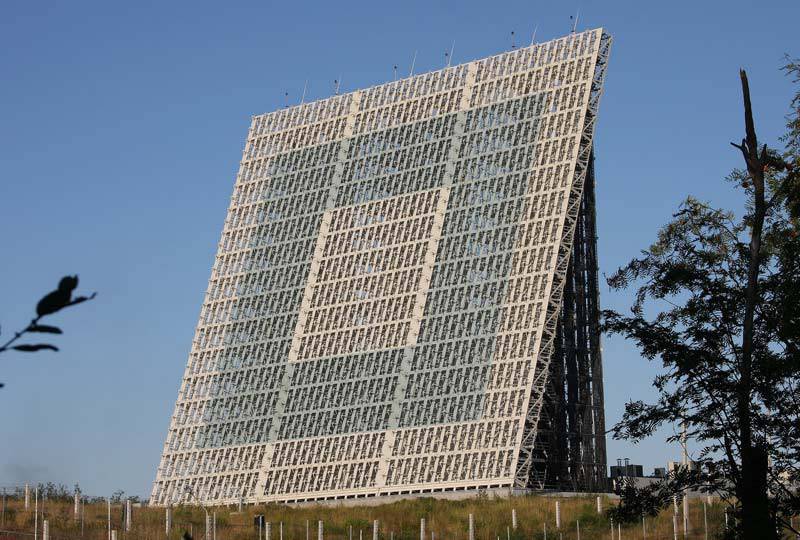 In the first days of this August, the Russian media with reference to the Radiotechnical Institute. Academician A.L. Mintz (RTI named after Mintz) reported that during the completion of work on the second sector of the Voronezh-M radar station located near the town of Usolye-Sibirskoye (Irkutsk Region), the first broadcast took place. This means that the installation of the equipment is complete and the complex is ready for operation. Also in early August, there were reports that state testing of the built second sector of this radar will begin in September. The exact timing of the completion of tests and commissioning of the station has not yet been discussed, but, based on earlier statements, it can be assumed that this will happen before the end of the next 2014 year. Recall that the first sector of the Voronezh-M radar station near Usol-Sibirskiy has already been built and is functioning.

On August 13, near the city of Orsk (Orenburg Region), a solemn ceremony was held to lay the foundation stone of a future military facility. A radar station of the type "Voronezh-M" is also planned to be built near Orsk. The exact dates for the completion of the installation of structures and installation of equipment have not yet been announced. On the eve of laying the first stone, Colonel A. Zolotukhin, a representative of the Ministry of Defense, noted that the Voronezh radar was much more convenient than the previous systems of this class in terms of time and construction costs. So, it takes no more than one and a half years to assemble all the necessary structures and install electronic equipment. For comparison, Zolotukhin cited the timing of the construction of radar stations of previous projects - from five to nine years.

The secret of such a small construction time "Voronezh" lies in the concept of high factory readiness (VZG). This means that most of the structures and elements of the future station are assembled at the plant and the workers at the construction site can only install them. Assembling the radar of the so-called. The macromodules manufactured at the respective enterprises ensure a significant acceleration of the construction work. According to the current plans of the Ministry of Defense, it is the VZG technology that will allow to build several new radar stations of the missile attack warning system over the next few years and give the aerospace defense forces new modern means of monitoring potentially dangerous areas of the planet.

In accordance with the concept of VZG, Voronezh stations of three types can be built:
- 77YA6 "Voronezh-M", developed in the RTI them. Mintz and working in the meter range;
- 77YA6-DM "Voronezh-DM" decimeter range. Established in the Research Institute of Long-Range Radio Communications (NPK NIIDAR) with the participation of the Radiotechnical Institute. Minz;
- 77Я6-VP "Voronezh-VP". High potential radar developed in the RTI.

Currently, four out of nine Voronezh radars are being operated. The first was the station in the village Lekhtusi of the Leningrad region, the construction of which began in 2005 year. This Voronezh-M radar was put into trial operation in the spring of 2007, two years later transferred to pilot combat duty, and since February, 2012 has been in combat duty in normal mode. In the spring of 2006, the construction of the Voronezh-DM radar near Armavir (Krasnodar region) started. Already in 2008, she began work in trial operation, and in the first months of the next year she was transferred to pilot combat duty. Normal combat duty in normal mode began in June of the current year. The third station of the Voronezh-DM type family was built in the Kaliningrad region, near the Pionersky settlement. Construction began in 2008, and at the beginning of 2011, test launches took place and trial operation began. Since the end of the same year, the station carries out combat duty. The last of the radar stations built at the moment is located in the Irkutsk region, under Usol-Sibirskiy. The construction of the first stage of this complex began at the end of 2010, and in the spring of 2012, the first parts of the station were put on experimental combat duty. By the autumn of next year it is planned to complete the construction and testing of both phases of the facility and fully commission it.

According to recent reports, by the end of 2013, active work will begin on the construction of two more Voronezh-VP type stations in the Krasnoyarsk and Altai Territories. In the future, it is planned to build Voronezh in the Murmansk region and the Komi Republic. The possible construction of another such radar station in Azerbaijan was mentioned earlier, but further confirmation of this information did not appear. Perhaps this is due to the fact that the construction of the first Voronezh radar station outside of Russia will only begin at the end of this decade. However, we can not exclude the rejection of such ideas.

According to available data, the capabilities of the Voronezh family of radar systems allow monitoring the situation at distances up to 4000 km (Voronezh-M) or up to 6000 km (Voronezh-VP) in the sector azimuth width 165-295 degrees (Voronezh- DM "under Armavir) or 245-355 degrees (" Voronezh-M "near Lehtusi). The maximum elevation angle of the viewing sector ranges from 60 to 70 degrees. At the same time, it is necessary to take into account the fact that the characteristics of stations, even of one model, may differ, since in the course of serial production certain modifications and improvements are made.

Considering the available data on the characteristics and location of the Voronezh family of stations, it is possible to give an approximate representation of their common field of view. So, the radar station located in the Leningrad region controls Europe and a part of the neighboring regions (from Morocco to Spitsbergen, as well as a large stretch of the Atlantic). The facility near Armavir monitors the space between North Africa and Southern Europe. It should be noted that the Armavir "Voronezh-DM" duplicates the station "Dnepr", located near the cities of Sevastopol and Mukachevo. The radar station from the Kaliningrad region also monitors the same areas as another object of a similar purpose (the radar station in Baranavichy, Belarus) and monitors Europe. The sectors of the Voronezh-M radar station in Usolye-Sibirskoye are directed to China (station first stage) and to the south (second stage). Thus, the new radar stations of the missile attack warning system, partially blocking the review sectors of the old systems, increase the overall capabilities of the aerospace defense forces in detecting potentially dangerous targets.

The “areas of responsibility” of new stations, the construction of which is only planned, are currently unknown. Most likely, the same approach will be applied to their construction as in the case of already operated ones. They will partially overlap the sector of reviews of the complexes of the old model and at the same time fill the gaps between the sectors of the already constructed new ones. As a result, over the next few years, it will be possible to almost completely update the entire field of view in several potentially dangerous areas using modern systems and technologies. Thus, in the short term, it will be possible to update the means of detecting a missile attack warning system, and to do so relatively quickly and cheaply. Thanks to the use of the VZG concept, all the works will be completed by the end of this decade, and not by a later date.