War in space as foreboding


Outer space is characterized by many aspects of use and military - is no exception. A single satellite image may contain overview information equal to one thousand images taken during aerial photography. Accordingly, space weapons can be used in the line of sight in a much larger area than terrestrial weapons. At the same time, even greater opportunities are opening up for space reconnaissance.

Greater visibility of near-Earth space (KP) allows global space monitoring of all areas of the earth’s surface, airspace, and outer space almost in real time. This makes it possible to instantly respond to any change in the situation in the world. Not by chance, according to American experts, in the preparatory period, space reconnaissance systems allow you to receive up to 90 percent of information about a potential enemy.

Geostationary radio transmitters located in space have half of the globe in the visible range. This property KP allows you to provide continuous communication between any receiving means on the hemisphere, both fixed and mobile.

Space grouping of radio transmitting stations covers the entire territory of the Earth. This KP feature allows you to control the movement of enemy objects and coordinate the actions of allied forces throughout the globe.

Visual and optical observations from space are characterized by the so-called supervisibility property: the bottom from the ship’s side is viewed to a depth of up to 70 meters, and in pictures from space up to 200 meters, with objects on the shelf visible. This allows you to control the availability and movement of enemy resources and makes useless means of masking, effective against aerial reconnaissance.

From observation to action

According to expert estimates, space impact systems can be moved from a stationary orbit to the point of striking objects on the Earth’s surface in 8 – 15 minutes. This is comparable to the flight time of submarine-launched ballistic missiles striking from the North Atlantic area of ​​the Central region of Russia. 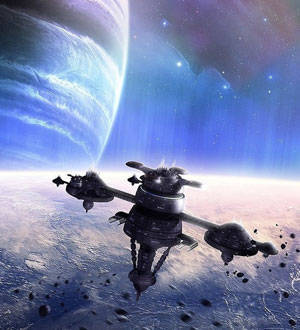 Today, the line between air and space warfare is blurring. So, for example, an unmanned aerospace plane Boing X37B (USA) can be used for different purposes: observation, launching satellites and striking.

From the standpoint of observation, near-Earth space creates the most favorable conditions for the collection and transmission of information. This makes it possible to effectively use information storage systems placed in space. The transfer of copies of terrestrial information resources to space increases their safety in comparison with storage on the earth's surface.

The extraterritoriality of the near-Earth space allows us to fly over the territory of various states in peacetime and during the conduct of hostilities. Virtually every space vehicle can be above the zone of any conflict and be used in it. In the presence of a group of spacecraft, they can monitor anywhere in the world constantly.

In near-Earth space (GST), it is impossible to use such a striking factor as usual weaponslike a shock wave. At the same time, the practical absence of the atmosphere at an altitude of 200 – 250 kilometers creates favorable conditions for using combat laser, beam, electromagnetic and other types of weapons in GFC.

Considering this, the United States, as early as the middle of the 90s of the last century, planned to deploy special space stations in near-Earth space around 10 equipped with chemical lasers up to 10 MW to solve a wide range of tasks, including the destruction of space objects of various purposes.

Spacecraft (SC) used for military purposes can be classified, like civil ones, according to the following criteria:

Ctrl Enter
Noticed oshЫbku Highlight text and press. Ctrl + Enter
We are
Weapons are prohibited. Part of 6: Nuclear weapons in spaceSpace systems of the US military communications: analysis of the state and development
Military Reviewin Yandex News
Military Reviewin Google News
17 comments
Information
Dear reader, to leave comments on the publication, you must to register.