Christian martyrs and priests of Sodom

August 21 2013
224
Today, Christianity is the most persecuted religion on the planet. Every year more than 100.000 Christians are martyred - according to the 1 believer, every 5 minutes. At the same time with the onset of sodomites and the development of a system of total control over society, a well-thought-out campaign is being launched to oust those who follow Christ, not only in word, but with their own life from public life. They are killed, pursued, driven underground. At the same time, “politically correct Christians” are being shoved into “public opinion”, like those priests who bless degenerates and crown pederasts, demonstrating their readiness to do everything that the “masters of discourse” - the priesthood of the new global Babylon-Sodom ...


Usually there are six countries where Christianity is the most persecuted. These are Saudi Arabia, Iran, Afghanistan, Somalia, Maldives and Yemen (several months ago, one of the newly converted Christians was publicly crucified in Yemen). However, this is not a complete list. In this list there are Maldives, where since 2008, the constitution prohibits non-Muslims to have the citizenship of the country, where public use of crosses and icons, religious sermons are prohibited by law. However, the list does not include, for example, Libya. There is no Egypt, where Islamists burn Orthodox Coptic churches and, from where, Coptic Christians flee persecution, including to Russia. There is no Iraq, from which Christians have been fleeing for many years, since the Islamists have declared them "legal victims" there. There is no Tanzania, where the sharply increased tension between Muslims and Christians in May 2013 led to an explosion during the Sunday service of a Christian church in the city of Arusha, causing dozens of victims. There is no Uzbekistan, where Christians in the spring of 2013 were forbidden to keep the Bible at home. There is no Indonesia, where from January 1999-th to January 2001 were killed more than 5.000 Christians, and more than 250.000 left their homes, fleeing from those who made them the condition "acceptance of Islam or death". There is no Nigeria - a country where more than 2013 Christians have been killed since the beginning of 800 and that as early as 1966 was the victim of a terrible slaughter that claimed the lives of thousands of followers of Christ from 50 to 100 (which led to the most bloody civil war of the second half of the 20th century, life to 3 million people, mostly Christians). 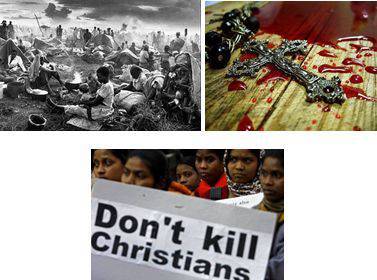 Refugee camp in tanzania. Rwandan Tutsi Christians who survived the 1994 genocide of the year, when Hutu mobs, instigated by the government and Western advisers, destroyed the machete and hoes 800.000. Christian

Particularly noteworthy is the absence in the list of Syria, where until the beginning of the revolt supported by the West only Orthodox were over 650 thousand, and in general Christians made up about 12-15% of the population. Now in some areas of the country gangs of insurgents are raging. Observers record "a huge number of incidents when Christians in Syria are killed, expelled, demand ransom, destroy their homes." But Syria has always been "an example of a fairly harmonious peaceful coexistence of a number of both ethnic and religious communities."

“Christians to the Cross” are calling for graffiti slogans in Syrian settlements captured by thugs supported by the West. For example, on the walls of the city of Homs, captured in the spring of 2012, from where militants of the oppositional Assad formations of the Independent Omar al-Farouq Brigade type or the London-based Syrian Observatory for Human Rights expelled almost 50-thousandth Christian community in few days, brutally killing over 200 person. In two years, dozens of churches were destroyed and blown up in Syria. As Catholic, like the temple in Deir ez-Zor, and the Orthodox, like the oldest monastery in the name of the revered and Christian by Christians and Muslims, Elijah the prophet in El Quseir.

Photo 1 - This is the way Yemen accepts Christianized Muslims. There, faith in Christ is considered the greatest crime and is strictly punished (ostensibly according to Sharia law).

Photo 2 - In Indonesia, captured Christians, if they refuse to convert to Islam, are beheaded

3 photo - Syrian Christian before and after many days of rape and torture, which she was subjected to by a gang of "rebels"

The Islamists kill the body, their Western masters - the soul. This is often done almost imperceptibly, with European thoroughness and thoroughness. Although sometimes takes frankly demonstrative form. The opinion is being introduced that Christianity bears the threat of European integration, since it contradicts the new “European values”, like same-sex “marriages”. Christians are defamed in the media. In European cities, hang up anti-Christian advertising. Under the banner of tolerance and political correctness, Christians are striving to oust society from all spheres of life — schools, the army, and the authorities.

At the beginning of 2013, Christian temples began to be demolished in France under the pretext of lack of funds for the maintenance of monuments. This began after President Francois Hollande announced the creation of a special agency to spy on the principle of separation of the Church from the state, and Interior Minister Manuel Valls announced at a press conference about upcoming reprisals against "religious extremists." Especially the French minister stressed that the repressions would be applied to groups like the Civitas and the Society of St. Pius X, who united traditionalist Catholics who did not recognize the decisions of the Second (ecumenical) Vatican Council. The French police were tasked with identifying "clerics who are a potential threat to the country's security." 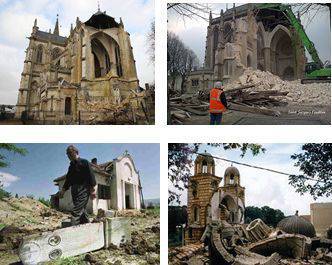 Photos of 1 and 2. Neogothic masterpiece - Cathedral of Sts. Jacob, who demolished the authorities of the French city of Abbeville, following the decision of the authorities of the European Union. At the site of the destroyed cathedral it is planned to build a casino complex (possibly with a fashionable brothel) for the VIPs of the European Parliament and the Brussels bureaucracy. During the demolition of the building, a crucifix was thrown into the dumpster, deliberately in front of many witnesses.

Photos of 3 and 4. Serbian temples in Kosovo.

The beginning of the attack on the church in France coincided with the abolition in official documents of the concepts of "father" and "mother" and the mass demonstrations throughout the country against same-sex "marriages". Although the demonstrations were dispersed by the authorities with tear gas, they showed that, despite the best efforts of the "European integrators", Christian values ​​are still significant for the French.

A similar situation takes place in Germany, where in the coming years they will be closed and given to restaurants, banks and commercial premises around the 700 temples, and in England, where they are already fired for wearing crosses and directly indicate the relationship between the government’s position on same-sex "marriages" and the beginning of the persecution of Christians. Former head of the Anglican Church, Lord George Carey, in late March, blamed the government of David Cameron for making Christians feel forced out of the blue. Meanwhile, in England, already around 20, thousands of schoolchildren who have not reached 11 years, have been included in the lists of so-called hate criminals for using the word "fagot" ...

Even in Catholic Poland, the local “Pussy Rayot” is tearing up on the stage Scripture and calling the church a “criminal sect.” And politicians are surprised at the “sudden phenomenon” of the anti-clerical Polish party Palikot (Ruch Palikota), famous for the fact that its activists are urging to remove the cross hanging from the parliamentary hall and that this party for the first time stories In Poland, a homosexual and “transsexual” pederast, who pursues his sexual orientation, ended up in parliament. This phenomenon is all the more surprising because Palikotu also lost a significant part of the traditionally conservative (“scleric”) peasant voters, whose leader Andrzej Lepper, who spoke in favor of improving relations with Russia and its neighbors in the East, was found hanging. Just before the appearance of the "Palikot phenomenon". 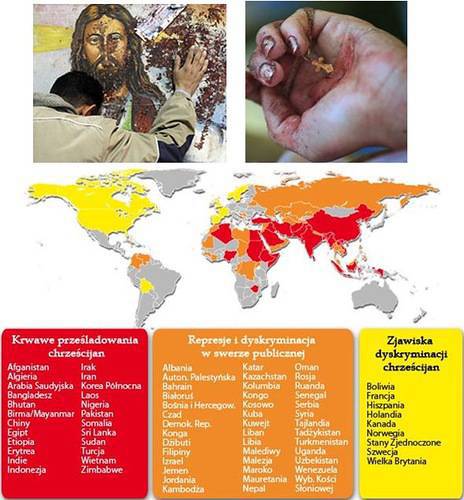 The attack on Christianity goes not only in Western Europe, but also across the ocean, where a ban has already been imposed on the celebration of Christmas and other Christian holidays.

Note that on the day of Orthodox Christmas (January 7) in some Western countries began to celebrate the holidays, rooted in pagan cults and superstitions, such as the worship of the Magi, the witch Befane (in Italy), etc. In recent years, this occult-pagan fad has been openly promoted. At the same time, the feast of the Nativity of Christ in every way is "modernized." For example, a few years ago, British citizens congratulated Christmas on TV on Christmas ... a veil Muslim! Since 1998, some municipal councils in English cities, such as Birmingham, have been trying to rename Christmas “vinterval” (winter interval). In Italy, the city council of Bologna ordered the inclusion of a statue of nude porn actress Moana Pozzi in the sculptural scene of Christmas in the square near the city hall building. Prior to this, the city decided to dress up the statue of the Mother of God in a mini-skirt and high-heeled shoes. Overseas at Christmas is prohibited as a mention of himself, and the display of Christian symbols. For example, the inscription “Merry Christmas!” Was removed from the Christmas platforms during the annual procession in Denver, which was attended by belly dancers and a legion of lesbians and homosexuals.

Meanwhile, in the United States, for the first time in its history, according to a study by The Pew Forum on Religion & Public Life, the number of Christians fell below 50% and continues to decline. At the same time, the counter process is gaining momentum - the number of those who reject Christianity to pink-blue foam on their lips is growing. In 2012, the administrations of a number of US schools introduced a ban on the mention of the "Almighty", "God", the use of the word "Christmas", etc. The curriculum is being revised, passages of a religious nature are excluded from textbooks. For example, in North Carolina, a school principal forced a 6-year-old student to remove the mention of God from a poem (“He prayed to God for peace, he prayed to God for strength”), which the girl wrote and wanted to read at the Veterans Day holiday. The New York Department of Education has also entered the "politically correct" war against Christians. Along with the prohibition of religious holidays and the removal of expressions “that can offend students” from the works of the classics of world literature, children are introduced to the habits of homosexuals, the words “dad” and “mom” are removed from the official circulation ...

We realize: new persecutions of Christians in attempts to eradicate the Christian faith are being coordinated today on a global scale. Like two thousand years ago, those who, seized by the elements of spiritual degeneration, cultivating superstitions, vices and evil, crave complete power over the world, preach hatred of Christianity. As then, the Christians of our day are increasingly becoming martyrs. As then, the blood of the martyrs gives birth to new confessors of the faith.

Ctrl Enter
Noticed oshЫbku Highlight text and press. Ctrl + Enter
We are
Martyrs of the 21st CenturyWhat you didn't want to know about England
224 comments
Information
Dear reader, to leave comments on the publication, you must to register.