Tolerance has won both Russian history and common sense. 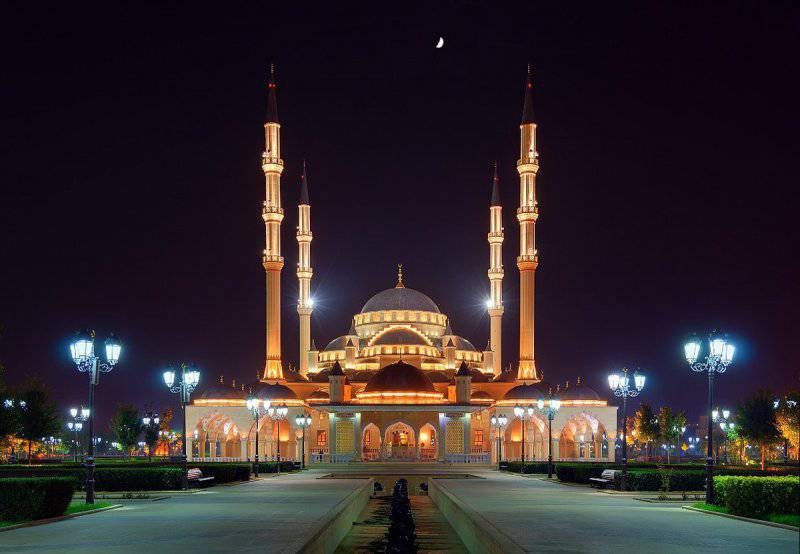 In former times, the expression “Moscow is the heart of Russia” was very popular. In the 19th century, it was more fully known: “Petersburg is the head of Russia, Moscow is its heart, and Nizhny Novgorod is the pocket”. It so happened that Red Square was called the heart and symbol of our country ... But it seems that those times have sunk into oblivion. Now we have another country, which has completely different characters.

The scandal around the Heart of Chechnya mosque continues to gain momentum in the blogosphere. Let me remind you that the mosque participates in the contest "Russia 10". Its meaning is to determine the greatest architectural monuments and sights of the country with the help of the voting of Internet users.

Thanks to the efforts of the current head of Chechnya, Ramzan Kadyrov, the mosque occupies the first place in this race, that is, in fact, claims to be the symbol of today's Russia. The logic of the Chechen leader is clear: the full name of this religious object is “The Mosque named after Akhmat Kadyrov“ Heart of Chechnya ”. The official description on the “10 Russia” website states: “The Heart of Chechnya Mosque in Grozny is one of the largest, most beautiful and majestic mosques in Europe and the world. 17 was opened on October 2008 of the year and was named after Akhmat-Khadzhi Kadyrov, the first president of the Chechen Republic. The mosque is located on the picturesque bank of the River Sunzha, in the middle of a huge park (14 hectares) and is part of the Islamic complex, which, in addition to the mosque, includes the Russian Islamic University. Kunta-Khadzhi and the Spiritual Administration of Muslims of the Chechen Republic. The mosque was built in the classic Ottoman style. ”

The Russian audience contrasts the mosque Kolomna Kremlin. However, he is still far behind in voting. At the time of this writing, 4 177 893 users voted for the mosque, Kolomna Kremlin - 3 749 691.

It is clear why the Chechen leader is trying. For Kadyrov, it is important to show how important the memory of his father is for him, and at the same time demonstrate the power of the republic’s leadership. But Russian public opinion takes the nomination of a mosque in the first place with a clear rejection. Built in the "Ottoman style" building reminds of the crisis of the modern Russian Federation and the Russian people.

Let me remind you that Chechnya is a state. So says the Constitution of the Russian Federation. More than 95% of the population of Chechnya are Chechens. After the well-known events of the 90-ies, not only Russians remained in the territory of the republic, but also Ingush who were related to Chechens. Chechnya is, in the full sense of the word, a national state of the Chechen people - mono-ethnic and rigidly defending the interests of ethnic Chechens. Let us recall, for example, the situation in the city of Pugachev, in which a certain head of the representative office of the President of the Chechen Republic in the Saratov region, Ahmed-Said Elesov, actively intervened.

On what basis did representatives of one subject of the Federation intervene in the affairs of another subject of the Federation, they did not explain to us. However, Kadyrov officially condemned the murder committed in Pugachev. But he is not only the formal leader of Chechnya, but also the Secretary General of the World Congress of the Chechen People, that is, the official leader of ethnic Chechens.

In other words, the “Heart of Chechnya” mosque pushes a full-fledged national state into first place in the competition. They are opposed to him simply by “Russian people” who do not have their own state. In fact, according to the official ideology, Russia is a state of 200 peoples. The Russian people is just one of them. So what, that Russian - 80% of the population of Russia and without our people, its stories and culture Russia is unthinkable? But the Russians are stateless people. It is absolutely impossible for the current Russian Federation to uphold the interests of Russians or give citizenship to Russians persecuted in other countries. In the same Central Asia, for example. And even for Putin to hold the post of general secretary of the World Congress of the Russian People, it’s even difficult to imagine.

Because the competition and causes such aversion. Of course, part of his role is the release of steam. Say, a big Internet scandal will distract the electorate from real politics. Previously, they argued over who the coolest ruler of Russia is Stalin or Ivan the Terrible. There were also big battles. People scratched their tongues so that they erased them into the blood. Not to mention the fact that such contests bring profit to the organizers. The cost of voting for the same heart of Chechnya mosque is 3 ruble with kopecks (it differs depending on the telephone operator). Consequently, more than 4 of the millions who voted for it gave the organizers more than 12 million rubles. Not a bad business!

But if you abstract away from the PR component of the competition, it is clear that he simply sharpens the old problems of Russia. Formal “multinationality” exists against the background of the non-recognition of the role of the Russian people. But at the same time with the multinational and non-recognition of Russians in the territory of the Russian Federation, there are 16 ethnic national states-republics that no one is in a hurry to recognize as multinational and who protect the interests of their ethnic groups.

This circumstance also generates tension in national relations, which is getting higher every year. The scandal around the “Heart of Chechnya” is only an external manifestation of the crisis of statehood.

This means that it will pass and be forgotten, but the problem will remain, no matter how the vote ends - with the victory of the mosque or the victory of the Kolomna Kremlin opposing it. The cause of the conflict is in the unclear status of the Russian people in Russia, in the absence of our Motherland, in the asymmetry of our federation. This problem will not go anywhere, even if the Kolomna Kremlin wins. Here is an open field for work, which is just beginning.

Ramzan Kadyrov called the possible victory in the competition of the Grozny mosque "the triumph of tolerance." And here it is impossible to disagree with him. It really will be a complete victory - and over Russian history, and over common sense ...

Ctrl Enter
Noticed oshЫbku Highlight text and press. Ctrl + Enter
We are
Who is interested in discrediting Ramzan Kadyrov?What you didn't want to know about England
Military Reviewin Yandex News
Military Reviewin Google News
297 comments
Information
Dear reader, to leave comments on the publication, you must to register.