The United States is increasing the park tvertoplanov 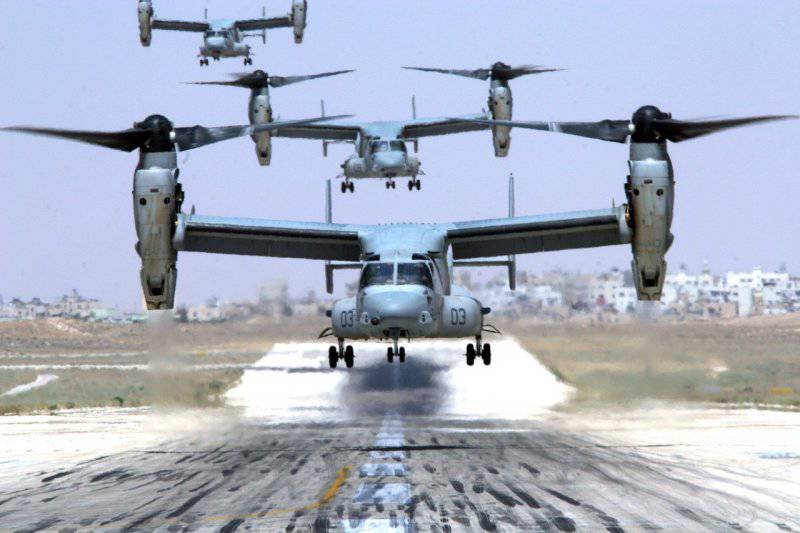 Bell and Boeing received a new five-year contract from the command aviation of the US Navy NAVAIR systems for the delivery of Osprey tiltrotors with vertical take-off and landing costing 4,9 billion dollars.


This contract is a further development of the basic agreement concluded on December 28 of 2012 worth 1,4 billion dollars, and provides for the supply of convertible planes within the 17-th production batch. The total value of the December and June contracts for the 2013 – 2017 period is 6,5 billion and provides for the production of the 17 batch of V-22 Osprey aircraft in 99 convertoplans, including 92 in the MV-22 variant for the Marine Corps (KMP ) and seven in the CV-22 version for command of the special forces of the US Air Force. According to the Pentagon, the contract for the period of 2013 – 2017 included an option for another 23 device, including 22 MV-22 and one CV-22.

Making a new five-year contract will allow the US Department of Defense to save one billion dollars compared to the cost of issuing annual contracts. All work on the supply of 99 rotary-winged cars must be completed in September 2019. In total, US forces are planning to purchase 458 convertiplanes, including 50 CV-22 for the Air Force, 48 MV-22 for the Navy, and 360 MV-22 for the KMP. The first five-year contract (2008 – 2012) for the purchase of X-NUMX convertiplanes worth 167 billion was issued to NAVAIR in 10,4 year. It provided for the purchase of 2008 MV-141 and 22 CV-26. The contract was later adjusted and five CV-22 and two MV-22 were added to it.

The X-NUMX convertible V-214 “Osprey” has been produced and is in operation of various modifications, which in total have flown almost 22 thousands of hours (according to other data, over 200 thousands of hours), and more than half of this time - over the past three years. As the magazine "Rotor & Wing", while the American convertibles have not reached high requirements for reliability. In particular, for one hour of flight of a device of this type, it takes about 185 hours of maintenance. Another issue for Osprey is the high price. Initially, Pentagon officials stated that the cost of one unit would be 18 million dollars, but in 58 the price of the product, including the Rolls-Royce engines, was 2012 million. The average cost of convertiplanes within the 67 production batch is 17 million dollars per unit, that is, it actually corresponds to the price of the device under the previous five-year contract.

Currently, the United States conducts an active marketing campaign to promote tiltrotor on the world market. Named, in particular, those countries that are negotiating the sale of Osprey: UAE (intend to purchase 10 devices), Israel (6), Qatar (12), Canada (12 – 15), Japan (6 – 10), Brazil (10). Requests for the provision of information on converters have also been received from the UK, Libya, Italy, India, Singapore and Australia. US Secretary of Defense Chuck Hagel has promised Israel 17 convertible plans, although it is not yet clear which Israeli production vehicles will be purchased by the Israelis and when the contract will be signed. At his press conference in Tel Aviv 22 on April, Chuck Hagel announced new shipments of weapons to this state, which include the Osprey V-22 and can make this country the first foreign importer of this type of device. According to the Israeli Air Force Command, convertible planes or convertible aircraft (PLA), a hybrid of an aircraft and a helicopter with turning screws, can completely change the tactics of combat operations in the region. As one of the Israeli pilots who performed familiarization flights on the Osprey tiltrotor in the United States, these devices would be especially useful when performing tasks for evacuating special forces and the wounded, who were deep in the rear of the enemy. In addition, convertiplanes could act very effectively in the interests of the Israeli Navy. The Israeli Air Force commanders recommended that the Defense Ministry leadership purchase a V-22 batch, including several convertible plans for special operations, and also lease six to eight ground forces vehicles.

The main feature of the convertoplan is a unique combination of helicopter and aircraft qualities. Thanks to the rotary engines mounted on the ends of the small wing, it can take off and land vertically. During takeoff, the axis of rotation of the rotors is located like that of a helicopter, and in the air it turns “along the flight”, and the convertoplane continues to move like an airplane. This technical solution, which provides for the transformation of a helicopter into a plane and vice versa, significantly increases the speed and range of flight compared to classic rotary-wing machines. At the same time, the stability of the submarine on transient modes is provided by automatic equipment.

Osprey can carry up to 32 fully equipped paratroopers or nine tons of cargo, with a maximum speed of 565 kilometers per hour and a combat radius of 720 kilometers.

Earlier, the company "Boeing" reported interest in the acquisition of American convertiplanes of Canada, Germany, Japan, Norway and the UK. Her partner in converoplane production, Bell, a company of Textron, reported that the global market for this type of aircraft can range from 10 to 12 to countries interested in using them in various operations, including combat humanitarian and special. The US military emphasizes that the adoption of the Osprey convertiplanes continues to transform the SSF of the CMP and the United States Air Force, which ensures the implementation of such operations that cannot be entrusted to conventional aircraft. The intention to realize the export potential of Osprey and deliver it to the allied countries is connected with the desire of the development companies Boeing and Bell to keep the production of these aircraft after 2018. Attempts to draw attention to the convertoplane have been undertaken by American firms over the past years, but potential customers are interested in the specific results of their combat use, which are not yet available, and the selling price and operating costs are alarming. While allies of the United States are eyeing convertoplanes, the flight squadron of US President HMX-1 received the first convertible glider MV-22 "Osprey". This machine is the first of the 12 PLA, designed to replenish the presidential squadron. MV-22 converters from the HMX-1 squadron in special color will be assigned the task of passenger and transportation to support the presidential helicopter (Marine One). At present, these tasks are assigned to the CH-46E Sea Knight Boeing-Vertol helicopters. At the same time, the President of the United States will not fly on board the MV-22 convertoplane, and only the President’s staff and journalists of the presidential pool accompanying the first person in the United States on his trips will become his passengers. The flights of the first convertible of the MV-22 squadron HMX-1 began on April 26, however, representatives of the presidential staff and journalists of the presidential pool will take on board no earlier than the end of this year.