Suvorov frontier. To the opening of the Russian military school in Transnistria 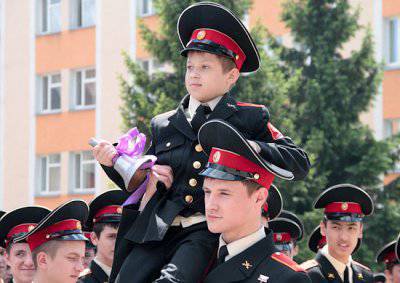 Coming 70 anniversary of the creation of the Suvorov military and Nakhimov naval schools. At a meeting of the organizing committee for the preparation of this date, Dmitry Rogozin made a very interesting proposal - to create a Suvorov School in Transnistria. And the meeting participants called for a detailed discussion of this possibility.


And indeed, in Transnistria, much is connected with the name of Alexander Vasilyevich Suvorov. In fact, the great Russian commander and Russian soldiers can be considered the founders of Transnistria. After the capture of Ishmael, Transnistria became the southwestern border of the Russian Empire. The Dniester Line, a series of fortresses erected at the end of the 18th century, almost coincides with the borders of the Pridnestrovian Moldavian Republic (PMR). The city of Tiraspol appeared as a fortress Sredinnaya, founded by order of Suvorov. Tiraspol is decorated with an equestrian monument to Suvorov with a hand raised to the sky - this is a symbol of Transnistria. And at the same time - a symbol of glory and power of the Russian Empire. Here once a Russian soldier stood at the intersection of Turkish and European interests. And here, under Catherine the Great, we asserted the frontiers of our empire.

The empire has had different times since then. It either expanded, it was on the verge of collapse, it came back in even greater power, then it fell apart again. But Suvorov abroad remained in place and, just as before, is faithful to his great country. By the way, since “the times of Ochakovsk and the conquest of the Crimea” in the Black Sea region, little has changed. There, as before, the interests of the West and Turkey are attacking the interests of Russia. And the Dniester line, built by Suvorov, is still like a bone in the throat of those who dream of our lands to bend under themselves, to include in their empires, to make their colonies. Even being in isolation, Transdniestria still marks the borders of the Russian empire and asserts its interests at the intersection of foreign interests. Suvorov frontier is waiting for the resurgent empire to return again.

Well, the appearance of the Suvorov Military School in Transnistria would be symbolic. This step would clearly show that Russia has not forgotten about its far enclave and will not leave its borders. We have already given up too much and too often gave up our interests and our territory. It's time to go back. In Transnistria, there are 170 thousands of our fellow citizens who do not suffer from a lack of patriotism and a desire to protect their land. These are our citizens and our land. And young residents of the PMR have the full legal right to study at the Suvorov Military School and become officers of the Russian Armed Forces. If the school is on the territory of the PMR, they simply will not have to go far from home for this. Yes, and then they can serve on their Suvorovsky turn.

Today, we did not even recognize the PMR as an independent state. Not to mention the reunion with our historical territory inhabited by our fellow citizens who themselves want reunion. Interfere with international organizations (such as the OSCE and observers from the US and the EU). They seem to be involved in resolving the conflict. But in fact, they prevent Russia from returning to the territories seized from it. That is, those who resist the strengthening of Russia have the opportunity to participate in the decision-making process on the fate of Transnistria. Such is international law and international obligations. They are interpreted by the strong countries freely, the weak obey the interpretation of the strong. That is life.

Suppose, for the time being, it is not expedient for us to openly conflict with international “regulators” of all kinds of conflicts. But it is also impossible to give up your frontiers to "partners". How to be?

It is necessary to change the situation in their favor gradually. Help your remote enclave. It is necessary to prepare “settlement partners” to ensure that sooner or later Transnistria will become part of Russia. It is impossible to let the reunification case go by itself - others will not be idle. It is necessary to strengthen its presence in the PMR. Not necessarily military. Here is the Suvorov Military School - this is an educational institution. Residents of Transnistrian Moldavian Republic can not only get a good education, but also find a job in their specialty. This is a real humanitarian assistance to the post-conflict region!

Of course, we need other humanitarian programs. The economic, cultural and political presence of Russia in Transnistria is necessary. Since November last year, the autonomous non-profit organization "Eurasian Integration" has been operating. It was created for the development and implementation of the program of material assistance for PMR - the construction, repair and equipment of kindergartens, schools, other educational institutions and the health care system. These are administrative functions. But nothing contradicts international law - pure charity, which is formally not the same as the allocation of funds to a subsidized region. If Western countries have long been practicing such “charity” and “development of democracy” all over the world - why can't we?

Since June 10, the law on the state border is in effect in the Transdniestrian Moldavian Republic. It fixes the territory covered by the state sovereignty of the PMR. This document was adopted by the PMR without agreement with the negotiating partners in the “5 + 2” format (international “traffic controllers”), but hardly without agreement with Russia. Of course, Chisinau does not recognize the sovereign status of Transnistria, as well as the “international community”. Well, it is not necessary. Transnistria has been an independent state for more than 20 for years, recognize it or not. Take it by force once did not work. Doomed to failure and a new attempt. Moscow can at any time declare Transnistria an independent territory and come to its aid by analogy with an attempt to seize South Ossetia. And limited access to the Transnistrian territory here will not be a principal obstacle, but only an additional complexity that will require appropriate steps to accomplish the task.

Ctrl Enter
Noticed a mistake Highlight text and press. Ctrl + Enter
We are
Armed Forces of Transnistria: 23 of the year since its foundationRogozin visited Nizhny Tagil, shot from a tank and a gun
28 comments
Information
Dear reader, to leave comments on the publication, you must to register.