"Russia can in many respects yield to us." A number of Kyrgyz politicians demanded “kun-ransom” from Moscow for the royal sweepers of 1916 of the year 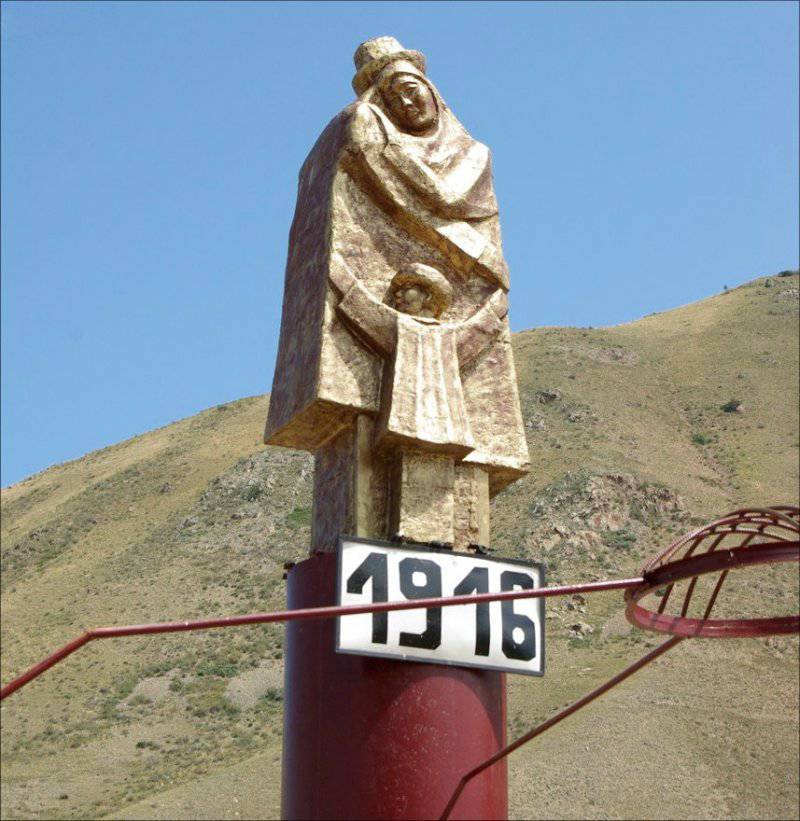 “My idea is picked up at the level of the masses”, the Kyrgyz politician Nurlan Motuev told the newspaper VIEW. Previously, a number of public organizations joined his calls to seek compensation from Russia for the events of 1916. However, local Cossack chieftains and experts doubt that Bishkek will decide to officially raise the issue of recognizing those events as genocide.


On Monday, Nurlan Motuev, one of the leaders of the party “The People’s Patriotic Movement of Kyrgyzstan”, called on the authorities to demand compensation from Russia for the events of 1916 of the year. He is confident that over time his initiative will be realized.

“Whatever idea we put forward in Kyrgyzstan, they immediately come to life. For example, the idea of ​​the first Kyrgyz revolution, our People's Patriotic Movement has advanced since 2000 year. In 2005, it came to life, Bakiyev took advantage of its benefits, ”Motuev told VIEW, reminding also that he was the first to call for the closure of the American base at Manas Airport in 2008.

Motuev recalled that it was he, who was also the first, two years ago, who had proposed recognizing the 1916 event of the year as genocide and demanding compensation from Russia in 100 billion dollars. However, he recognizes that compensation may be less - and will consist in writing off the debts of Bishkek, as well as in modernizing the Kyrgyz infrastructure.

“At first, my words were received with incomprehension, but in two years, probably, it reached the people. And once the idea rises, it will still come true. Initially, they were even perceived with condemnation, and now my idea is picked up at the level of the masses. Russia will have to seek some kind of consensus. Russia can in many respects yield to us: forgive debts, build a lot of things, ”the politician believes.

According to Motuev, the idea of ​​compensation for the 1916 events of the year is also secretly supported by the country's leadership, but does not voice it publicly.

“At the government level, they are afraid to say it because of political correctness or fear of Putin. But silently they support us, ”noted Motuev, assuring that, according to the results of opinion polls, which were held a year ago, 80% of respondents supported the idea of ​​paying compensation,“ or that Kyrgyz migrants are given special status in Russia. ”

Newspaper VIEW could not find reports of such a survey.

Motuev is convinced that such appeals will not reinforce Russophobic attitudes in society, because the Kyrgyz people “are mostly kind and decent, quiet, hard-working people”. “Many Russians, of which there are up to 5% in the republic, have dual citizenship. I noticed that they use Kyrgyzstan as a heavenly resort place. Mostly they live in Russia, and here they come to rest. If there is a reaction, it will not be to the local Russians, but to the Russian government, ”Motuev believes.

Recall that last week several social and political organizations of Kyrgyzstan adopted a resolution on the “massacre” of 1916. As the site 24.kg reported with reference to the newspaper Kyrgyz Tuusu, activists appealed to the president, the prime minister and the speaker of the parliament.

In the document, in particular, the events of the year 1916 called "massacre" and "genocide of Tsarist Russia against the Kyrgyz people." Activists are also calling for “raising the issue of compensation (kun-ransom) by the Russian Federation to Kyrgyzstan for innocently sacrificed (murdered) ancestors in the 1916 National Liberation Uprising of the year.”

The appeal was signed by the parties “Ui kuruuchular”, “Asaba”, “Kairan el”, “El Uchun”, public associations “Uluu Kurultay”, “Kyrgyz Chorolor”, “AKOS”, “Kyrk kyz”, movements “Lustration” and “Ashar” »And other organizations. However, none of them is represented in parliament.

Ataman: It was a marauder riot

The army foreman of the Semirechensky army, Alexander Yurasov, considers those events to be a marauding rebellion.

“It has already been proved that this insurrection was initiated from abroad - from Urumqi (city in China) - the main opponent of Russia in the war - by the German General Staff. The insurgency was provoked. The actions of the Cossacks were fully justified. It was the First World War. The same Cossacks were called up for military service. In the villages and in many villages of Russian immigrants only women, old people and children remained. Especially young people began to rob crops, villages and stanitsa, to kill civilians. As a result, the Cossacks were forced to intervene and suppress the insurrection, ”Yurasov told the newspaper VIEW.

According to Yurasov, nationalist organizations demand compensation, “which have long been said that Russia was an occupier, brutally exploited the local population and behaved worse than the British colonialists in India”.

At the same time, Yurasov is sure that in the leadership of Kyrgyzstan there are also those who share similar views.

# {ussr} “Without complicity with the authorities, this would not have happened,” the chieftain is sure. - An exhibition for the 100 anniversary of the uprising opened in Kyrgyzstan. There are no official accusations against Russia, but everything is filed in the same light that the mercilessly exploited Kyrgyz population was forced to go to the uprising. The local population was sent not to the front, but to work in the rear. And they refused, the more it was not free work. Would we, for example, be able to win the Great Patriotic War if there were not a strong rear? ”

Note that, according to the laws of the Russian Empire, the Christian peoples of the empire formed the basis of the tsarist army. Muslims (the Caucasus and Central Asia), including the Kirghiz-Kaysaks (Kazakhs) and the Kyrgyz, were not called in, and instead of conscription paid a special tax.

However, during the First World War, the royal government in June 1916 ordered to mobilize in Semirechye the indigenous male population from the ages from 19 to 43 years "to work on defensive structures and military communications in the area of ​​the army in the field." Riots broke out. In response, the tsarist administration called in punitive troops, including the Cossacks, and formed volunteer punitive detachments.

It is known that dozens of villages were burned, a large number of local residents rebelled were killed, more than 300 thousand Kazakhs and Kyrgyz fled to neighboring China. Several hundred rebels were sentenced to death, penal servitude and prison. The call was still thwarted, the government managed to send only about 123 thousand people for rear works instead of the planned 480 thousand.

In Soviet historiography, the uprising was considered a manifestation of the class struggle and the national liberation movement.

Recall, the Day of Remembrance of the Victims of the National Liberation Uprising 1916 of the year by the decision of the Parliament is celebrated in Kyrgyzstan on the first Friday of August. After the parliament in April 2008 made this decision, the Russian Foreign Ministry issued a statement in which it reminded that “we are talking about the victims of violent suppression of mass demonstrations against the tsarist regime on the territory of present-day Kyrgyzstan, during which thousands of Russians were killed settlers. "

The statement was kept in a delicate spirit. "In no way trying to interfere in the internal affairs of an independent and sovereign Kyrgyzstan, we would like to note that, in our opinion, making the public theme of 1916 of the year painful and sensitive to the public theme is counterproductive for the current friendly relations between our countries and peoples," Smolensk was noted at that time. square.

The word "genocide" has depreciated

Professor Alexei Malashenko of MGIMO, a member of the scientific council of the Carnegie Moscow Center, is convinced that the authors of the resolution need “fame and popularity”, in fact the appearance of the document will not change anything.

“In Kyrgyzstan now there is a tendency against extremely close cooperation with Russia within the framework of the Customs Union, so they found it possible to speak this way. But this does not mean anything and will not be supported. Local politicians will laugh there, ”Malashenko told the VIEW newspaper, adding that the word“ genocide ”is now devalued, they are called events when, for example, dozens of people die.

According to him, the organizations involved in the adoption of the resolution "are so exotic that no one will pay attention to this." “Such sentiments in society as a whole are not common. If they have any phobias, then against Uzbeks, for example. And who remembers that there was in 1916 year ... Only historians know this, ”said Malashenko.