August 20 2013
12
In the 1960-ies of the People’s Liberation Army of China (PLA) began to think about the transition to self-propelled artillery installations (SAU), which were to replace the towed artillery. As a result, at the end of the 60 of the last century, the Type 70 ACS, also known as the WZ302, was created in the PRC. This 122-mm self-propelled unit used the 122-mm howitzer Type 54, which is a copy of the Soviet M-30 howitzer, as a weapon. An armored personnel carrier type 63-I (B531) was used as a chassis. During the movement, the crew of the howitzer was inside the troop compartment, while the howitzer was loaded in manual mode without any protection. SAU Type 70 was released in a rather small series, the number of machines produced did not exceed 200 units.


When the PLA decided to acquire its own fully-fledged self-propelled artillery in the 1960s, the opinion of the military specialists fell on the Type 122 54-mm howitzer. It is worth noting that up to this point in service with the Chinese army there were only towed artillery systems for the most part Soviet-made. The Type 54 howitzer was a Chinese copy of the Soviet 122-mm howitzer M-30 of model 1938 of the year. After the end of World War II, with the help of specialists from the USSR, mass production of these howitzers and the entire range of ammunition was launched in China. For this reason, the choice of tools for the first Chinese self-propelled installation does not seem something strange.

Chinese engineers have kept the original shield howitzers. The gun was mounted in the open wheelhouse, the tower on the ACS was missing. In this case, if necessary, the back of the ACS could be covered with a canvas awning. The maximum range of the 122-mm howitzer with high-explosive fragmentation shells was 11,8 km. The howitzer had horizontal angles of 45 ° in each direction, the angles of vertical pickup ranged from -2,5 ° to + 80 °. The maximum rate of fire of the ACS. The 70 Type (WZ302) was 5-6 rounds per minute. 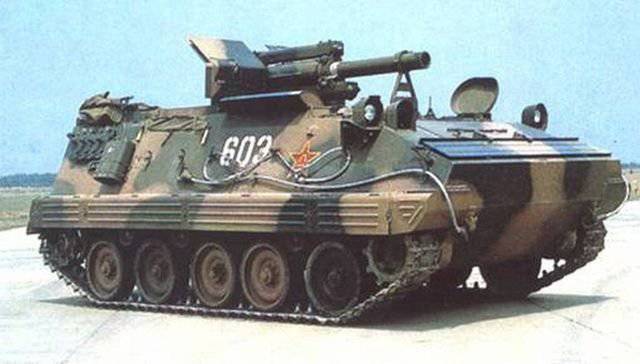 Total mobile ammunition was 50 shells. As an additional weapon on the ACS, an 7,62-mm machine gun was used, its ammunition consisted of 1000 cartridges. The ACS did not have an automated firing system, all combat processes and operations were carried out by the crew completely in manual mode. As ammunition could be used 122-mm fragmentation, high-explosive fragmentation, lighting, smoke and campaign projectiles. Also 122-mm ACS Type 70 could use a cumulative projectile with armor penetration to 200 mm and a direct shot range of 660 meters.

For the base for the new self-propelled artillery, the Chinese decided to take the chassis of the floating tracked armored personnel carrier of its own production "Type 63". The artillery unit was mounted in the aft hull on the site of the troop compartment. Chassis ACS Type 70 had on 4 rubberized support and 3 supporting the roller on each side. The rear wheel was guides, front - leading. The modernized ACS Type 70-1 chassis were arranged in a similar way, but the number of road wheels increased to 5 on each side, which led to an increase in its length. In this case, the first, second and fifth wheels from each side were equipped with shock absorbers.

The engine compartment and the control compartment of the ACS were located in the front of the machine, and the howitzer was mounted on top of the body in the rear. In front of the car, there were places for the driver and commander of the ACS. The driver was on the left and the commander on the right. Their hatches were made for them in the roof, as well as monitoring devices were installed. The driver's seat was equipped with an infrared night vision device. The rest of the self-propelled crew was located in the rear of the machine in the troop compartment. 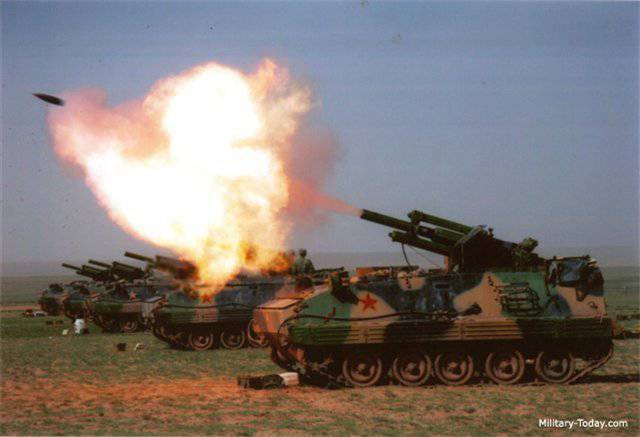 The body of the self-propelled gun was made of 12-mm armor plates. At the rear of the hull there was a door that provided access to the landing compartment. Through it, the loader got access to the gun and loaded ammunition. Due to the relatively high location of the howitzer's cradle, the angle of the vertical guidance of the gun was brought to 80 °. In the stowed position, the howitzer barrel was secured with a special locking support.

The engine was located in a compartment insulated by armored partitions behind the place of the self-propelled gun commander. The first self-propelled guns were equipped with a 6-cylinder diesel engine 6150L liquid cooling, which developed a power of 260 hp (235 kW) and was the modernization of the Soviet tank diesel V-2-34, which was installed on Tanks T-34. A little later, the engine was replaced with an 8-cylinder German-made BF8L413F air-cooled diesel engine. This engine accelerated the Type 70 self-propelled guns to speeds of 56 km / h when driving on the highway and up to 5 km / h afloat, the range was 450 km. Do not forget that the Type 63 was a floating armored personnel carrier. Overcoming water obstacles, Type 70 self-propelled guns carried out using special tethered pontoons.

In front, the self-propelled gun was covered with a curved shield of small size. During the march, the crew of the ACS was protected from light splinters and bullets of 12-mm armor. A door located in the aft body armor sheet was used to access the inside of the vehicle. At the same time, in a combat situation, when firing, the combat compartment opened from above protected the calculation only partially. Since the members of the calculation had to work, standing to their full height. In addition, the body of the ACS did not close tightly, which did not provide protection for the crew and the calculation of the use of weapons of mass destruction by the enemy. In fact, Chinese engineers recreated the artillery system from the time of World War II. Later, on the ACS, 2 of smoke grenade launcher units were installed (located side by side in the stern of the vehicle). 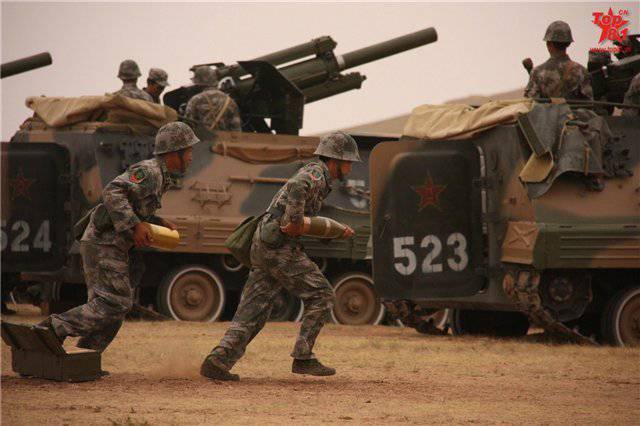 The crew of the car consisted of a 7 man (some sources indicated a 6 man): a driver, a commander, a gunner, and 4 loaders. Almost immediately after the creation of the ACS was upgraded. The upgraded version of the machine received the designation Type 70-1 (WZ 302A). This version was different from the original version of the elongated chassis, everything else, including the 122-mm gun, remained unchanged.

After a series of fairly small time-tested advanced version of the ACS was adopted by the Chinese army, however, due to the above disadvantages, this machine was produced only in a small series that did not exceed 200 units. Also in China, a variant of the WZ-302B was developed, which was distinguished by the presence of a tubular frame over the fighting compartment of the self-propelled gun, on which it was possible to stretch an awning to protect the calculation from the weather. Currently, all 122-mm howitzers Type 70-1 have been removed from service in the Chinese army. For export, these self-propelled artillery installations have never been supplied. 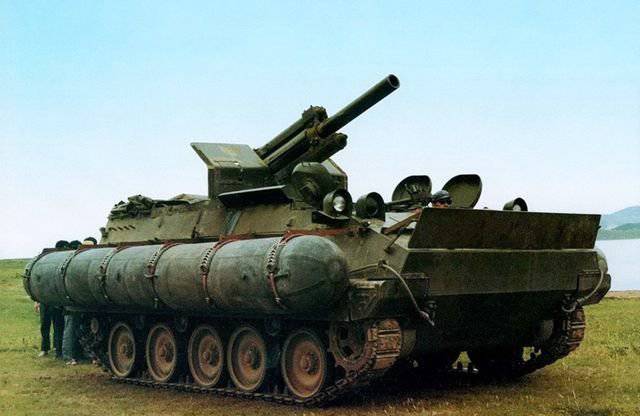