Syria was visited by a friendly delegation, and the "opposition" continues the attacks and sabotage

Receiving the guests, President Bashar Al-Asad thanked them for their support. He noted that the Syrian leadership welcomes all the constructive proposals concerning a political settlement of the current situation, but at the same time both the authorities and the people are determined to resist terrorism on their land, up to its complete eradication.

The head of state stressed that in the fight against terror, the most important thing is the unity of the army and the people. According to him, Syrians, both soldiers and ordinary citizens, “are full of life and faith in their homeland, despite all the suffering and pressure they face.” 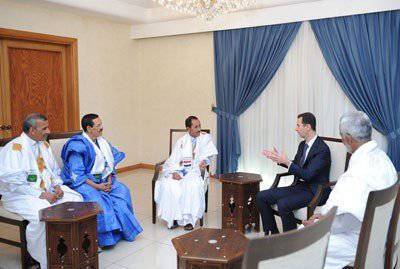 He highly appreciated the role of patriotic parties and public organizations from friendly countries, who tell their people the truth about what is happening in Syria and the region, expose the plans of enemies to divide the Middle East and incite hatred and conflicts.

The delegates, for their part, expressed support for the people, the army and the president of the SAR. According to them, anti-Syrian projects are contrary to the interests of all Arab peoples.

They added that they saw with their own eyes the situation in Syria, and it is not at all the same as many of the media, both Arab and Western, show it.
The Moorish also met with Prime Minister Wajl Al-Khalki, Chairman of the People’s Council Muhammad Al-Lyahham, the supreme mufti of the Republic of Badr-al-Dinn Hassun.

As the head of the Syrian government said at the meeting, "In the near future, the enemies will be defeated thanks to the resilience of the people and the valor of the army."
The head of the delegation, the Secretary General of the Social Democratic Unionist Party of Mauritania, Mahfouz Ould Laziz, stressed that the purpose of the visit is to express solidarity with friendly Syria and its people. "The criminal rulers of the Gulf and the terrorists are seeking to destroy peace-loving Syria, but she will emerge victorious," the politician expressed confidence.

Thus, despite all attempts by the West and its puppets in the region to isolate Syria and the head of state personally, this cannot be done. All honest people, politicians, journalists, public figures, who come to the country, are convinced of the correctness of its cause. And break through the blockade.

Unfortunately, one has to report not only joyful events like the visit of friends to Damascus. The bandits, called "oppositionists", continue to do their terrible, bloody crimes against the Syrians.

For example, in the province of Homs near the castle Krak des Chevaliers, in the area of ​​the villages of Al-Khvas-Al-Nasser, militants staged a massacre, which resulted in the death of 11 people, including a young girl.

Also in the province of Homs, Ashrafiyah was subjected to mortar shelling. One of its inhabitants died, several people were injured. Destroyed houses.

In the province of Damascus, terrorists fired at a car, killing a civilian.

In Damascus itself, in the Bab Sharqi quarter, gangsters fired mortar shells at a residential building, two people were injured. In the duel quarter, a dairy plant was fired, and only miraculously there were no casualties.

As a result of a similar crime in the Midan quarter, four children aged between 6 and 11 were injured while walking in the park.
In Aleppo, militants fired at a city stadium. Several citizens injured.

In the province of Aleppo in the village of Bayanun, bandits seized the school and tried to turn it into a headquarters. But the army team knocked them out.

Terrorists are at war with both civilians and the country's economy. Over the past 3 of the day, there have been several major sabotages against infrastructure facilities.

Thus, in Hasaka province, a fuel depot of a state-owned fuel company was attacked. Damaged diesel fuel tanks, fire broke out. Militants fired on the fire brigade arrived at the scene, and only miraculously there were no casualties. Despite the danger, firefighters honestly and courageously fulfilled their duty.

In the province of Damascus, there was a major sabotage on the gas pipeline, which fed the 3 power station. As a result, many residents of the provinces of Daraa, Suweida, Kuneitra and Damascus were left without electricity. Repairmen quickly responded and went to work. The fuel supply to two of the three power plants, Naseriya and Tishrin, was restored.

In the province of Homs, in the Umm At-Tababir area, bandits also attacked the gas pipeline to the Ebla gas processing plant. The consequences of sabotage quickly eliminated.

In the province of Deir ez-Zor at one of the railway stations was loading gas cylinders with domestic gas. The terrorists attacked the station, causing a fire. Domestic gas due to the efforts of the "opposition" is a deficit for the Syrians.

19 August on the planet celebrate World Humanitarian Day. In Syria, it has acquired particular relevance, since in the present difficult conditions it is impossible to overestimate the efforts of people who selflessly help their neighbors.

During the terrible years of the pseudo-revolution that was tormenting the country, many volunteers performed real feats, delivering humanitarian aid to those in need in “hot spots”, often at the risk of their lives.

Now, due to the efforts of terrorists and those who support them, in dangerous areas, even milk for children has become a luxury, and it has to be delivered at great risk. The gangsters more than once and not two attacked convoys with humanitarian aid, robbed them, killed or beat accompanying men. Often then the army, taking by storm the underground tunnels dug by the militants, found there not only warehouses with weapons, but also the looted humanitarian aid - products, medicines, medical equipment.

Volunteers are often threatened, and scary, if the case is not limited to threats. So, recently, the whole of Damascus was shocked by the murder of 23-year-old girl Vala Al-Youssef with her father, mother and two sisters in the Rukn-ed-Din quarter, when only a little brother of the volunteer-activist remained in the neighborhood who managed to hide. The rest were found with a slit throat.

Despite all this, Syrian volunteers stood the test and helped millions of people.

For example, the organization “Kura Al-Atfal” (“Children's villages”) distributes products, clothes, toys to children, provides psychological support to children. A new school year is approaching, and the organization’s volunteers are preparing a campaign to provide school supplies for children who are in temporary accommodation centers so that they can learn.

Volunteers also hold actions honoring the wounded military, the families of the victims. So, in the province of Tartus held a similar event. The wounded soldiers, as well as relatives of the fallen, thanked the organizers of the ceremony, saying that the attention given to them by the public, gives strength and courage in the fight against terrorism. One of the soldiers, Ahmad Issa, in his speech stated that, despite the fact that he had been wounded in the arm, he intended to return to the army and continue to fulfill his duty.

Volunteer actions enjoy the full support of the Syrian authorities. And at this ceremony in Tartus made the governor of the province of Nizar Musa. He noted that such ceremonies are very important, but this is not the only thing that needs to be done for these people. He assured that local authorities will assist relatives of the fallen defenders of the Motherland. A similar action took place in the province of Latakia.

A group of chemical weapons experts arrived in Syria

A group of international experts led by the Swedish professor Oka Selstrom arrived in Damascus to investigate the use of chemical weapons in Syria.

So, 19 March in the province of Aleppo in the Khan Al-Asal district, the so-called "opposition" used a chemical warhead missile, as a result of which dozens of people were killed and injured. The Syrian side immediately appealed to the UN to investigate the incident. But the United States and the parties obedient to them in this international organization did everything to thwart the investigation. Thanks to Russia's diplomatic efforts, a group of experts still - after 5 months - headed for CAP. Earlier, on July 19, Permanent Representative of the Russian Federation to the UN, Vitaly Churkin, handed over to the UN Secretary General Ban Ki-moon and a report on the expertise of Russian specialists in Khan al-Asal near Aleppo. Samples taken according to all the rules showed that the "opposition" used sarin, and the warhead was a handicraft.

The bandits did their best to disrupt the investigation. The apotheosis of such actions was the recent massacre in the Khan Al-Asal area, when hundreds of soldiers defending the area and its civilians were killed. Including - witnesses of the use of pseudo-opposition chemical weapons.
But the political games of the West around this investigation continue. It is clear that the opponents of Syria will continue to make every effort so that the truth does not reach the world community.

As stated by Russian Deputy Foreign Minister Gennady Gatilov, having given permission for the inspectors to come, the Syrian side is demonstrating its readiness to clarify the issue of the use of chemical weapons.

In addition to Khan Al-Asal, the experts intend to visit three more points where, as the “opposition” says, the authorities allegedly used such weapons. But the SAR government does not "play" in the dark - unlike the terrorists, who did not disdain to shed the blood of hundreds of people just to try to hide the truth.

I would like to hope that the commission includes honest experts who do not “draw” the result needed by the United States and the West. But, I suppose, they are under terrible pressure. Like all previous observers - both from LAS and the UN - who were in Syria. They all saw the crimes of terrorists and what the army was fighting against. But they were forced to turn down their missions. LAS observers - under the onslaught of Qatar, and observers from the UN - under pressure from the United States and the West.

Ctrl Enter
Noticed oshЫbku Highlight text and press. Ctrl + Enter
We are
Bashar al-Assad: In Syria, not the “revolution” that the enemies are talking about, but the revolution of the army and the people against terroristsSyria: Americans scare themselves, and Asma Asad buys chairs
Military Reviewin Yandex News
Military Reviewin Google News
34 comments
Information
Dear reader, to leave comments on the publication, you must to register.