Saudi Arabia against the USSR and Russia

Speaking of the enemies of the Soviet Union, the United States, Great Britain, other NATO countries recall, but they forget such a country of the East as Saudi Arabia. And in vain, Riyadh was and continues to be the enemy of Russia and the Russian people.


The Soviet Union was the product of a great project that could lead to the creation of a new humanity, symbolized by a giant with the face of a thinker, a powerful hand throwing a satellite ball into space. Russia-USSR was the first power in the world to propose to humanity a project for a just and reasonable society of the Future, free from parasitism, exploitation and oppression of some people by others. In many ways, such a society was shown in the genius novel of the Russian philosopher-cosmist, writer Ivan Antonovich Efremov “The Bull Hour”. The man of such a society is energetic, powerful, physically and intellectually developed, good-willed. He penetrates the secrets of the cosmos, knows the energy of the atomic nucleus and the secrets of the human psyche. The man of the future builds an underwater city and spacecraft, develops the Moon and Mars, goes beyond the limits of the Solar System. The man of the socialist future of mankind has a goal, like that of all mankind His present is not flawed, like a modern person, whose life is determined by the search for pleasure (hedonism) and consumption.

With all its flaws, caused by the withdrawal from the main road to a bright future, after the death of Stalin and the betrayal of Khrushchev and part of the Soviet "elite", the Soviet Union 1970-1980-s carried the most powerful charge of bright energy, the germ of the Future of all humanity. In the Union, the sprouts of the greatest breakthrough of humanity in the next era, the cosmic one, appeared. This possibility caused panic among the rulers of the Western world, who control a large part of the planet through finance, economy and military technology. For centuries, the masters of the West built a completely different world — a slave-owning civilization, where all the blessings belong to a handful of rich people, and most people exist in constant need, exhausting work, fear and suffering (in the terminology of Efremov, inferno world). “World backstage” built the world order, like a global pyramid, where at the top are “masters of life”, at medium levels, presidents, governments, deputies are “overseers”, below are “slaves” who have different illusions as chains the race of consumption, the search for new and new pleasures, the financial and credit system, etc.

Naturally, the rulers of Western civilization did not want to lose and lose power over humanity, to go into oblivion. Therefore, the forces that were dragging humanity back into the past, dreaming of a neo-slave system, where high technology would be available only to the “elect”, threw all available resources and resources against the Soviet civilization bearing the germ of sunny Tomorrow. From the point of view of cosmic philosophy, it was a struggle between the forces of Light and darkness (inferno). The union of the forces of darkness was very heterogeneous, there was also the Vatican, which had centuries of experience in fighting the Russian state, and the USA, where various Masonic orders and Christian Protestant fundamentalists and Muslim Pakistan and Saudi Arabia had great influence.

Saudi Arabia played a major role in the fight against the USSR. The third Saudi state was formed with the support of the British Empire. In 1938, huge oil fields were discovered in Saudi Arabia. Already in the 1930-ies in the territory of Saudi Arabia acted Standard Oil Company of California, which was part of the "empire" of the Rockefellers. In 1940, the United States and Saudi Arabia established full diplomatic relations. The United States took into account the strategic position of Saudi Arabia, the religious factor, the most important religious centers of the Muslim world - Mecca and Medina and the possession of the world's largest oil reserves are located on the territory of the state. In turn, the Arab monarchy needed a strong patron, wanted to weaken the influence of Great Britain in the region, and it needed capital investments to develop the oil industry.

In 1943, US President Franklin Roosevelt included Saudi Arabia in the Lend-Lease program. In 1944, the Secretary of State presented a number of projects to expand American long-term financial assistance. To meet the immediate needs of Saudi Arabia, it was proposed to provide a loan in the amount of 43 million dollars for a period of 5 years. The Export-Import Bank of the United States was to provide funding for joint US-Arab projects in various fields. The command of the US military was to begin building airfields and related communications, infrastructure, and also send military advisers to train the Arab army and create strategically important military facilities. In February 1945, the leadership of the State Naval Coordination Committee (SWNCC) informed Roosevelt about the results of the work done. The American president was offered to carry out a complete modernization of Saudi Arabia, which required about 28 - 57 million dollars for the period of 1945-1950. The US military had to build airfields and a network of modern roads. The United States provided the Arabs with money for the development of the oil industry. The State Department stressed the strategic importance of Saudi Arabia’s territory, the air routes through it, and the value of Middle Eastern oil for the US military.

In February 1945, after the end of the Yalta conference, Roosevelt met with Saudi King Abdulaziz ibn Saud. The negotiations took place on board the American Quincy warship in the Suez Canal. On the ship was contracted. "Quincy Pact", the agreement giving the US monopoly rights to oil Saudi Arabia. American companies received a monopoly on exploration, development of fields and the purchase of oil. As a payment, the Saudis were promised a security guarantee against any external threat. US economic assistance has become key to the development of the kingdom’s oil sector. The oil of Saudi Arabia and the Middle East region as a whole has served the United States as the basis for the implementation of the “conservation theory”. Since 1948, US imports of crude oil and petroleum products for the first time exceeded US exports. Actually American oil fields were subject to conservation, to preserve domestic reserves for the future. 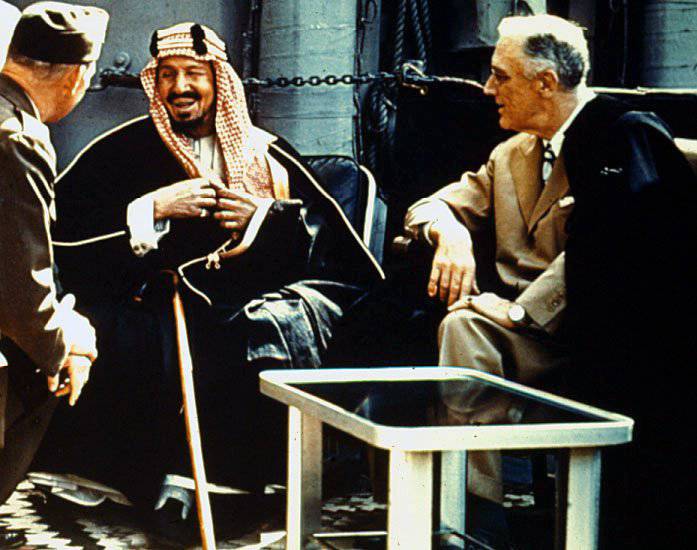 Initially, oil revenues went directly to the royal family. However, as profits grew, money flowed into the state treasury. Saudi Arabia has become the richest state in the region. And King Abdul-Azis made a huge fortune, which in 1952 was estimated at 200 million US dollars. Saudi Arabia was a very peculiar state - a quarter of the explored reserves of “black gold” on the planet made it one of the richest countries in the world, the world center of the Islamic religion, the keeper of Muslim shrines that attract hundreds of thousands of pilgrims and absolute monarchy, where all power belongs to the king. The official religion in the country is Islam in the form of Salafi (Wahhabism). There are Sharia norms in the country, and their violators may incur severe punishment, including cutting off the head.

This "oil barrel" under the rule of religious fundamentalists and became the trump card of the United States and the masters of the West in the struggle against the USSR. The United States retained its influence in Saudi Arabia in the 1950-1960-s, and in the 1970-s their union received a new breath. In 1973, the famous oil crisis occurred when the Organization of Arab Petroleum Exporting Countries (OAPEC) declared during the October War between a number of Arab countries, on the one hand, and Israel, on the other, that it would not supply oil to the states supporting the Jewish state. As a result, the price of oil soared from three dollars to twelve dollars per barrel. This event revealed the true scale of the dependence of the countries of the world on the “oil needle” and led to an increase in the export of oil to the West from the USSR. The Soviet Union won tactically, but lost in the strategic, instead of developing breakthrough technologies and investments in the future, the country began to get used to the “easy money”. The embargo did not last long, but it was enough for significant consequences. In particular, in the US, oil companies, under the pretext of rising costs, have significantly increased the prices of all types of fuel, and consumers have seriously suffered.

The golden stream to Saudi Arabia has grown significantly. The binding of the Saudi elite to a luxurious life has become even stronger. Wealthy Saudis bought luxury cars, furnished Western-style houses, traveled around the world, joining the entertainment of the Western elite. At the same time, part of the country remained in the Middle Ages. Washington came up with a plan for how to use Saudi Arabia against the USSR and at the same time make money. Almost immediately after the lifting of the embargo, the Americans began negotiations with the Saudis and offered them guarantees of military security, technical support, military equipment, training of specialists and modernization of the country. Arab billions were transferred to the United States. This ensured the safety of the income of the Saudis and profits. Saudi Arabia bought US securities - government securities and corporate shares, receiving interest on investments. The result was a very profitable process for the United States: money for oil was being returned to America. In addition, the Americans, with the money of the Arabs, created modern infrastructure in the country - European cities, oil refining capacities, ports, airfields, roads, pipelines, power grids, etc. In the cities, service facilities appeared - hotels, hotels, shops, entertainment and shopping centers piled with goods from around the world, etc. At the same time, the Saudis did not even have to work for themselves — thousands of incomplete workers from other Arab countries, Southeast Asia, began to work for them. Saudi Arabia received security guarantees against a possible threat from the more militarily powerful neighbors — Iraq, Iran, Syria, and Israel.

Ctrl Enter
Noticed oshЫbku Highlight text and press. Ctrl + Enter
We are
Sons of ivanToday 79 would be the first man who flew into space - Yuri Alekseevich Gagarin
Military Reviewin Yandex News
Military Reviewin Google News
43 comments
Information
Dear reader, to leave comments on the publication, you must to register.