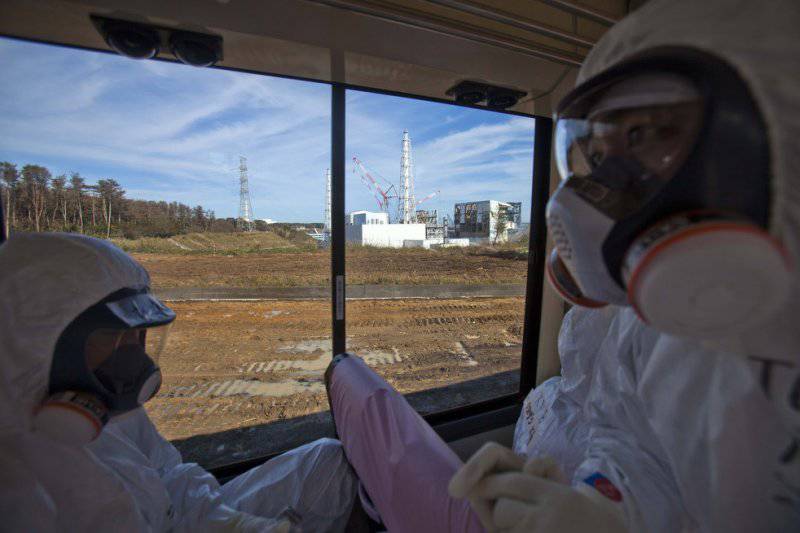 Nuclear catastrophe associated with the accident at the Fukushima-1 nuclear power plant continues to develop in Japan. Lying and silencing the real facts of this disaster over the past two-plus years have become the norm for Japan. The Japanese authorities began to lie as soon as they said that nothing terrible had happened, and they immediately evicted people for the 8 kilometer zone, and then for the 20 kilometer zone.


As the world press reported recently, referring to the Japanese energy company Tokyo Electric Power (TEPCO), the protective barrier at the technical port of Fukushima-1 NPP is no longer able to cope with leaks of radioactive water into the ocean. The level of polluted groundwater under the territory of the nuclear power plant has now already at 60 cm exceeded the protective barriers that have been erected along the entire coastline of the port. Simply put, radioactive water just pours into the ocean. According to experts, about 300 tons are poured into the ocean per day. For the first time, TEPCO has admitted leaking radioactive water from the territory of the Fukushima-1 nuclear power plant to the Pacific Ocean in late July. The Japanese government instructed the NPP operator to take urgent measures to prevent the leakage of radioactive water.

According to experts, at least 20 thousand tons of “dirty” water accumulated in the drainage system of the nuclear power plant. And in the basements of the power units, the drainage system and in special tanks on the territory of the NPP, more than 360 thousand tons of water with different degrees of contamination accumulated (as of March 2013 of the year). According to measurements in one of the drainage tunnels, the content of radioactive cesium in water reaches 2,35 billion becquerels per liter of liquid, at the international standard in 150 becquerels. According to the data of TEPCO experts, water from the Fukushima-1 drainage tunnels constantly flows out through cracks and enters the groundwater, replenishing them with a large number of radioactive substances.

For more than two years, the Japanese, whom our Westernized intelligentsia considered to be a super-technological nation, foul the World Ocean. In a simple way, the truth is that the Japanese pour water onto the unassembled ruins of the reactor, the water receives a huge charge of radiation and pours into the ocean. And this water flows from the very beginning of the disaster. From the very beginning, the Japanese did not begin to solve the problem, as it should be - to eliminate the accident, that is, to build huge burial grounds of varying degrees of protection, to attract a lot of equipment and people (obviously doomed to receive a certain dose of radiation) and “clear the territory”. The Japanese chose the second option, to create external activity, while practically nothing really to do. While the radioactive water was pouring into the sea in hundreds of tons, the Japanese talked about the “heroic struggle” with the consequences of the accident. Apparently, this will continue.

Is it dangerous? Given the vastness of the Pacific Ocean, the danger is minimal. True, this does not mean that someone can get into the "statistics" of accidents. So, about two years after the accident, the operator of the company TEPCO caught fish, sea bass, which had 254 000 becquerels per kilogram of weight, which exceeded Japanese radiation standards 2500 times.

The insignificance of the accident for the entire planet, and it can withstand more than a dozen of Hiroshim and Fukushima, does not cancel the responsibility of Japan for the pollution of the ocean and the concealment of information from its own population and all of humanity. The Japanese authorities for more than two years hide the truth about the accident from the world community. By lulling people with words about the construction of cooling systems, barriers, etc. The UN and the IAEA help them in this matter. Considering how the world community criticized Moscow for Chernobyl, although there they really struggled with the accident, the situation looks even more disgusting. This is an example of a policy of double standards. Japan, as an ally of the West (USA), is covered. For two years, radioactive water from the Fukushima nuclear power plant-1 poured into the ocean, and the management company TEPCO only now recognized this fact. And only now the Japanese authorities and the company itself “saw the light” and attended to the creation of protective barriers.

Although alarming data came before. Already in 2011, the report from the research group at Stanford University and the Stony-Brook University School of Marine and Atmospheric Research (New York) reported that leaks of radionuclides into the ocean are of concern at both the local and global levels. The report reported that radioactive elements were found in Pacific bluefin tuna, which is distributed throughout the North Pacific. Scientists have found elevated levels of cesium-134 and cesium-137 in tunas caught off the Californian coast. The researchers noted that other large animals that use the waters around Japan can bring radionuclides to areas of the northern and southern parts of the Pacific Ocean. In addition, American scientists have noted the increased content of beta radiation in the air on the Pacific coast of the United States. Researchers Joe Mangano and Janet Sherman discovered radioactive fallout, including radioactive iodine, especially the five US states were affected. Within a few days after the accident at the nuclear power plant, the concentration of iodine-131, which fell in the United States, exceeded the world standard by a factor of 211.

The site of the US Environmental Protection Agency reported that in June 2013, the Japanese company TEPCO recognized the presence of highly radioactive strontium-90 (a product of fission of uranium and plutonium) in groundwater under a damaged reactor. Tritium was also found in the water. But then the general manager of the Japanese company Toshihiko Fukuda said that the contaminated water with strontium-90 does not fall into the ocean. According to the Japan Today National newspaper, between the end of 2012 of the year and May of 2013 of the year, the level of strontium-90 in groundwater near the turbine of reactor No. 2 increased more than 100 times: from 8,6 Becquerel to 1000 units per liter of water (maximum allowable level is 30 of Becquerel ). In the water, found and the beyond-limit levels of tritium - 500 thousand Becquerels per liter.

The situation around Fukushima itself revealed several important facts. Firstly, the Japanese are no more perfect in the field of high technologies than other nations. Secondly, they preferred to hide the truth not only in the USSR (recalling the Chernobyl tragedy), but the “highly developed” East and West. Japanese authorities, representatives of the management company, officials of the United Nations, WHO and the IAEA have lied and continue to lie. Moreover, in the USSR they really struggled with the problem, while in Japan they preferred to talk about it.

Ctrl Enter
Noticed oshЫbku Highlight text and press. Ctrl + Enter
We are
Situational analysis of the death of the MH17 flight (Malaysian Boeing 777), made on the basis of engineering analysis from 15.08.2014Fukushima: blood and radiation
Military Reviewin Yandex News
Military Reviewin Google News
155 comments
Information
Dear reader, to leave comments on the publication, you must to register.