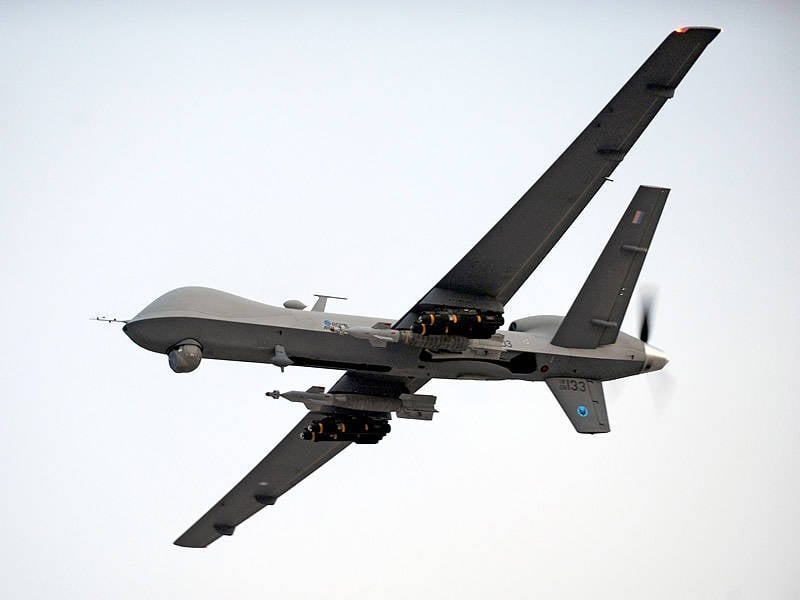 The company General Atomix Aeronautical Systems GA-ASI (General Atomics Aeronautical Systems Inc) is in talks with the company Raytheon about equipping an unmanned aerial vehicle (UAV) Riper (MQ-9 Reaper) with air-to-air missiles "AIM-9X Sidewinder" (Sidewinder), AIM-120 AMRAAM (Advanced Medium-Range Air-to-Air Missile) and anti-radar missiles (PRR) AGM-88 HARM (High-Speed ​​Anti-Radiation Missile). There are no plans to conduct any tests, but an initial design, initiated at the request of the customers of these devices, is being conducted.


According to the representative of GA-ASI, at the expense of the company's own financial resources, work is underway to create an onboard radar station (BRLS) for the MQ-9 UAV with active phased antenna array (AFAR). Only the most modern fighters are equipped with such a radar with AFAR.

The presence of a radar with AFAR aboard the MQ-9 UAV can provide warning of the possibility of a collision in airspace with aircraft. Ensuring such a possibility is the main requirement for UAVs in the case of permission to fly in airspace in accordance with international safety standards. At the same time, a radar with AFAR has various functions and can carry out target designation of attacking air-to-air missiles, search for ground targets and even jamming enemy radar facilities.

Equipping an MQ-9 UAV with air-to-air missiles and a radar with AFAR can provide operations against other UAVs. In particular, MQ-9 in this configuration will be able to counteract enemy unmanned vehicles approaching warships of the US Navy in the Persian Gulf.

The MQ-9 BLAH has a payload of 680,3 kg, which it can carry on the underwing pylons, which is more than enough for installing air-to-air missiles and for anti-personnel missiles AGM-88 HARM, which can be used to suppress enemy air defense radars .

The developers of the device are also considering the possibility of integrating Link-16 (Link 16) data line onboard UAV equipment, which will allow the MQ-9 to transmit target designation data and coordinates of objects to manned aircraft located in the target area.

One of the obvious advantages of this technical solution is that the inconspicuous fighter type F-22 "Raptor" (Raptor) will be able to receive target designation data from the MQ-9 UAV even without the inclusion of its radar.

According to experts, the discussion of the possibilities of equipping the UAV MQ-9 with air-to-air missiles is associated with the intentions to expand the spectrum aviation means of destruction of unmanned vehicles of this type. This task continues to remain relevant since the mid-90s, when the predecessor of the MQ-9 Reaper UAV, the MQ-1 Predator, entered service with the US Department of Defense.

More than 10 years ago, GA-ASI began to arm the MQ-1 UAV with AGM-114 Hellfire air-to-surface missiles.

The possibility of arming the UAV with air-to-air missiles was later realized. In December 2002, a few months before Operation Freedom for Iraq, the USAF armed the MQ-1 UAVs with AIM-92 Stinger missiles of the Raytheon company and began using them for reconnaissance flights in the airspace above Iraq closed for flying. In one of these flights, the MQ-1 UAV was shot down by an Iraqi MiG-25 fighter, although the latter has higher speed and maneuverability compared to an unmanned vehicle. According to the results of this combat episode, the US Department of Defense considered that the goal was achieved and Predator could effectively use air-to-air missiles. First of all, when performing tasks to combat the UAV of the enemy, the probability of damage to which both with the use of Predator devices and Riper vehicles will be higher.