Operation "Storm". Destruction of the Republic of Serbian Krajina. Part of 2


At 2 on the morning of August 4, the Croatian authorities officially informed the commanders of the peacekeeping contingent about the start of the operation. The commanders of the peacekeeping sectors were also notified, and they, in turn, reported the impending attack to the Serbs. The UN troops, which were supposed to stop the aggressors, missed the Croatian units without any obstacles. Only in some places did misunderstandings arise. Some UN soldiers were captured and used as human shields, observation points were fired upon, several peacekeepers from Denmark, the Czech Republic, Nepal were killed and wounded.

On 5.00 in the morning of August 4 1995, the Croatian army launched Operation Storm. It began with a massive shelling and attack of the Croatian Air Force at the command posts of the armed forces of the Republika Srpska Krajina. In addition, a number of objects on the border attacked the sabotage detachments of the Croatian army. In the evening, NATO Air Force aircraft attacked the positions of the Serbian rocket forces and air defense. For the artillery barrage, the Croatian army launched a large-scale offensive in all major areas. On the same day, the Croatian President addressed "Croatian citizens of Serbian nationality." The appeal reported that the Croatian army was forced to conduct an operation to return the “occupied territories” to Croatia and restore the “constitutional and legal order” there, since the possibilities of solving the problem through diplomacy were exhausted. Serbian military offered to fold weapon, and civilians to remain in homes and quietly expect the establishment of legitimate authority. At the same time, Zagreb assured the world community that this is not a war, but the restoration of the unity of Croatia.

Strikes croatian aviation and the Air Force did not produce the expected results. On the whole, on the first day of hostilities, Serbian troops at the front line adequately met the enemy, despite its significant numerical advantage. The commander of the Zagreb Corps Basharaz changed the initial plan, according to which the forces subordinate to him should act, and ordered the 2nd Guards Brigade to storm the positions of the Serbs in Petrinje. Although the guards were to surround the city and move on. The assault on the well-fortified positions of the 31st Infantry Brigade of the 39th Bani Corps (BK) of the ICF did not bring success. Serbian artillery destroyed several tanks, Croatian infantry suffered significant losses. The 153rd Infantry Brigade, which attacked the positions of the 24th Brigade, also did not succeed. Another auxiliary attack on Kostainitsa was fought off by fighters of the 26th brigade of the BC.

21-th Kordunsky corps (KK) repelled all attacks of parts of the Karlovac corps. The 11 Infantry Brigade stopped an attempt by Croatian troops to force the Kupa River east of Karlovac. The 13 Infantry Brigade halted the advance of the Domobran regiments southwest of Karlovac. The brigade defended the Koran River. The Serbs also repulsed Croat attempts to encircle the town of Plaški. At the same time part of the Croatian troops ran into minefields.

15-th Lichsky corps was in a more difficult situation. In the area of ​​Gospic, Serbian troops were able to repel the blow of the enemy. The strong attack of the 9 Guards Brigade, with the support of two Domobransky regiments of the Gospic Corps, ran into fierce resistance from the 18 Infantry Brigade under Lubovo. Serbian 9-I motorized brigade beat off the enemy's blow from Medak. The 1-I Guards Brigade of the Gospic Corps was able to breach the Serbian defense at the junction of two brigades of the Lich Corps, at the foot of the Capel Ridge. But the Serbian reserve - the Corps of Special Units, was able to stop the Croatian breakthrough at Lichka-Jasienica. In other directions, Croatian troops were only able to push the Serbs a little, without breaking through their defensive orders.

The Croatian army achieved the greatest success in the Knin area. As expected, the loss of Grakhov by the Bosnian Serbs in July, led to the fact that parts of the 7th Severo-Dalmatian Corps were in a semicircle that could only be closed. Serbian forces in this area had to restrain enemy attacks, conducted simultaneously from the south, west, north-west and east. Only the north direction remained clear of enemy troops. Knin was subjected to massive shelling. About 5 thousand shells were fired around the city. From the side of Grakhov, the 4th and 7th guards brigades struck Knin; by the evening they were able to break through the defenses of the 3rd Operational Group, squeezing its strength towards Knin. In other directions, parts of the Severo-Dalmatian corps repulsed enemy attacks. But in the evening it became known that the battalion of the 9th Guards Brigade and the Croatian Ministry of Internal Affairs special forces in the battle for the Mali Alan pass were able to break through the defenses of the 9th Motorized Brigade of the 15th Lichsky Corps. Croatian troops developed an offensive in the direction of Sveti Roka and Mount елelavac, along the road leading to Gracac. As already noted, the Serbian troops did not have reserve positions and, in the conditions of the enemy’s rapid attack, did not manage to gain a foothold in new frontiers. The 9th motorized brigade began to move east, the Severodalmatinskaya Corps and the capital of the RSK were threatened by the environment. At night, units of the 7th Corps began a retreat to the capital. The defense of the Severodalmatinsk corps began to crumble. Many soldiers abandoned units to save their families.

The Serbs began the evacuation of another 3 August. 4 August evacuation acquired official and total character. The Supreme Soviet of Defense of the Republic, headed by President Milan Martichev, due to the threat of losing most of the territory of Northern Dalmatia and part of Lika, began evacuating the civilian population of the Knin, Benkovac, Obrovac, Drnis and Gracac communities. The withdrawal of the population was planned to be carried out along the route Knin - Otrich - Srb - Lapac. At night, the military-political leadership of RSK moved from Knin to Srb, a city in 35 km from the capital. The last of the capital retreated in the morning of August 5 battalion 75-th motorized brigade. In the morning, Croatian soldiers occupied Gracac and the 7 th Severodalmatmatsky corps, under the threat of complete encirclement, left the Benkovac-Obrovac-Kistanje area. The columns of refugees filled all the roads, but managed to evacuate in a rather organized manner. The Serbs knew that Croatia needed their territory, but without them, so they left almost all the people. Knowing that there would be no mercy, a whole nation fled. It was a real tragedy.

The retreat of 7 of the Severodalmatinsky corps and the military-political leadership of the republic dramatically complicated the situation in other areas. And most importantly - paralyzed the will to resist. On August 5, Islamist troops from Bosnia and Herzegovina came out against the 15 of the Lich Corps, and they struck from the rear. All Serbian troops participated in repelling the Croatian offensive, so the Bosnian border in the Bihac area was covered very weakly. On the night of 5 in August, the 502-I mountain brigade of the army of Bosnia and Herzegovina launched an offensive and occupied Lichko Petrovo Selo without much resistance. By lunchtime Croats and Muslims united at the town of Trzhachki Rashtel, the RSK was cut in two. Southern and northern Serbian connections have lost touch. Another brigade of the 5 corps of the army of Bosnia and Herzegovina made its way to Korenitsy, where was the headquarters of the 15 th Lich corps.

The 9-I Guards Brigade of the Gospic Corps overcame the resistance of the Serbs under Lyubovo. The Serbs had to evacuate all their aircraft from the Krajina Air Force Base in Udbine to Banja Luka. Croats began to make their way to Korenitsy. As a result, the 15-th Lich Corps was divided into three centers of resistance: in Vrhovyna - the 50-I infantry brigade, in Bunich - the 18-I infantry brigade, in the Donji-Lapac area - the 103-I light infantry brigade. The 21 th Corps continued to repel the attacks of the Croatian troops, but the blow of the 505 th brigade of the 5 corps forced the latest reserves into battle.

6-7 August Serbian defense finally collapsed. The servicemen and residents fled to the Republika Srpska. The last pockets of resistance of the 15 Lich Corps were destroyed. Croats captured Otrich. On August 6, the Croatian President arrived in the capital of the RSK and delivered a congratulatory speech. In fact, it was a victory for the Croatian army. On the night of August 6, Serbian troops left Petrin. The Croats also occupied Clay, putting the remnants of the Kordun corps at risk. On August 7, Croatian troops captured the Yard, in the town of Topusko, around 6 thousand Thousands of Serbian soldiers and tens of thousands of refugees were surrounded. In the same period, the 5 Corps eliminated the Allied RAC Western Bosnia. After the defeat of the army of Krajina, most of the soldiers of the Autonomous Region of Western Bosnia fled or went over to the side of the enemy. The Islamists occupied Velika Kladusa with almost no resistance. 8 August Croats destroyed the last pockets of resistance, capturing Srb and Donji Lapac. The commander of 21 of the Kordun corps, Cedomir Bulat, signed a surrender (the former corps commander, General Bosanac went missing near Karlovac). The Serbs surrendered all heavy weapons, and the Croats missed military and civilian refugees, under the guarantees of the UN peacekeepers, into the territory of Yugoslavia. 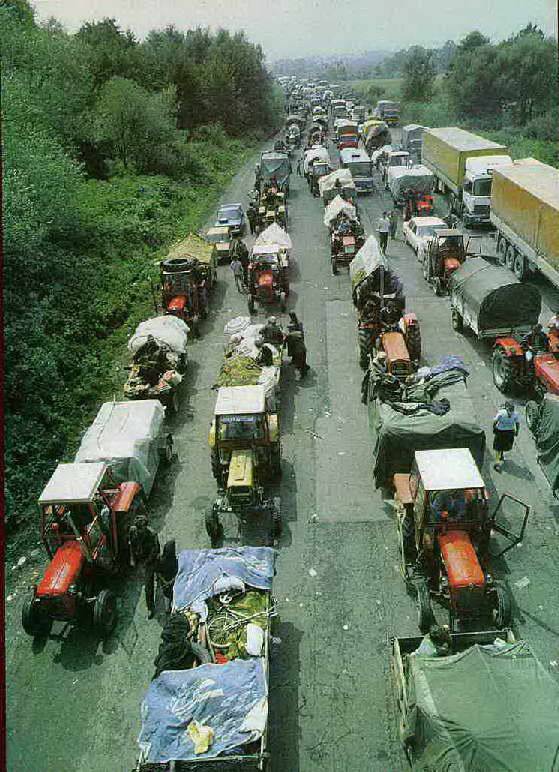 Republika Srpska Krajina were eliminated in a day's 4. The Allied RSK, the Muslim Republic of Western Bosnia, was also destroyed. More than 200 thousand Serbs lost their homeland, fleeing to Yugoslavia and the Republic of Srpska. The Croatian authorities and their patrons from the West fulfilled their task - they cleared Croatia of the Serbs. The Croatian military conducted a real “sweep” - they killed the remaining people, including women, children, the elderly, destroyed entire settlements, religious buildings.

The United States, which advised the Croatian army on the conduct of a military operation on the RSK, helped Zagreb against the “insurgent Serbs” shared the blame for the war crimes of the Croatian authorities. American military advisers trained the Croatian army. NATO divided the butchering information and even inflicted airstrikes on Serb positions. What's more, Washington as part of a rewriting strategy stories and applying the principle of double standards, accused the Serbian side of provoking the Croats. According to the Americans, the Serbs themselves provoked the invasion of the Croatian army. Among the perpetrators of the tragedy of the Serbian people is Germany, which provided military material and diplomatic support to Croatia. It is necessary to note the negative role of the "UN peacekeepers", who not only did not protect the Serbs, but also undermined their fighting spirit with their presence (before their arrival, the Serbs defended themselves). The UN's activity was in words about peace, and not real deeds in defense of civilians.

We should not forget about the actions of the Serbs themselves. The morale of the Serbian military and the population of the region was undermined by indifference to the future of the RSK - its own leadership of the Republic and the leadership of Yugoslavia. Slobodan Milosevic, who constantly looked around to the West and did not intervene, despite the agreement on joint defense with Krajina, is personally to blame.

He who does not want to defend himself is doomed. Tens of thousands of Serbs who could fight for their future with arms, defend their homeland, defend the honor of their ancestors, who lived on this land for generations and left it behind them, fled. As the ancients said, woe to the vanquished! If all the Serbs fought like the Vietnamese, they would have had to be destroyed without exception. And this can not be done in the center of Europe, too much noise.