Who prevented the monuments to the Soviet partisans? 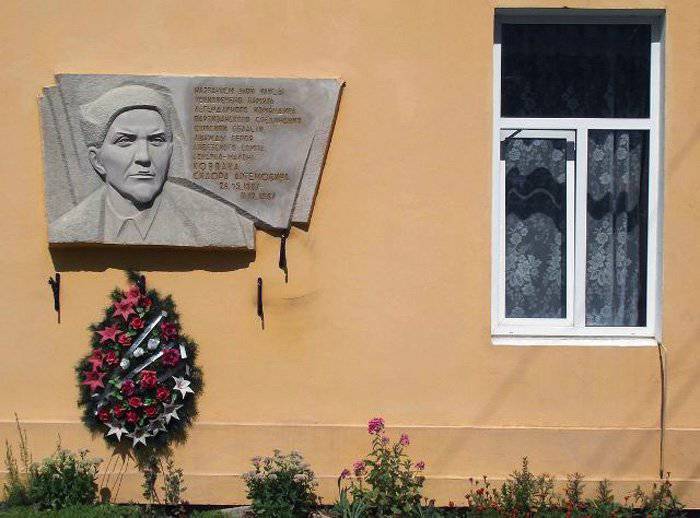 On the territory of Western Ukraine, the campaign to destroy monuments of the Soviet era is in full swing. In particular, we are talking about monuments to Soviet partisans. So, in the small resort town of Yaremcha, Ivano-Frankivsk region, a memorial plaque to Sidor Kovpak was demonstratively eliminated on the main square. The action was initiated by representatives of the All-Ukrainian Union "Trident" named after Stepan Bandera. The activists, tearing the bas-relief from the wall, smashed it with sledgehammers, and the fragments were kicked with their feet. According to the leaders of the union, the destruction of the memorial plaque of the legendary partisan commander was carried out in response to aggression from the enemies of the Ukrainian nation.

Recall that a few days earlier in the same town a communist rally, organized in honor of the seventieth anniversary of the infamous Carpathian raid of the partisan detachment of Kovpak, was attacked. The attackers were the militants of the Freedom party. They attacked the leader of the Communist Party of Ukraine P.Simonenko, throwing him with eggs and stones.

It should be noted that in this situation the police behaved strangely, because no action was taken by its representatives. Similarly, the destruction of a memorial plaque. It seems that nothing will prevent the Ukrainian nationalists from fulfilling their threat of the destruction of all the memorial signs all the way to the Carpathian raid.

The question arises: why the Ukrainian authorities are not taking anything to stop the vandals, in fact, encouraging their frankly illegal actions? T.Chernovol, a former deputy of the Ukrainian parliament, who in the past served as head of the election headquarters of Viktor Yanukovich, expressed his opinion on this issue. He is sure that now, in the light of some events, in particular, V. Putin’s last visit to Kiev and his frank disregard for his Ukrainian counterpart, it is especially important to destroy the memory of the common Soviet past. After all, Yanukovych no longer intends to pretend that he is a great friend of Russia and Putin.

It makes sense to delve a little history, to understand who S.Kovpak is, and what is his role in history. Back in 1942, the military formations of ONU-UPA began to fight against the troops of the Soviet partisans, cutting them into the territory of Polesye and Volyn. At the same time, a real hunt was launched for sabotage reconnaissance groups that were dropped from aircraft.

Bandera gave the fascists information about where the partisan detachments were located, and also gave them the paratroopers and partisans they managed to capture. One of the most significant successes of Bandera can be considered the disruption of the plans of the Soviet command to enter partisan units in 1944 on the territory of Halychyna in order to introduce sabotage actions on enemy communications. At the same time, the so-called Carpathian raid of Kovpak, the commander of the Putivl detachment, who commanded the partisan detachment from Poltava and Sumy, became a real nightmare for the same nationalists. In a short time, a small detachment of brave men turned into a rather serious military unit.

The Carpathian raid was envisaged by the combat operational plan for the Ukrainian partisans for the spring-summer period of 1943, and was approved by I. Stalin, the chairman of the State Committee of Defense of the Soviet Union.

The detachment went to the territory of Right-Bank and Western Ukraine in order to smash the communications of the enemy. The main task of the formation was to make the transfer of fascist troops to the Kursk Bulge, where fierce fighting took place, as difficult as possible. In addition, the partisans' tasks included conducting deep reconnaissance of enemy forces and fortifications throughout the Carpathian theater of operations, since in the fall of 1943, the battle for the Dnieper was launched by Soviet troops. The Soviet command set another task before the Kovpak detachment — to deliver a sizeable blow to the particularly sensitive point of the fascist troops supply — oil products. As it is known, the Carpathian basin in strategic importance as a fuel source held the second position after Romania for the Reich.

The raid began on 12 June 1943 of the year. Then in the composition of the detachment Kovpak, there were about 1930 people. In addition to war-hardened warriors, there was also a significant amount of weapons - about 150 machine guns, dozens of mortars and guns. The fighters acted in a raid from the village of Milosevichi in the Zhytomyr region, which is not far from the Ukrainian-Belarusian border. For a hundred days, the partisans had covered more than four thousand kilometers. Later, historians will call the Carpathian raid the most successful raid ever conducted by the Ukrainian partisans.

The general direction of the movement is the Zbruch River - the Carpathians, that is, those territories that were especially saturated with police units of the Turkmen and Uzbeks, Ukrainian nationalists. The most brutal resistance was provided by Tatar volunteers. However, this did not prevent the Soviet partisans from winning victories one by one.

The Kovpak detachment also conducted sabotage activities, in particular, in early July several road and railway bridges near Ternopil were blown up by its partisans, and tens of convoys passed through them within 24 hours. Such successful actions were the reason that all movement in these areas was stopped, the trains had to be returned back to Krakow and Lviv, to overtake the trains through Moldova and Romania. The transfer of fascist armored formations in the midst of the Battle of Kursk was disrupted.

This enraged Hitler, who ordered Himmler to destroy the Kovpak compound, which by that time numbered about 20 thousands of people. Hitler ordered Griger, the general of the SS troops, who had combat experience in the Carpathians during the First World War, to command the operation to eliminate the Kovpak detachment.

The Kovpak compound moved along the Dniester River, destroying more than 200 SS policemen and 37 vehicles on its way. The whole German administration escaped. At the same time, a leaflet appeared in which the Germans openly asked for help from the civilian population in the destruction of the Kovpak gang. 15 July 1943, partisan units were blocked by SS units in the forest, but they managed to escape and join the Carpathians.

A few days later, the partisans in the Black Forest from both sides immediately attacked the police regiment of the fascists, seizing the guns and firing at the Germans themselves. Then the Nazis lost 66 machines and three hundred soldiers. Attacking the enemy’s military formations, the partisans did not forget about the destruction of oil wells, oil derricks, factories and oil storages.

Against the partisan formation several police regiments with artillery and tanks, mountain police regiment, transferred to the Carpathians from Norway and mountain regiment of "edelweiss". In addition, Caucasian volunteers, Hungarian mountain regiments and the Belgian battalion took part in the operation to destroy partisans. In total, about 50 thousand people opposed Kovpak and his detachment.

Most of all, Kovpak was plagued by German Messerschmitt-110 raids, two of which the guerrillas managed to shoot down. At the same time, the weather conditions worsened: rains and thunderstorms began, the horses could not withstand the stress. The partisans had to blow up part of mortars and guns in the mountains. In addition, the detachment had to starve, because the Germans were stealing cattle. There was no way to deliver food from the mainland, since the front line was very far from the Carpathians, and the planes simply didn’t fly there.

Two dozen times the partisan detachment managed to escape from the traps of Krieger. But the difficult situation in which the division found itself forced the command to decide on the need to break through to the plain in the direction of the station Delyatin, where there were several railway and highway bridges, having blown up which could temporarily break away from the enemy. In addition, it was in Delyatyn Kriger headquarters.

4 August three shock guerrilla columns moved on the enemy. Then the German headquarters was completely destroyed, the bridges were destroyed and only Krieger managed to stay alive. The reserve forces of the enemy moved to the partisans because of the Prut River. The departure of Kovpak's detachment was covered by a small compound of Commissioner Rudnev, which included a 48 man. The guerrillas managed to leave the station, but that battle was the last for the commissioner.

The detachment was divided into several groups that independently selected from the mountains. The most amazing thing was that most of the seriously wounded soldiers were able to be saved. The return of the partisans to the former place of deployment continued throughout the fall of 1943. One of the most important results of the Carpathian raid was information about the combat capabilities of the Bandera underground in Western Ukraine.

A year later, it was here that fierce fighting between the troops of the NKVD and the UPA took place. For a successful fight against the rebels, the need arose for knowledgeable people. Therefore, the detachment of Kovpak was transformed into a cavalry brigade of the NKVD, which took part in the battles. And then the former partisans got a chance to fully revenge the enemy. According to many veterans, it was thanks to such units that the mass Bandera movement in Galicia was destroyed.

But back to our time. It should be noted that this is far from the first case when monuments of the Soviet era are being demolished in the Western Ukraine region. So, back in 2007, the city councils of Lviv and Ternopil adopted a resolution on the dismantling of all Soviet monuments. In Chernivtsi, the monument was destroyed “hawks” - volunteer units that opposed the troops of the UPA.

The leader of Svoboda, Oleg Tyagnibok, who called the SS division “Galicia” the greatest spiritual value of Ukrainians and repeatedly called for the destruction of monuments of the Soviet era, in particular, to demolish the monument to the soldier-liberator in the town of Striy in the Lviv region, because he According to politics, distorts the historical truth. The local authorities did not venture to such a scandalous step, so the monument was doused with paint, not forgetting the inscription about the “cursed Moskals”. There is nothing to be surprised about, because even earlier. In 1992, a monument to Nikolai Kuznetsov, Hero of the USSR, reconnaissance and partisan was dismantled in Lviv. Acts of vandalism regularly take place on the Hill of Glory in Lviv, a memorial to Soviet soldiers-liberators was poured with paint in Drohobych, swastikas were painted.

But, as they say, for which they fought, they ran into it. While Ukrainian nationalists are engaged in the destruction of Soviet monuments, unknown “avengers” are destroying monuments and plaques to leaders of the UPA. So, in particular, on the eve of Victory Day, the monuments of S. Bandera and R. Shukhevych in Ivano-Frankivsk, Rivne and Lviv regions were damaged. Also, the monument to Bandera, which is located on the territory of the museum-estate in the Stryisky district, the memorial plaque to Bandera on the building of the polyclinic in Zdolbunov, and the memorial plaque to Shukhevych in Lviv, was damaged.

To whom all these monuments interfere - it is not clear, because they are part of history. The older generation experienced both those times and those heroes. And the leaders of the nationalists, and the Soviet leaders, and the partisans - all this was, and just forget about them, destroying the monuments - will not succeed. And is it really worth fighting with monuments? Maybe it is better to think about how to make the stories of the two opposing sides peacefully coexist?