Russia's Supreme Court: There is no reason to initiate a case of treason against Gorbachev 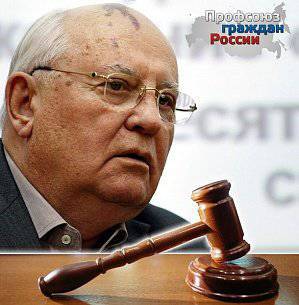 According to the historian Starikov, “the people have long since brought the name of Gorbachev MS to the list of traitors. ”

The historian Nikolai Starikov writes in his blog:

In January, 2012, the Trade Union of Russian Citizens, on behalf of millions of people in the post-Soviet space, appealed to the judicial authorities of the Russian Federation with a request to consider giving a legal assessment of the activities of the former USSR President Gorbachev, MS

We wanted and want a person who destroyed a great power, violating the oath of the president of the USSR, whoever brought suffering to tens of millions of Union citizens, was called not “an outstanding figure”, but was called legal language in quite different words.

We passed the district and city courts, in which we received the formal replies. They also appealed to the Supreme Court of the Russian Federation, which gave a lengthy conclusion that Daria Dedova, a member of the PGR, did not say anything new about Gorbachev’s unlawful acts in his statement. Such a formulation indirectly proves that the judges do not deny that the listed facts in the application of Dedova DA there were places to be. And while the servants of Themis see no reason to review and resume criminal prosecution of Gorbachev!

The lawyer of the PHR, Mikhail Gerasimov, prepared a supervisory appeal addressed to the chairman of the Supreme Court of the Russian Federation, Vyacheslav Mikhailovich Lebedev. The complaint once again stated the reasons why the PGR requires a legal assessment of the activities of MS Gorbachev. as president.

According to Starikov, “the people have long since brought the name of Gorbachev MS to the list of traitors. ”

“But we don’t crave blood,” noted the historian. - We, now living in Russia and not wanting to leave anywhere, need to know the truth about who and what caused the collapse of such a powerful Power as the Union of Soviet Socialist Republics. Millions of people living in the post-Soviet space are waiting for a fair legal assessment of the criminal acts of MS Gorbachev.

Earlier, NewsBalt reported that last spring the public appealed to Russian President Vladimir Putin with a request to deprive the first and last USSR President Mikhail Gorbachev of the Order of the Holy Apostle Andrew the First-Called. Among those who signed the appeal are political scientists Modest Kolerov and Tatyana Poloskova, director of the Institute of Globalization and Social Movements Boris Kagarlitsky, member of the Public Chamber of Russia Georgy Fedorov and many others. As a result, an online petition to the authorities of the Russian Federation with a request to deprive Gorbachev of the highest award of Russia was signed by about 8 thousand people.

Ctrl Enter
Noticed oshЫbku Highlight text and press. Ctrl + Enter
We are
Photo from Syria by Mikhail Leontiev
171 comment
Information
Dear reader, to leave comments on the publication, you must to register.