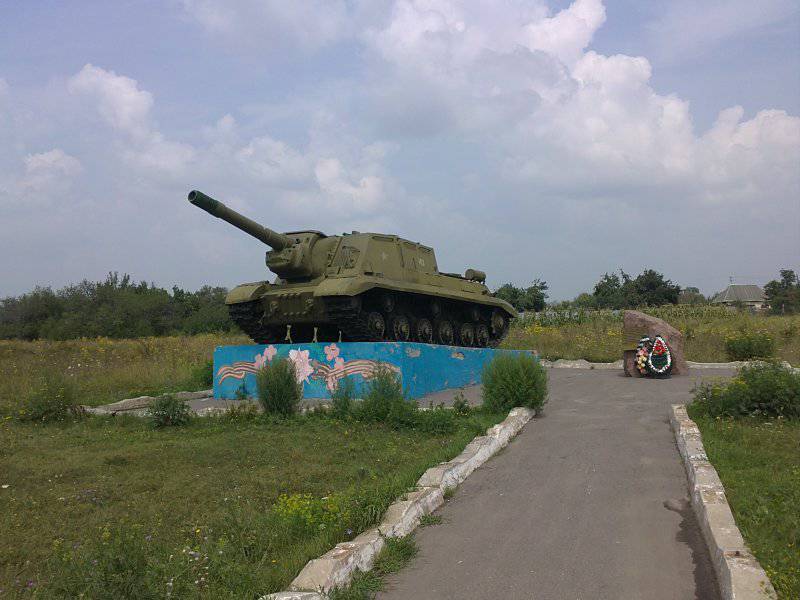 Pukhovo village, Liskinsky district, Voronezh region. An unremarkable road makes a sharp turn, and the following picture opens up: to the left of the road is a high railway embankment, to the right, a kilometer - a village. And next to the road is ISU-152.

At the outskirts of this small village, which is kilometers in 30 from the Liski junction station, two roads crossed - the railway and the highway. In January, 43 on the field maps, our and German, they were marked as objects of strategic importance. Trying to strangle the railway junction of Liski, the Germans and Magyars used equipment and army reserves on those roads to the Don. The Voronezh Front, preparing the Ostrogozhsk-Rossoshansky offensive, planned to stop the fascists from retreating along these roads to Rossosh and Kantemirovka, Belgorod and Kharkov.

A separate guard tank regiment of Lt. Col. Caravan’s breakthrough, advancing as part of the 18th separate rifle corps, was ordered the day before: to crush the enemy’s defense line in the Shchuchye area, to break it inland and pave the way for the infantry, to drag it along along the tank track. The ram of the enemy’s defense was to become tank company of the communist Peter Kozlov. She was to make a swift raid to the Pukhovo junction and, riding a highway and railroad, cut off the Nazis' escape routes.

On the morning of January 14, the heavy KVs, covered with artillery and Katyushi volleys, rushed down the virgin snow towards Petrovskoye village, dragging the infantry behind him. On the field near Petrovsky, a powerful explosion almost threw the commander’s car on its side — a tank ran into a minefield. While the company crushed the defenses on the approaches to the village, Kozlov’s crew replaced the broken trucks and re-entered the battle. Behind Petrovsky outskirts Kozlov's tanks rushed westward with a landing force on armor. A short battle at Kolomyshevo overturned the resistance of the Magyars and forced them to flee, throwing weapon and technique. The infantry was to finish their rout, tanks were torn to the main goal - Pukhov's traveling.

Here are the extreme huts Pukhovo. Nearby is a railway embankment crossed by a highway. On the outskirts are the trenches of the Magyars. Tanks on the move break into them. On the right, from an ambush at the gardens, four assault guns of the nazis hit the KV. On the left, the anti-tank battery also opened fire. But Kozlov's tanks continue to raid. Still, even in 1943, “KV” was a tough nut to the Germans.

The assault gun was blown up by an explosion of a tank shell - it was hit by a commander’s crew. The second tank is ironing trench lines. Deploying a heavy "KV", Kozlov rammed the second assault gun. A terrible explosion in the stern of the tank - this anti-tank gun Magyar almost point-blank shot the Soviet tank from the left flank. Having come to his senses, Kozlov, through the optics of the sight, sees how the second “KV” is blazing nearby. Tankmen fall out of the hatches of a burning car into the snow. Having accepted the crew of a burning tank, the seriously wounded commander continues the battle. Many times the Nazis rushed to the attack, trying to take the tank crew alive. Machine guns mowed them on the approaches to the tank, leaving enemy corpses around the mountain. In the twilight glow from the flaming nearby "KV" it was clear how the anti-tank guns were deployed to direct fire. Still, the turret cannon of the wrecked tank was ahead of them. About two hours this unequal battle lasted ...

Two tankers died in it, the remaining 8 were injured, four of them, like the commander, were hard. The Siberian infantrymen who arrived in time, lifted the siege of the tank and freed Puhovo. The wounded tankers, together with their commander, were sent to the hospital, where Kozlov died from his wounds ...

On April 19, the commander of the Voronezh Front, Colonel-General Golikov, and a member of the Military Council of the Front, Lieutenant-General Khrushchev, will approve the presentation for awarding the brave tanker. From Kozlov's award list, PA: “... his guards feat will serve as an example for the regimental personnel. Crew Guards. Art. Lieutenant Kozlov destroyed: bunkers and dugouts - 3, PTO guns - 8, assault guns - 2, machine guns - 2 and up to 180 enemy soldiers and officers. Worthy of the title of Hero of the Soviet Union. " And 28.04.43, for the feat near the village of Pukhovo, by decree of the Presidium of the Supreme Soviet of the USSR, senior lieutenant Kozlov Peter Alekseevich was awarded the title Hero of the Soviet Union. Posthumously.

Departure Pukhovo. With the trunk to the west, a hundred meters from the “piece of iron”, beaten off by the tank crews in the enemy's 43, froze “St. John's wort”. It is a pity, of course, that not "KV". It is a pity that the monument is gradually dilapidated. Human memory is generally short, unfortunately. And the desire to take care of their memory, apparently, is also short-lived. 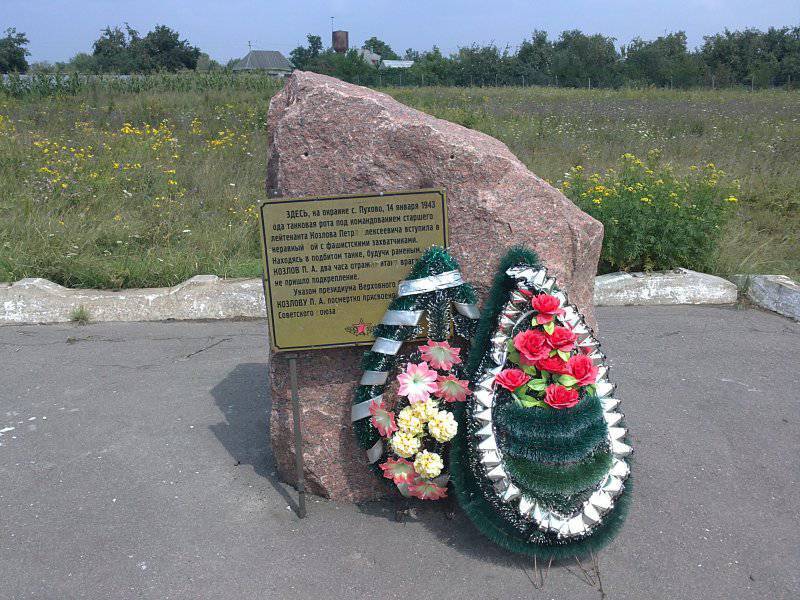 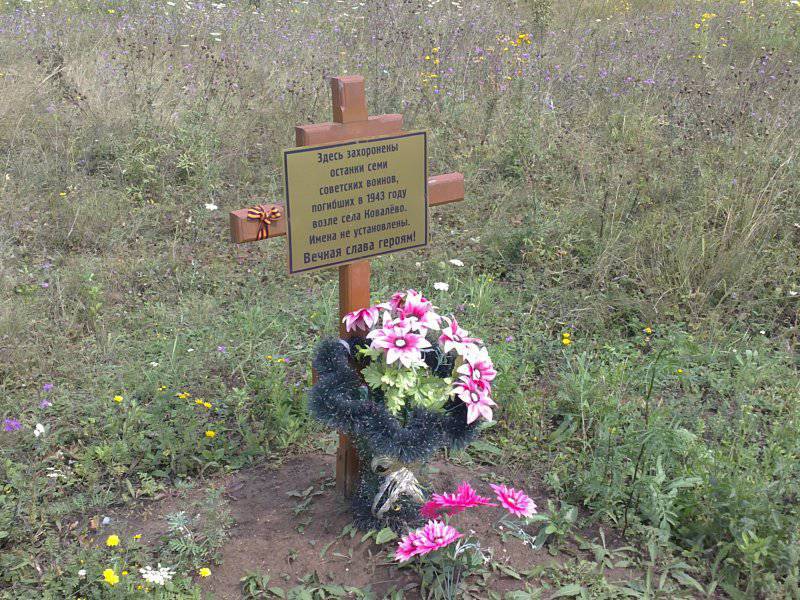 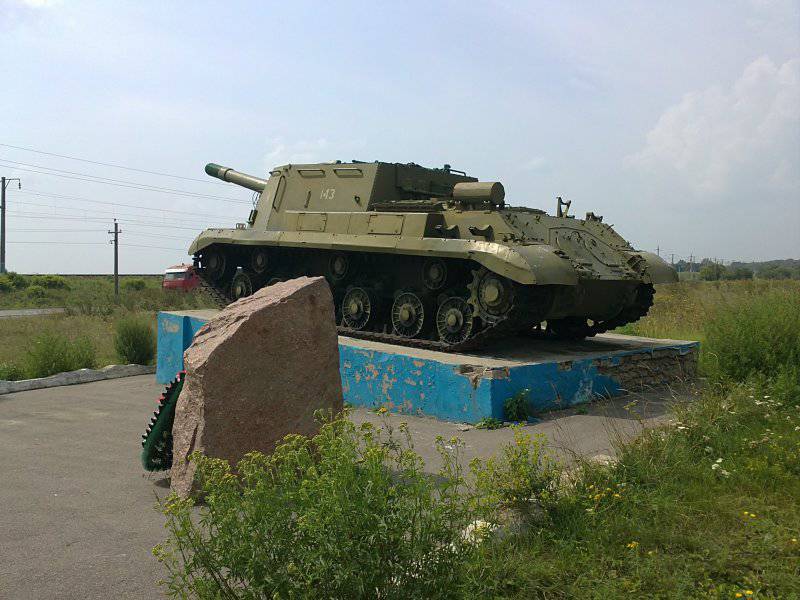