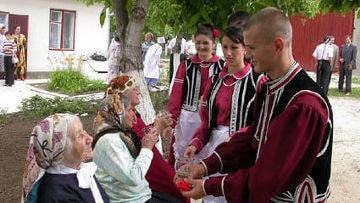 In our textbooks stories for the upper classes, it was usually noted that the Turkic peoples managed to preserve their national identity thanks to Islam, and non-Muslim Turks, dissolving in other communities, disappear. As an example, the phenomenon of the Slavonicization of the Bulgarians of the Turkic ethno-linguistic family was cited. However, when looking at history and modernity, it can be stated that religion itself does not prevail in the process of preserving national culture. For example, along with the Turks who underwent arabization surrounded by Arabs in Syria, there are such communities of Turkic origin that have not lost their culture, despite the adoption of Orthodoxy. These are Chuvash in Russia or Gagauz in Moldova.


There are different ideas about how the Gagauz who converted to Orthodox Christianity found themselves in the region. Some believe that the Oghuzs, who together with the Huns or some time after they came to the region, having rounded the Caspian and Black Seas from the north, were the ancestors of the Gagauz. Therefore, the ethnonym "Gagauz" is considered modified from "Gek-Oguz" [Türk. - heavenly Turks].

Others associate the ethnonym's origin with the name of the Seljuk ruler Izeddin Keykavus II. In this regard, it is argued that when the Mongols, making raids on Asia Minor, destroyed the state of the Seljuks, Sultan Izzeddin Keykavus II, together with a large group of Turkmen, fled to Byzantium. After the death of the Sultan, the Turkmen settled in the Dobrudzhi area (modern Romania) and adopted Christianity under the influence of Byzantium. Today, there are disputes about the authenticity of these ideas, but one thing is quite certain: the Gagauz are an Oguz tribe. Their language is very close to Turkish.

Today, the Gagauz people live on the territory of Moldova, where they found themselves after the capture of the Ottoman lands by the Russian army. When the territories of present-day Moldova were ceded to Russia after the victory over the Ottoman Empire, a large number of Bulgarian and Gagauz peasants from Bulgaria, to which the Russians flew in fleetingly, were resettled in the newly conquered territories. The ethnic roots of Enver Pasha (one of the most controversial figures in our recent history) also go back to the Gagauz.

At present, discussions about independence are gaining momentum in this Orthodox Turkic community. Gagauz owns an autonomous territory within the borders of Moldova, while the majority of the Gagauz are inclined to believe that the Moldovan authorities seek to limit their autonomous rights. The statements and position of the Moldovan authorities on this issue only reinforce the separatist tendencies.

As we noted earlier, Moldovans are a people akin to the Romanians, so the Moldovan authorities are in the long run inclined towards unification with Romania. The Gagauz, on the other hand, feel a much stronger affinity for the Russian people, and in this regard, Romanian nationalism causes a negative reaction in them. After the collapse of the USSR at the beginning of the 1990s, along with the activation of the Romanian nationalist elite in Moldova, the Gagauz, as well as the population of Russian and Ukrainian origin, who lived in Transnistria in the east of the country, declared their protest in favor of separating the two regions from Moldova. In the middle of the 90-s, including thanks to the initiatives of Turkey, the Gagauz agreed to autonomy, and an autonomous territorial entity, Gagauz land, emerged in Moldova. At the same time, the territories adjacent to the Dniester River (Slavs live there) are still not controlled by Moldova.

In the Gagauz community, pro-Russian tendencies have always been strong (until recently, one of the regions where the Communist Party of the Republic of Moldova oriented towards rapprochement received the most support of voters was Gagauzia). Therefore, some experts see Russia's influence in strengthening the Gagauz separatist movement. On the one hand, the Moldovan authorities uphold the pro-Western line. Russia, on the other hand, seeks in various ways to maintain its influence in Moldova and not allow this small, but strategically important country to come closer to the EU. The strength of this influence is vividly demonstrated by the various regional economic agreements that Russia concludes with the Gagauz land, as well as the statements of the Gagauz leaders that Gagauzia has the right to join the Customs Union of Russia, Belarus and Kazakhstan, regardless of the decision of Moldova.

Adherents of the idea of ​​holding a referendum on independence in the Gagauz land collected more than 6 thousands of signatures (almost every thirtieth of the Gagauz living in Moldova), and this issue is discussed everywhere, primarily in the autonomous education parliament. The most intense struggle around this state, which remains on the outskirts of Europe, is led by the EU and Russia. Whether the strengthening of this struggle will lead to the creation of an Orthodox-Turkic state, time will tell.