Our история consists of a set of events that add up to a historical mosaic. This mosaic is our heritage, our honor, our future.

I sincerely regret that from this mosaic gradually, over time, separate pieces are lost. The rhythm of today's life is such that it is not surprising if all that remains after 10-20 years are two dates: 22.06.1941 and 9.05.1945. And a few last names. It's a shame to state, but the past is gradually forgotten. 7 May this year, I conducted a tour of the places of the military past of the city of Voronezh and faced with an interesting phenomenon. Of the 52 participants, none knew about this place. Meanwhile, the age of participants ranged from 14 to 60 years.

And I decided, to the best of my ability, to at least slightly correct the existing state of affairs. And to tell about the events of seventy years ago, actually forgotten in our time. Just because I consider myself the debtor of those who remained in those places.

On this site was posted a magnificent article by Andrey Lebedev on the events of the Battle of Voronezh (http://topwar.ru/17711-maloizvestnye-stranicy-iz-istorii-voyny-bitva-za-voronezh.html). But even it does not say anything about the place I chose for my first story.

Chizhovsky bridgehead in the center, Shilovsky - near the city outskirts. It goes without saying that it is easier to get to Chizhovsky, here and on a holiday, and on weekdays the excursion lasts; the bridgehead is not deprived of attention, described, profotografirovan. But for some reason I was drawn to a distant, outlying, where the tour buses almost never come.

The chronology of those events is extremely simple.

Opponent 57 th and 168 th infantry divisions, 3 th and 29 th motorized divisions, breaking through the defense of the Red Army units in the Kastornoye area to 3 July 1942 and opposing parts of the 40 th army, advanced units approached the western coast of the river . Don. Intending to enter Voronezh from the south, the enemy of 4 July 1942 was partially leaked to the east bank of the r. Don on the site Petino - Malyshevo and started fighting for the Shilovsky bridgehead.

The fighting immediately took on a fierce character, since not one of the opposing sides wanted to lose a foothold advantageous in all respects. The shortest road from the Don ferry at Malyshev to the southern outskirts of the right bank of Voronezh passed through the bridgehead. The Shilovsky forest provided good opportunities for imperceptible concentration of reserves, masking warehouses, and placing logistic services and subdivisions. And Shilovo, located on a high mountain, ensured a dominant position over the left bank. Even without binoculars, the Soviet defensive positions near Maslovka, Tavrovo and Berezovka were clearly visible from the village, especially from the church bell tower. Freely viewed dirt roads and railway tracks.

By this time, only units of Lieutenant Colonel I.I.'s 232 Infantry Division could oppose the enemy in this direction. Ulitin and the 3 th division of the air defense of Colonel N.S. Sitnikov, since the rest of the Red Army were on their way to Voronezh.

For four days, the battle on the Ostrogozhskoye road and the adjacent plain, in the Shilovsky forest, in Trushkino and in Shilovo, was boiling without stopping. Only a large numerical and technical superiority on the ground and in the air allowed the enemy to break through to the southern outskirts of the right bank of Voronezh.

July 7 skirmish in Shilovo stopped. Of the defenders of the village, who had fought with the enemy to the last opportunity, no survivors remained. Once in Shilovo, the enemy immediately rushed to the river Voronezh, where he forced it on the site of the old ferry. A battalion of German machine gunners moved to Maslovka. But during the counterattack of the Soviet units of the 41 regiment of the NKVD and the 737 rifle regiment, the 206 rifle division, the fascists were almost completely exterminated.

11 July 206-I SD, performing the task of mastering Shilovo, Trushkino on the west bank of the river. Voronezh, began forcing the river 748 and 737 rifle regiments. The enemy put up stubborn resistance and with heavy fire from machine guns, machine guns and mortars stopped the offensive.

Despite unsuccessful actions, the division nevertheless achieved its goal. The enemy was forced to build up a group in this area, somewhat weakening the onslaught in Voronezh. Intelligence revealed the presence of a motorized infantry regiment in the Shilovo area; came to Malyshevo Tanksthe number of which has not been established.

On July 17, the first voyage on pontoon and other transport means went to the west bank of the r. Voronezh. However, as before, the ferry was disrupted by organized enemy fire. In addition, the enemy had destroyed 6 boats A-3. Re-boost the success also had. During the night the division demonstrated false crossings in the Tavrovo and north regions. The loss of the division for July 17 was killed and wounded: the average personnel - 24 people., Junior personnel - 42 people. and ordinary composition - 422 people.

Until the end of the month, parts of the division were still able to transport the main forces, but their advance was insignificant.

In the seizure and retention of the bridgehead, our units suffered significant losses. For example, an 100 man was killed and wounded in the regiments of the 791 Division. Given the evolving situation, the commander of the 40 Army, Lieutenant-General M.M. Popov on the night of August 2 took 100-th SD with a bridgehead. Her section was transferred to the units of the 206 Infantry Division.

In August, the situation of the Soviet units changed a bit. The center of the main struggle moved to the region of Stalingrad and the Germans near Voronezh switched to tough defense. By this time our aviation began to gradually gain dominance in the air.

ON. Chaikin recalled one of the 737 offensive offensive operations of the 206-th SD division in August of 1942 in August: “August 10 of 1942. This morning, the entire battalion was raised to the attack. Before the signal was given by rockets to rise in the attack of the battalion’s companies, powerful Katyush volleys were given at the enemy. Mines fired by our "Katyushas" whistled like a fiery whirlwind over our heads, and then rumbled, shook with gaps over the trenches of the fascists. From the direction of Maslovka, our attack aircraft came at a low altitude; they bombed and projected enemy positions. On the side of Maslovsky Forest, our artillery struck the positions of the fascists. Ahead of our advancing chains was raging hurricane fire breaks. A series of red missiles toward the enemy raised our units to attack. And again, as it was already many times, the enemies came to their senses, used their deeply echeloned defense, and heavy attack mortars, artillery, and then a firing automatic machine-gun fired on our attacking chains from behind the settlements of Shilovo, Trushkino. All this mowed our advanced offensive chains of fighters. Our attack once again choked, we withdrew huge losses to our previous positions, taking the wounded with us. ”

By the end of August, the Soviet troops, just as in July, could not break through the German defenses and occupy the Shilovsky bridgehead completely.

206 sd fought here until mid-September, and then transferred its positions to the 141 rifle division. The losses of the division from July to September were huge. In particular, the 3 th rifle battalion of the 737 jv 206 st., Which at the beginning of July numbered around 700 people. and received during the fighting 300 people. replenishment, at the time of the transfer of positions to other parts counted only 47 people.

Thus, the active operations of the Soviet units in the Shilov region bound the large forces of the enemy and diverted his attention from the Chizhovsky bridgehead, where favorable conditions were created for the offensive of the 40 Army. In addition, he lost an important tactical line and could no longer use the Don ferry near Malyshev and the Bolshak leading to Voronezh with impunity. The Shilovsky bridgehead is one of the most important memorial sites of the battle for Voronezh. Persistent battles for the villages of Shilovo and Trushkino, for the forest are associated with heavy losses of our parts. There are about a hundred thousand of our soldiers and officers left.

It was a meat grinder, where our and German parts were ground. These hills remember the waves of attacking Soviet soldiers, and the choking barking of German machine guns. Who will appreciate the height of these hills? Who knows how to go to meet machine guns, beating from the tops of these hills? Every day they are becoming less and less.

A monument installed in the memorial complex "Shilovsky bridgehead" is unique. He is the only one in Europe. Its uniqueness lies in the fact that it was manually chased from aviation duralumin by the workers of the Voronezh aircraft plant. The one who let the Elahs iron these hills. And the memorial is maintained in proper condition by the staff of an unfinished nuclear power plant. In the spring of this year, the station’s security detained four young plants from 14 to 18 years, whose goal was to tear off and sell the duralumin ... Times and customs leave much to be desired, despite calls for a revival of patriotism.

And the last. A small photo tour of the Shilovsky bridgehead.

All that remains to us from the 1942 fights of the year is a small mass grave near the memorial. 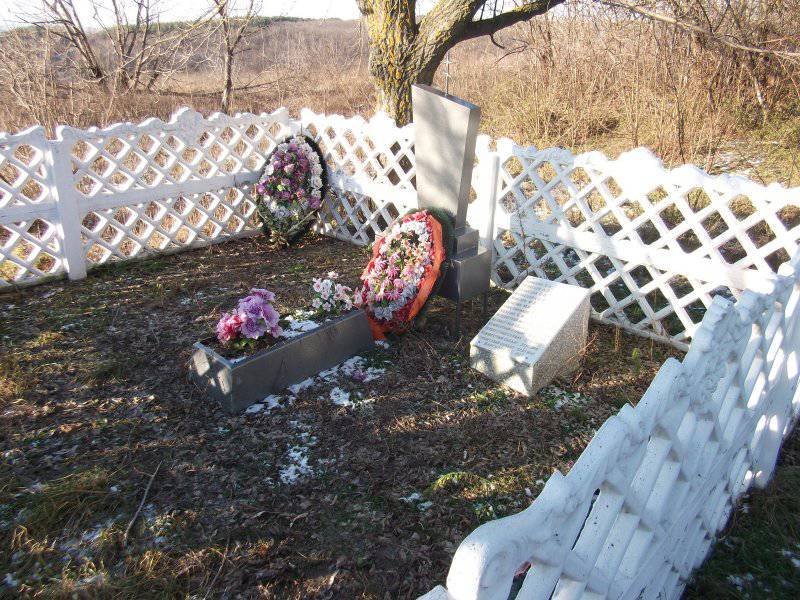 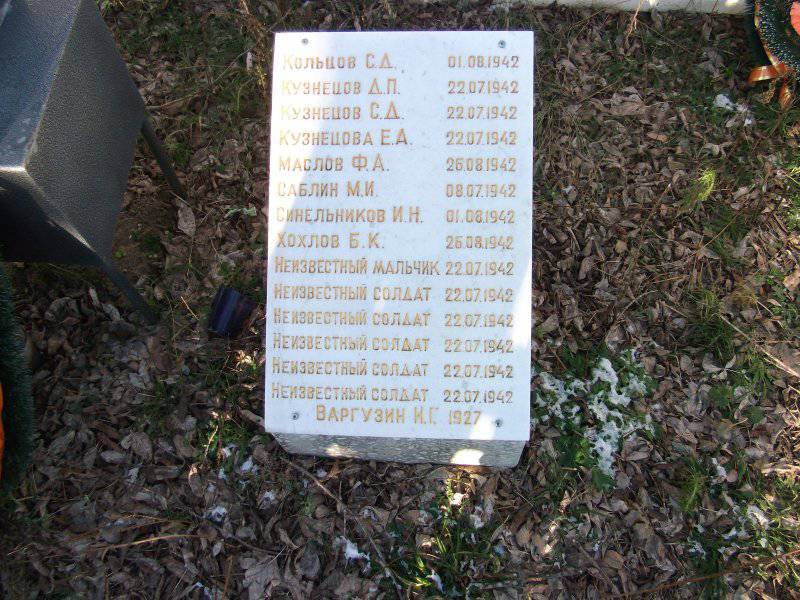 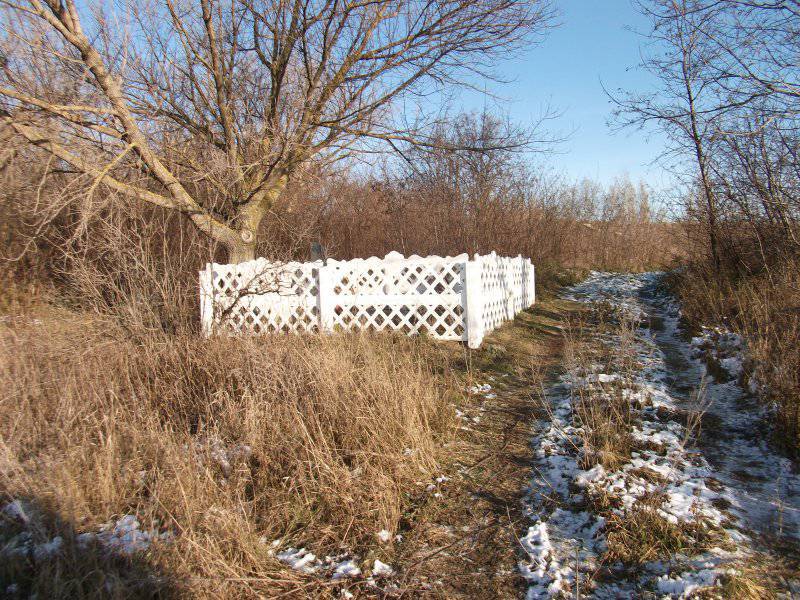 The bell tower of the Assumption Cathedral keeps on itself the traces of Soviet bullets and shrapnel, with which our soldiers tried to destroy the German artillery spotters. 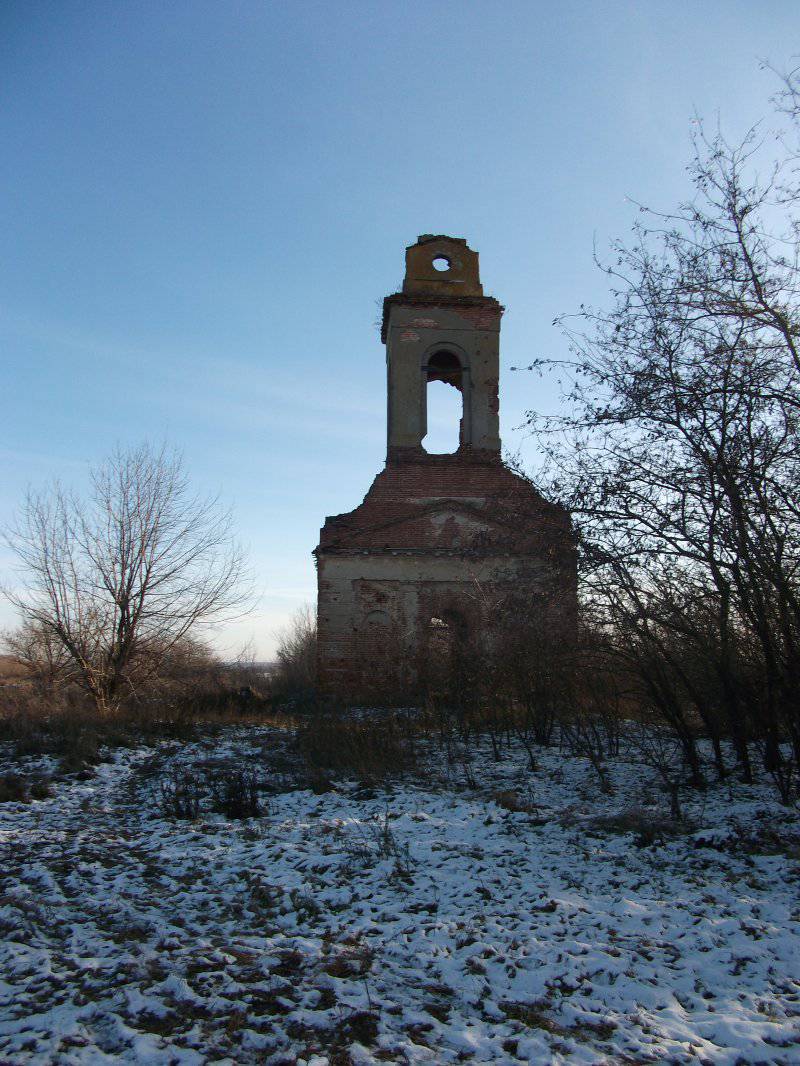 Memorial and monument to Soviet fighters. 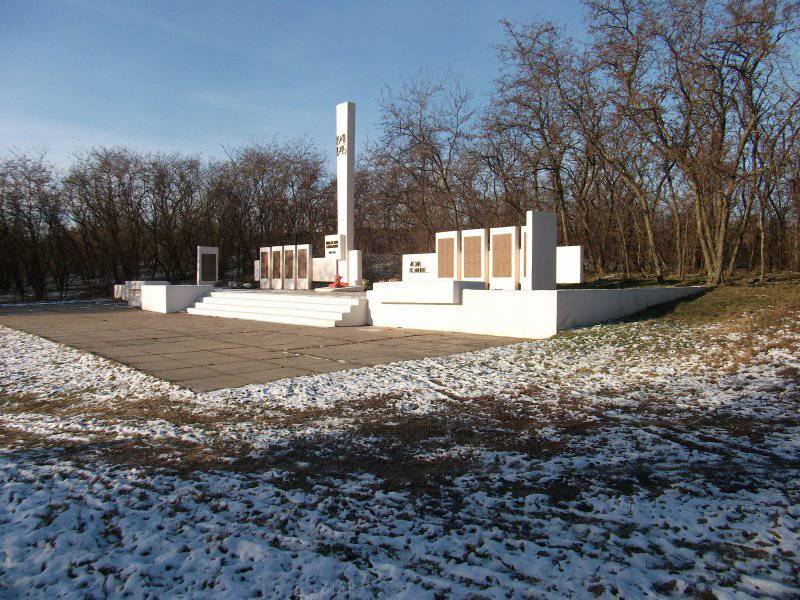 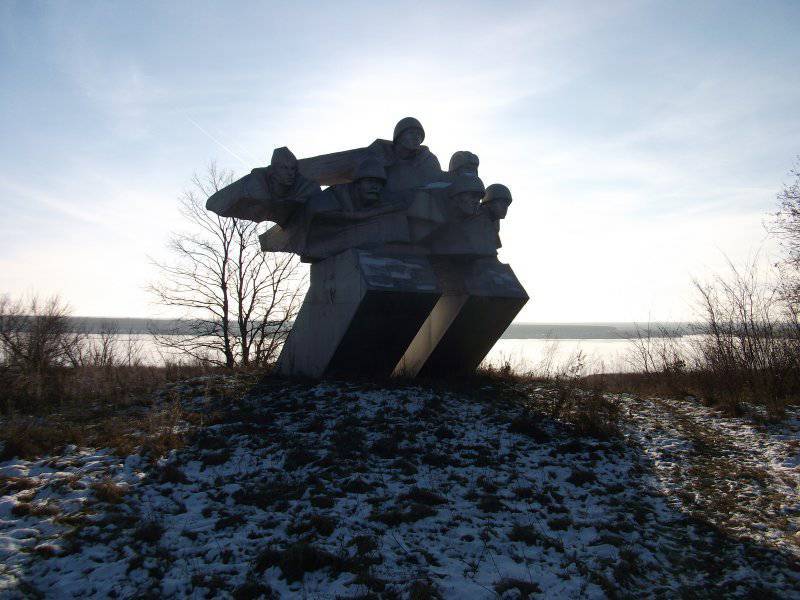 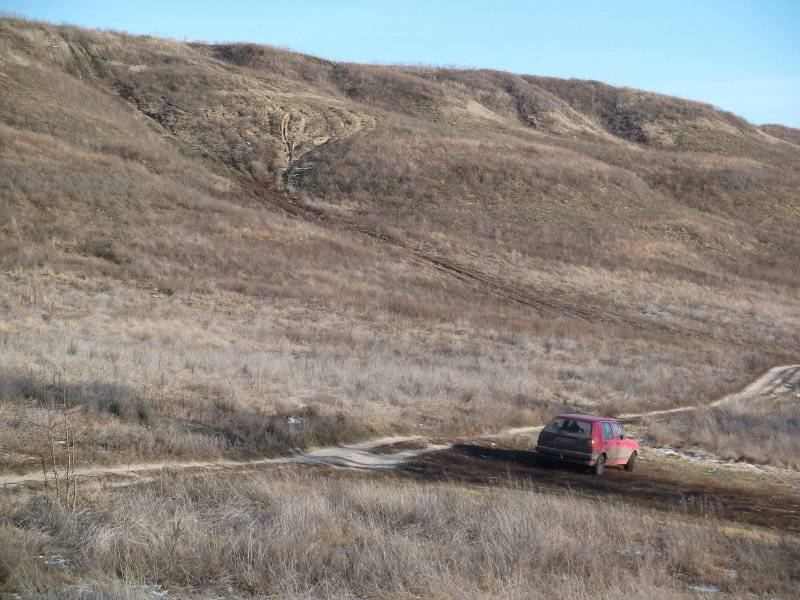