India can not be lost

August 19 2013
36
After the explosion on an Indian submarine made in Russia (“Sindurakshak”), as a result of which the crew of the warship was killed, and the boat itself was not subject to recovery, frankly, something sank. Well, what is this: if a major accident occurs on a particular object of space or military equipment, then surely the strings lead to Russia ... Or it exploded (fell, did not take off, did not shoot) with ourselves, or with someone, again, the exploded (untrained, unaccounted) of our own production. As they say, it's a shame ... 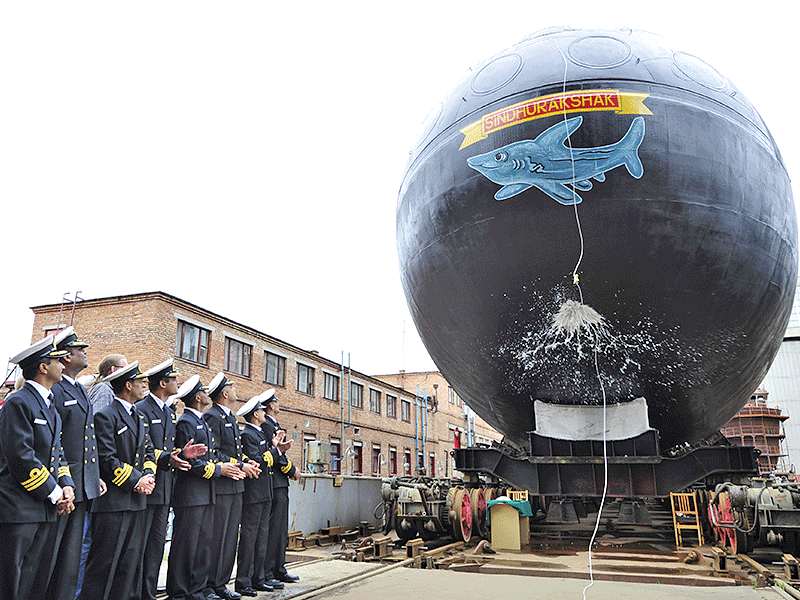 The causes of the accident at Sindurakshak have not yet been officially named. There are versions that the accident occurred solely due to the fault of the Indian crew, who did not see anything when charging the batteries of the submarine. However, for now this is exclusively the Russian version. The Indian side still refuses to give comments, and also does not allow the Russian specialists who were directly involved in the construction of the boat to investigate the causes of the accident on the submarine.

And even if we assume that the Russian manufacturers to the state of emergency on the boat, including indirectly, do not have any relation at all, the alarm remains. And the main "worm" of this alarm is related to the fact that our bilateral relations with India, as the main buyer of Russian arms, from Delhi partners can purely hypothetically reconsider, turning their attention to other manufacturers of military equipment. So far, thank God, this is not about this, but as they say, everything flows, everything changes, and therefore you need to hope for the best, but also the worst to keep in mind, especially since India and in addition to "Sindurakshaka" recently Our country (as the main supplier of military equipment) had questions.

I don’t want to once again talk about the fact that Russian military and space manufacturing enterprises are experiencing a significant shortage of qualified personnel, I don’t want to again think about the need to change the approach to the pricing of military equipment, the salaries of employees of military production enterprises, to management. All this has already been discussed, and more than once.

But it is worth talking about the volumes of cooperation that exist in the relations of the military-technical nature between Russia and India today, and what impact a reduction in these volumes can bring not so much on the Russian economy as on the prestige of our country as a manufacturer of modern and effective weapons . Moreover, the understanding of the inadmissibility of missing the Indian client extends, thank God, and to our authorities:

But whatever the results (in terms of investigating the causes of the accident at Sindurakshark - author's note), India is our leading partner in matters not only of the sale and purchase of finished military equipment, it is our leading partner in the prospect of jointly creating military special equipment . We will help India build capacity in this endeavor.
, - Deputy Prime Minister Dmitry Rogozin, who closely follows the investigation of the accident on the Sindurakshak submarine, as well as the implementation of the Russian-Indian military-technical contracts in general, made a statement.

The current trade turnover (following the results of 2012 of the year) between Russia and India, of course, cannot be called impressive for such impressive economies. The total trade turnover between our countries is no more than 11 billion dollars (for comparison, the trade turnover between Russia and China was almost 90 billion dollars for 2012 a year), and, for obvious reasons, both states are interested in increasing this is not an impressive value. But in the general figures of the trade turnover between India and Russia, there is an impressive foundation, which is precisely military-technical cooperation. The total indicators of military-technical cooperation here are such that they make up more than 50% of trade and are close to 80% of the total volume of Russian imports of India. According to the FSMTC (Federal Service for Military-Technical Cooperation), last year Russia supplied weapons in foreign countries for a total amount of 15,2 billion dollars, the main buyer of which was made by the Indian side.

The Stockholm World Research Institute (or SIPRI) cites data that over the past four years, India has bought weapons from Russia for a total of almost 10,5 billions of dollars. In addition to arms purchases, India ordered the repair and re-equipment of large units of military equipment from Russia (the same Sindurakshak, combat aircraft and helicopters). If we add the amounts of the mentioned repair contracts, the total volumes of military-technical cooperation between Moscow and Delhi increase to 16 billion dollars over the last 4-5 years.

Among the contractual obligations of Russia to the Indian side is the re-equipment of the aircraft carrier "Admiral Gorshkov" ("Vikramaditya"), which is to be transferred to India this year, deliveries of more than 7 dozen Mi-17V-5, 970 helicopters aviation engines, several dozen SU-30MKI with technical complexes for licensed assembly production, agreements on the supply of armored vehicles.

If we take into account that India, before 2016, intends to translate into reality plans to increase funding for the modernization of the army to 50 billions of dollars (this is only at the level of imports from other countries in the overall contract portfolio), you can’t miss the opportunity to promote Russian weapons to the Indian market. It would seem that no one is going to miss such opportunities, but still wanting is one thing, and being able is another thing. Any delay in the transfer of the Vikramadityi to the Indian side, any (albeit even the most secret) accident that occurs in India with Russian-made military equipment, unfortunately, does not add to the domestic (Russian) military-technical companies in bilateral relations, no matter turned out to be ultimately guilty in accidents and postponements.

According to forecasts of the World Arms Trade Analysis Center, the Russian share in military technical contracts for the period up to 2016 will drop to 29%, while Israel, the United States and the United Kingdom will significantly strengthen their positions in the Indian market. Such forecasts appeared after the Indian side refused to conclude contracts with Russia for the supply of MI-26T2 helicopters, preferring the American CH-47F Chinook, and also chose the A330MRT aircraft from European Airbus without paying attention to the Russian IL-78MK-90. Only two of these contracts led to the fact that Russia, if I may say so, received almost 2 billion dollars from India. Of course, one can say that it should not have been received by default, given the increasing competition in the global arms trade and related technologies.

A certain circle of specialists suggests that there is no need to “kill” about a hypothetical reduction in the volume of military-technical cooperation with India, but instead you should try to look for additional markets for domestic military equipment. Of course, no one is going to be killed, especially since the reduction in the volume of cooperation so far is associated with single contracts (to win all the tenders and sign all contracts with India is simply impossible by definition). What really causes some concern here is the ephemeral solvency of some other military-technical partners of Russia, in contrast to a truly solvent India. New Delhi pays real money for Russian equipment. At the same time, when buying Russian military equipment, a number of African and Central Asian states are often only attributed to another multi-digit number to their total debt to the Russian Federation, bearing in mind that Russia is a generous country, and then it will be written off in a row. But such write-offs have already happened in the newest storiesand the scale of these write-offs was often so substantial that even multi-billion contracts with India were lost among the written off billions. And for some reason, the write-off often concerned quite fully solvent states ...

That is why even a hypothetical decrease in the rates and volumes of military-technical cooperation with India is not something that scares, but gives food for certain reflections. It remains to rely on the fact that India will continue to remain the main Russian partner in terms of military-technical cooperation, and that all the inconsistencies arising from the operation of our technology in India itself will be analyzed and overcome in close collaboration.

Ctrl Enter
Noticed oshЫbku Highlight text and press. Ctrl + Enter
We are
Mantra "Do in India": Is there a result?Indian business trip Dmitry Rogozin
Military Reviewin Yandex News
Military Reviewin Google News
36 comments
Information
Dear reader, to leave comments on the publication, you must to register.