“These guys viewed default as a commercial operation” 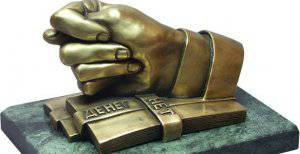 15 years ago, the head of the Russian government, Sergei Kiriyenko (Kindersurprise among the people) announced the introduction of a “set of measures aimed at normalizing financial and budgetary policies” - the default and the devaluation of the ruble. Especially for "AN" to the question "What did the default 1998 teach you?" Are answered ...

“This would completely debunk the whole demagogy of the liberal reformers team.”

- But then it was possible to prevent a default and get out of the imminent crisis. If the planned devaluation had been carried out in the autumn of 1997, we would get all the advantages of the economic growth of 1999-2003. without a sharp decline and subsequent troubles. But this would completely debunk the whole demagogy of the team of liberal reformers and their understanding of economics. In addition, it would lead to the removal of this team from power - and so, despite the default, it not only survived, but over time strengthened its position.

The default was organized by the liberal team, more precisely, its leadership as part of Chubais, Dubinin, Zadornov, Aleksashenko, Kudrin and Ignatiev. Well, the ideological leader was Gaidar.

Maybe there was someone else, but these people definitely made the appropriate decision. Moreover, they implemented a unique stories phenomenon - default on debts denominated in national currency. It would seem, print rubles and pay all the debts - after all, inflation will be so and so. But no, according to the T-bills, the default was declared!

The reason for this, most likely, is that these guys viewed default as a commercial operation and warned “their own” people to leave the T-bills. As a result, that part of the new business that has grown, bypassing privatization, that is, in an honest way, has suffered greatly. Without a "friendship" with bribe-based liberal reformers.

David Yakobashvili, President of the RusBrand Non-Profit Partnership, Chairman of the Board of Directors of Wimm-Bill-Dann Foods OJSC, Member of the RSPP Bureau:

“Crisis has become for all a certain kind of measure”

- Yes, the crisis made us concentrate, otherwise we were slightly relaxed before him. So we concentrate and try to show ourselves from the best side. You can say now we are fighting.

But before, in fact, it was a completely different time, and since then everyone has changed a lot. That is, everyone during the crisis showed what he is capable of and much more.

Many showed themselves from the negative side, some pettiness appeared in people, and dishonesty began to crawl out. But, on the other hand, in someone, on the contrary, it was during the trials of the crisis that the decency suddenly manifested itself. The crisis has become for all a certain kind of measure, because during a difficult situation, people themselves and manifest for real.

But, as you know, crises primarily occur in the minds. And the main and most important thing that can be done to overcome it is the restoration of confidence and consumption.

Mikhail Delyagin, Director of the Institute for the Problems of Globalization:

- Like Putin now, Yeltsin 15 years ago completely transferred the issues of socio-economic policy to the liberals, and they led him to a completely natural disaster. I think that the same will happen with Putin, just a little later - due to slightly different oil prices.

Now the socio-economic bloc in Russia is led by the heirs and disciples of the authors of default, who are leading the country to a catastrophe. Dvorkovich is a loyal liberal, Shuvalov is a loyal liberal, has long been Voloshin’s left hand. Ulyukaev - faithful Gaidar. Siluanov from the Ministry of Finance is a student of Kudrin, the first deputy minister of finance at the time of default and shortly thereafter. And who is Mrs. Nabiullina? Whether a graduate student, or just an assistant to Mr. Yassin ...

Stealing and lying as a state strategy continues today, and they make the state incompetent.

As soon as the state refuses to serve the people, it turns into an aggregate of separated gangs who cannot agree among themselves and, even realizing this, still lead the country to a catastrophe in which they themselves will die!

Before the default, people saw and realized that the country was headed by effective and professional managers who professionally and effectively rob them. As a result - fierce hatred!

After the default, the country saw that non-professionals stood at the head of the government (while in Russia there was an insanely low standard of living), but people understood that the state is trying to do something to normalize life.

After the default, society turned out to be healthier than before it, not because people were forced to survive, but because they saw that they were ruled by at least partly responsible people.

When strong Soviet managers, Primakov, Maslyukov and Gerashchenko, came to rake the “Augean stables” (no one would turn the language to accuse them of theft), people saw that this team was really trying to pull the country out of the hole.

Yevgeny Yasin, Scientific Director of the Higher School of Economics:
“There was not enough understanding in Russian economic circles”

- You should not look for someone guilty in the 1998 technical default of the year. The reasons for its occurrence were many: the heavy legacy of the USSR, from which Russia took on debts, 4,5 times the total capital of its banks, insufficient development of a market economy, inconsistency and inopportune actions of various players, underdevelopment of the banking system and much more.

In 1996, a lot of money was spent on presidential elections, there was no money in the treasury, so it was decided to issue state short-term liabilities (T-bills) to borrow under them.

So the 1998 crisis of the year was inevitable. To be honest, I thought that we would enter it earlier, but the crisis in Asia broke out, and this played into our hands. Russia was second in line after the countries of Southeast Asia, but did not pay attention to signals coming from there (for example, oil cost 15 dollars per barrel), as it was busy with its own problems.

Attempts by Western experts to warn of impending danger turned out to be ineffective, because in Russian economic circles - due to the novelty of the phenomenon - there was not enough understanding of how market mechanisms work.

“Only a diversified economy can be the answer to an inefficient raw materials economy.”

- The crisis helped me to believe with even greater force that the Russian small and medium business is undervalued and has simply enormous potential to move our economy forward.

The answer to an inefficient commodity economy can only be a diversified economy with a very deep market structure, where there will be strong competition that encourages innovation as a means of competition. And then, accordingly, the level of competitiveness will increase more and more.

“The crisis made it more efficient and more intensive to work”

- The crisis helped us, because it made us work more efficiently and more intensively. Indeed, in times of crisis and a fall in commodity prices, interest in innovative technologies begins to grow.

- So far, nothing has changed. The world system is still built taking into account the leading position of the United States, which remained the main world economy, and there are no fundamentally different ready-made ideas today.

Fluctuations in the US market results in much larger fluctuations in the Russian market. We do nothing to counteract the decline in production. It was necessary to reduce taxes, expand state demand and provide cheap loans.

The devaluation of the ruble at best can be smooth, and if there are errors in the monetary policy, then a landslide. Unfortunately, with inadequate actions of the Russian monetary authorities, the situation depends only on an external factor: on the growth of prices for raw materials.

Such a monostructural economy, as in Russia, focused primarily on the export of raw materials, is very unstable to crises, and not only to its own, but also to those that occur in those countries to which Russia exports raw materials.

Ctrl Enter
Noticed oshЫbku Highlight text and press. Ctrl + Enter
We are
What we lostYou can not win - join
Military Reviewin Yandex News
Military Reviewin Google News
25 comments
Information
Dear reader, to leave comments on the publication, you must to register.